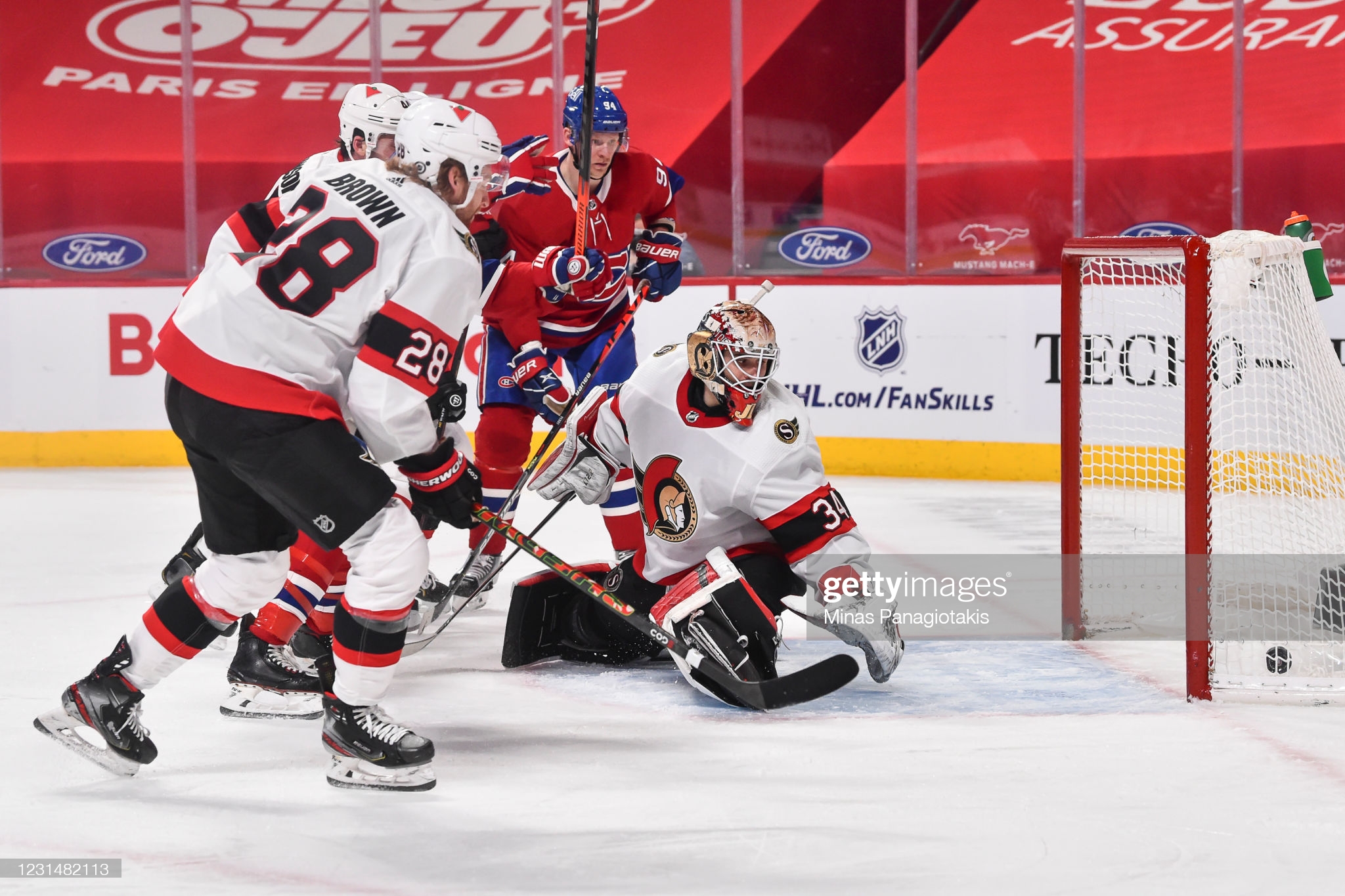 Despite their late efforts, the Ottawa Senators fell short in their 3-1 loss last night against the fourth place Montreal Canadiens.

Ottawa played a relatively solid game considering they were coming off of a back-to-back from playing Calgary the night before in a 5-1 crushing victory.

Drake Batherson almost broke the record for the longest goal scoring streak in Senators history, Joey Daccord turned heads as he suited up for his second NHL game, and Erik Gudbranson might’ve very well cost his team the two points.

This one is going to be fast and brutally honest for one of these players. Let’s get this show on the road.

Are you kidding me? What a courageous performance we got to see from someone who we’ve begged for a long time now to get the nod from D.J. Smith. Joey Daccord looked majestic last night. He seemed calm in net and he answered the bell when the Senators’ defence let him down on multiple occasions in their own zone.

For someone who started this season in Belleville and didn’t look all that great there, Daccord indefinitely made a name for himself after a performance like we saw Tuesday night. His quickness in net is a factor that stuck with me as the game went on. He doesn’t ever seem to struggle getting from one post to the other, and he manages to stay square to the puck at all times while knowing how far out he should be from his blue paint. The agility in Daccord is also something that stuck out like a sore thumb. The movements in net whether it’s getting down in the butterfly position, or whatever else, looked incredibly smooth from Daccord. It’s almost like we should’ve played him earlier in the season! Who would’ve thought?

The goaltending landscape gets really interesting for the Senators now. You have Matt Murray, a guy you went all in on by acquiring him and signing him to a long-term deal, and now you have Joey Daccord. It’s unclear how long Marcus Hogberg will be out after he was placed on IR in February. I think you ride the hot hand and keep playing Daccord when it’s suitable until Hogberg returns. Even with the eventual return, he’s been a nightmare in net for Ottawa and if Daccord proves he’s better, D.J. Smith should award him with the backup job.

Overall, Daccord really impressed me last night as he did with many other Sens fans. Let’s just say that if the Seattle expansion draft was happening tomorrow, you’re probably protecting Joey Daccord after seeing what he brought to the table last night.

Erik Gudbranson has seen himself in this spot many times this season. And to be completely honest, I’m not going to keep repeating myself anymore or beating the already dead horse. Gudbranson is not someone who should be employed by the Senators right now, except he unfortunately is and it’s costing this team some crucial wins.

If Ottawa was getting blown out 5-1 when he made those two huge errors, I’d probably give him more leeway than I am right now. Except, in one sequence it was not knowing how to dump the puck in and avoid the icing, and the next sequence showed Gudbranson not having any discipline in himself when Gallagher got the initial goal for Montreal. I really don’t know what Gudbranson was thinking and I’m not sure I care either anymore. Find a solution for this. If it means a trade, get a trade done and upgrade your defence on the right.

The fourth line: Honestly, what did we just witness? I don’t recall them sustaining much offensive pressure in the Montreal zone. I’d be shocked if there was any at all. Micheal Haley being put into this lineup ahead of Matthew Peca is jaw dropping to see. Artem Anisimov, that’s someone who I’ve lowered my expectations on heavily as the season has progressed, and Austin Watson didn’t look great either coming off of a solid handful of games where he actually looked useful.

Listen, did the players play poorly? Yes. Did they make the lineup decisions? No. So, as much as I blame them for their poor player (which is still deserved) D.J. Smith needs to get his act together. There is no reason to put Haley into this lineup ever again this season. Play the games in a fashion that gives you the best chance to win them. Icing Haley for six minutes isn’t how you do that.