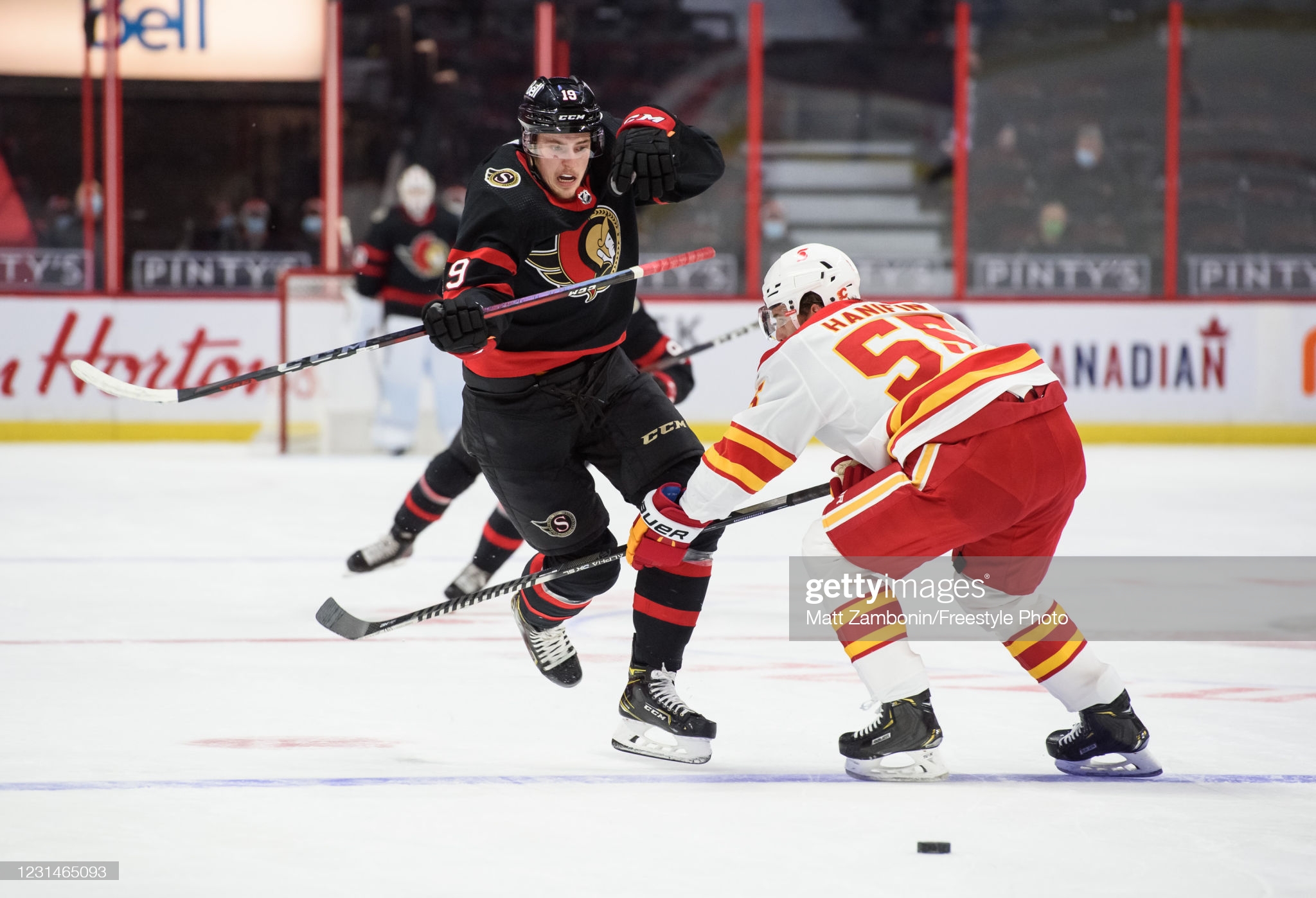 The Calgary Flames have come and gone (for now) and the Ottawa Senators managed to grab four out of a possible six points.

Monday night was a complete 180 from what we saw on Saturday afternoon. The Ottawa Senators came out guns blazing once again, and Drake Batherson proved why he’s the most lethal shooter on this team right now.

Let’s get this show on the road.

The last time I wrote a report card, Drake Batherson was in this spot after a strong showing. It’ll be no different after tonight’s game. Batherson is starting to make a real name for himself for the Senators. His shot is incredible, he can keep up with the pace and he looks better with every shift out there recently. He extended his goal streak to six games tonight in the win. While doing that, he also tied Jason Spezza for the longest goal streak in franchise history.

Batherson has looked superb for a long time now. The only difference between now and February, is that he’s actually capitalizing on his chances. To think that the Senators were going to scratch this guy at some point. Craziness. Once again, Batherson impressed tonight and was electric for Ottawa on the ice. The line he shared with Norris and Stützle seemed to be clicking well. They all seem to have some sort of chemistry together. D.J. Smith needs to roll with those three more often after that great outing.

The Senators have been in dying need of a solid scoring winger this season *besides Tkachuk* and it looks like they’ve found one in Batherson. With every game that passes, his confidence and level of play keeps skyrocketing. It’s a beautiful to see if you’re a Senators fan right now. With his pair of goals tonight, he now ties himself with Tkachuk as the scoring leader on this team.

Drake Batherson is a treat to watch right now. He clearly posses all the skills that a successful NHL winger needs nowadays. The speed has always been there and now his craftiness and shooting is also coming to light. I don’t expect him to slow down anytime soon, either.

Going into tonight’s game, it was announced Coburn would be drawing in for Erik Brannstrom. A roster move that left many Sens fans scratching their head.

As expected, Coburn didn’t look great tonight for the Senators. He took a high-sticking penalty just 7:40 into the first period sending the Flames to their first PP. Even with the penalty being killed off quite well by the Senators, he looked out of touch on the ice and didn’t really do anything that made me enjoy his presence in place of Brannstrom.

If you ask me, that wasn’t even the worse thing about his play tonight. Every player is going to take penalties. What bothered me most was his lack of care on the Milan Lucic goal in the second period. He ties up his defender as Murray makes the initial save, but gets way too tangled up and can’t clear the puck before Lucic jumps on his own rebound.

Granted, Mike Reilly deserves some criticism on this play too. Although, for someone who filled in for Brannstrom, a player that’s looked so good for the Senators in the last few games, I wasn’t too impressed with Coburn. There’s no reason why Brannstrom shouldn’t draw back in tomorrow night when the Senators suit up against the Montreal Canadiens on the road.