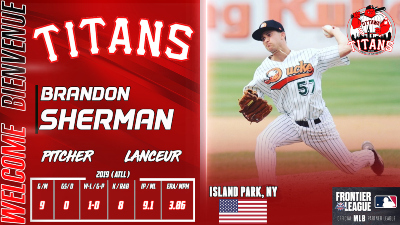 The Ottawa Titans report the club has signed left-handed pitcher Brandon Sherman and outfielder Kevin Connolly for the 2021 season.

Sherman, 25, enters his second year of professional baseball and is coming off a championship performance with the Atlantic League’s Long Island Ducks in 2019. The Island Park, NY, native was 1-0 with a 3.86 ERA in nine relief appearances.

“Brandon Sherman comes to Ottawa highly recommended by our own Cody Mincey,” said Titans manager Steve Brook. “Sherman features plus stuff from the left side and will compete for a position on our 2021 starting rotation. He’s a young kid with a huge desire to be successful this season and beyond. We are pumped to have Brandon with us.”

A graduate of Nassau Community College, Sherman attended the Ducks open player tryout and received an invitation to spring training. Prior to the Atlantic League, he pitched with the Long Island Black Sox in the Zorrilla League.

Connolly, 26, joins the Titans from the Liberation League’s California Dogecoin, where in 2020, the 6-ft.-2-in. outfielder hit .356 with two home runs and 29 RBI’s in 35 games. Connolly ranked second on the team in average amongst qualified hitters, along with first in slugging percentage (.444), hits, home runs, and runs driven in.

“Kevin Connolly has worked extremely hard to be put in a situation to compete for a position on the 2021 roster in Ottawa,” said Brook. “I first saw Kevin prior to the 2019 season in an open workout – and really liked what I saw. He brings a professional approach to his at-bats and wants to prove that he deserves to play at an elite level. I’m very excited to see what he can do with us this season.”

A graduate of Creighton University (Omaha, NB), Connolly will enter his fourth season of professional baseball. In his college days, Connolly notched a 12-game hitting streak, along with ranking second in stolen bases (13) in his sophomore season.

Connolly has also had stints in the Pecos League and Pacific Association, where he is a career .315 hitter, with eight home runs, 46 RBI’s, and an on-base percentage of .406 in 84 games.

The Titans open the Frontier League season at RCGT Park on May 27 versus the Tri-City ValleyCats.