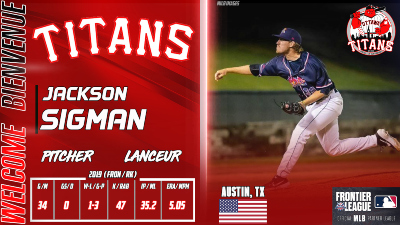 Sigman, 25, was with the American Association’s Fargo-Moorhead RedHawks in 2020.

“The addition of Jackson Sigman is a major boost to our back end bullpen depth,” said Titans manager Steve Brook.

“Jackson really came into his own during the first half of the 2019 season as our closer. He brings tremendous energy to the mound and pitches with confidence. I’m excited to see what he will accomplish with us in Ottawa this year.”

The Austin, TX, native has had two different stints in minor league baseball with the Kansas City Royals (2017) and Milwaukee Brewers (2019) organizations.

A graduate of the University of West Virginia (Morgantown, WV), Sigman will enter his fifth season of professional baseball. The 25-year-old was a part of the River City Rascals in 2019, going 1-1 with a 0.77 ERA across 11.2 innings pitched, with opponents hitting just .171 against him before his contract was purchased by the Brewers.

Milwaukee assigned Sigman to the Pioneer League’s Rocky Mountain Vibes where he went 0-2 with a 7.13 ERA in 24 innings pitched.