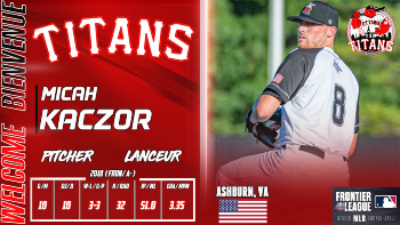 The Ottawa Titans continued to fill out the pitching staff on Friday with the signings of hurlers Cody Thompson and Micah Kaczor.

Thompson, 24, enters his second season of professional baseball as he spent the 2019 season with the Southern Illinois Miners of the Frontier League. In 16 games, including three starts, Thompson went 3-2 with a 4.97 ERA in 41.2 innings, striking out 32.

The Mechanicsville, VA, native can also play the outfield, where he spent 17 games in 2019.

“Cody Thompson has a lot to prove in the Frontier League this season,” said Titans Manager Steve Brook. “I was able to see him personally this fall at a workout with the Gateway Grizzlies and I jumped at the opportunity to sign him on the spot. He’s pitching with a chip on his shoulders and is ready to prove that he deserves to pitch at this level and beyond.”

Kaczor, 23, played for Brook during the 2019 season with the River City Rascals. He started four games, going 2-1 with a 1.46 ERA in 24.2 innings pitched. In July, Kaczor had his contract purchased by the Colorado Rockies.

“Micah is a competitor on the mound and pounds the strike zone,” added Brook. “I’m very excited to have him back with me in 2021 and pumped to see what he can do for the Titans this season.”

The Ottawa Titans are scheduled to hit the field in late spring of 2021 playing in the Frontier League, a partner league of Major League Baseball.