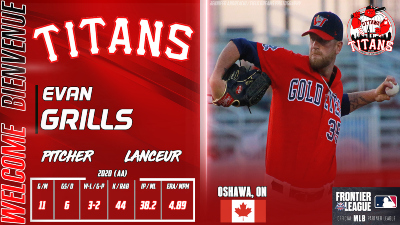 The Ottawa Titans report that they have signed Canadian left-handed pitcher Evan Grills.

Grills, 28, was a 10th round selection of the Houston Astros in the 2010 MLB Draft out of Sinclair Secondary School in Whitby, ON.

The 6 ft.-4 in. lefty reached Triple-A twice in his minor league career, with both the Astros and Colorado Rockies organizations.

“I am thrilled to add Evan Grills to our 2021 pitching staff in Ottawa,” said Titans manager Steve Brook. “Grills is a professional both on and off the field. He has extensive experience as a starting pitcher for both the Rockies and Astros organizations. I’m very excited to see what he can accomplish this season with the Titans.”

He was sidelined for the entire 2017 season after receiving Tommy John surgery.

After being released by the Astros, Grills signed a minor league contract with the Rockies, earning an invite to big league spring training.

He left affiliated baseball for the American Association’s Winnipeg Goldeyes in 2020 where he appeared in 11 games, sporting a 3-2 record, tossing 38.2 innings, and holding a 4.89 ERA.

Grills currently resides in nearby St. Albert, ON, and holds duties as pitching coach for the Ottawa-Nepean Canadians youth baseball club.