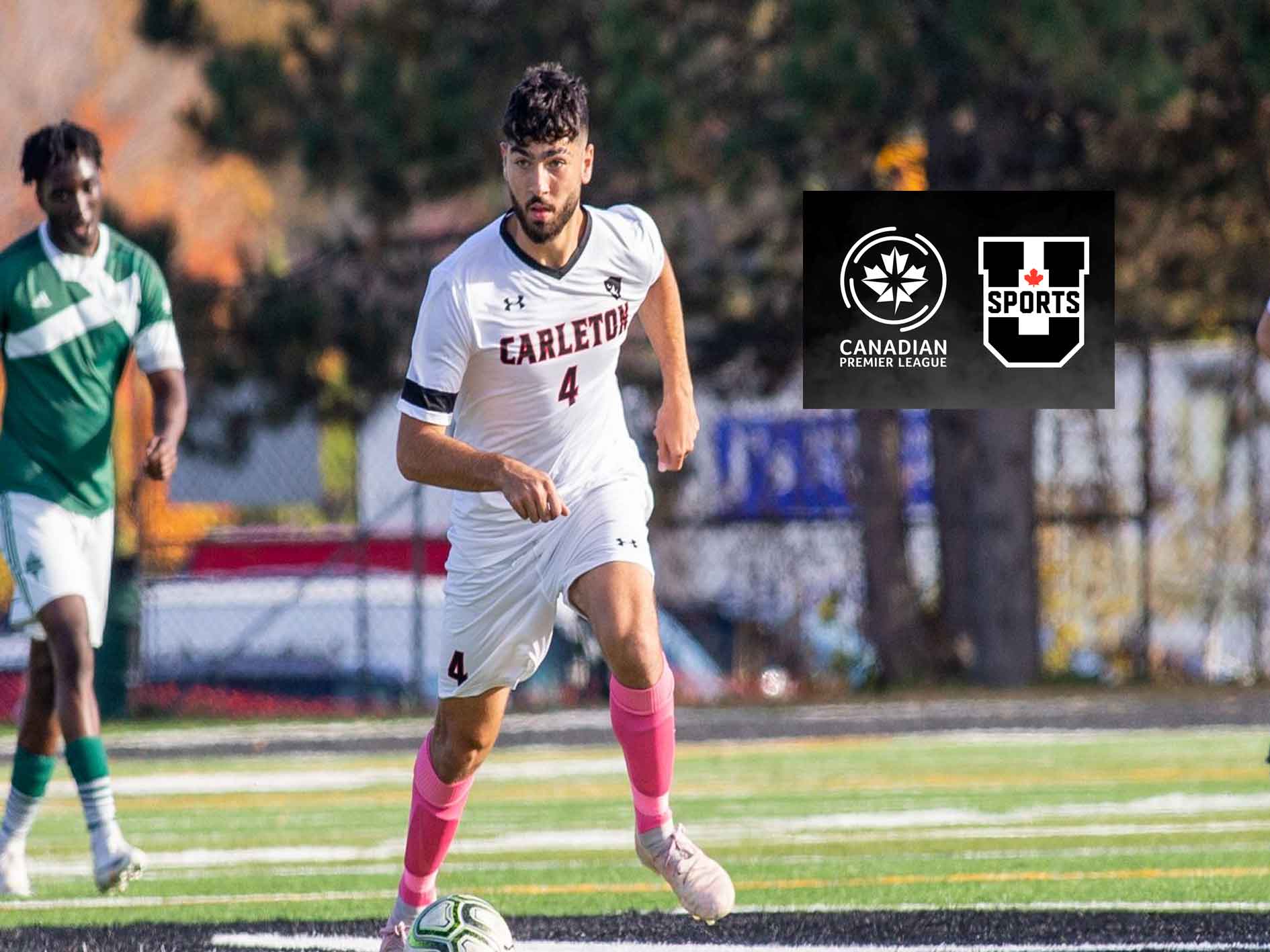 On Friday, January 29th, the third-ever U-Sports CPL draft will occur with Atlético Ottawa having the 2nd and 15th overall pick. Atlético Ottawa isn’t the only Ottawa connection in this draft as 5 Carleton Ravens players are eligible for this year’s draft. To discuss these five players, Carleton Men’s Soccer Head Coach Kwesi Loney took some time out of his day to give some insight about each player.

This will be Gabriel Bitar’s 3rd draft. Bitar was the first ever draft pick back in 2018 and was taken by Cavalry FC. In 2019, Cavalry chose him again but at 6th overall.

“Gaby is a player that everyone is attracted to. He’s that offensive-minded threat. When he’s on the ball, he’s dangerous because he can dribble, break lines, is great in 1v1’s, and he can score. Gaby has the ability to score inside and outside the 18, and on set pieces, he’s very dynamic in the attacking third, which makes him a very attractive prospect.”

Bitar finished the 2019/20 U-Sports season with 6 goals and 2 assists in 13 appearances. Due to U-Sports suspension, Bitar played 7 games in the PLSQ for OSU, where he scored 4 goals. As mentioned, Bitar was drafted by Cavalry twice, where he played 209 minutes in 3 appearances. It will be interesting to see if Cavalry takes a third shot at Bitar or if another team decides to take him.

Kwesi Loney had many positive things to say about this young player who is mocked to go 2nd overall by the CanPL Virtual Newsroom.

“Dario Conte is one of the most put-together center midfielders that I think we have in Ontario; he’s been recognized as one of the top players in the country for the past 2 years. Dario has a very high IQ when it comes to the game; he plays more of a holding midfielder role. He has excellent vision, great left & right foot, distributes the ball sharply and most recently has gotten into scoring with all the goals being long-distance strikes, so he has quite the range for his scoring and passing abilities.”

Dario Conte had 3 goals and 1 assist in 12 appearances in the 2019/20 season. Whatever team lands him will have a bright prospect on their hands.

This will be Stefan Karajovanovic’s second draft. Last year, York took him 5th overall but he only played 22 minutes in 2019 before returning to Carleton University.

“Stefan is a player that has grown for us the last few years. A striker that scores goals and his biggest attribute is that he is consistent. Every year he is scoring upwards of 10 goals. He’s your prototypical number 9. He can play with his back to goal, he can play behind the back four, very comfortable dropping back and receiving the ball, link-up play is very good, and he can score in a multitude of ways. If anyone in the draft is looking for an out and out number 9, Stefan is that player.”

During the 2019/20 season, Karajovanovic scored 8 goals in 12 appearances which is a stunning form. The CanPL Virtual Newsroom has Karajovanovic going 15th overall to Atlético Ottawa but it would be a big surprise if Karajovanovic falls that far.

22 of the 48 players who are declared for the draft are defenders and Malekos is one of the top ones in the draft.

“Chris is a great player and has been acknowledged by the OUA as one of the top defenders for the last 4 years he has played with us… He is a physical presence. Chris is 6’2, great in the air, very dominant in tackles and 1 on 1 duels. He understands his role very well. He has good distribution out the back can play the 5-yard ball through a pinhole but also the 40-yard diagonal ball. He is a warrior on the field.”

Chris is your stay at home solid that every team needs but with only 16 total picks, it will be interesting to see if a team drafts him.

Tony Mikhael is another centerback that declared for the draft.

“Tony over the two years has probably played the most minutes out of all the players we have in this draft. Even though Tony also plays center back, he is more of a technical ball-playing center back, reads the game extremely well, is very composed on the ball, and understands how to use his body weight very well to keep possession. Definitely more of a possession-oriented center back. I also feel he is very versatile, can play anywhere across the black four and can step up to the midfield and play holding midfield.”

Tony Mikhael is also a U-21 player which could give him advantage to teams looking to reach that U21 minute minimum.

When asked what it meant to have 5 players who are eligible for the draft Kwesi stated, “It’s nice to be recognized, it’s a great acknowledgement to our program and a great recognition for the players and what they accomplished over their career. “

Carleton Raven’s men’s soccer team has quickly become one of the country’s top programs, winning the OUA Championship for the first time in 2019 and finishing 4th in Nationals. Seeing Carleton Ravens players in the draft will soon become normality, and it will be exciting to see some of these players and other prospects in the league!

The U-Sports Draft will be held live on Friday at 3pm and one can watch it on One Soccer.