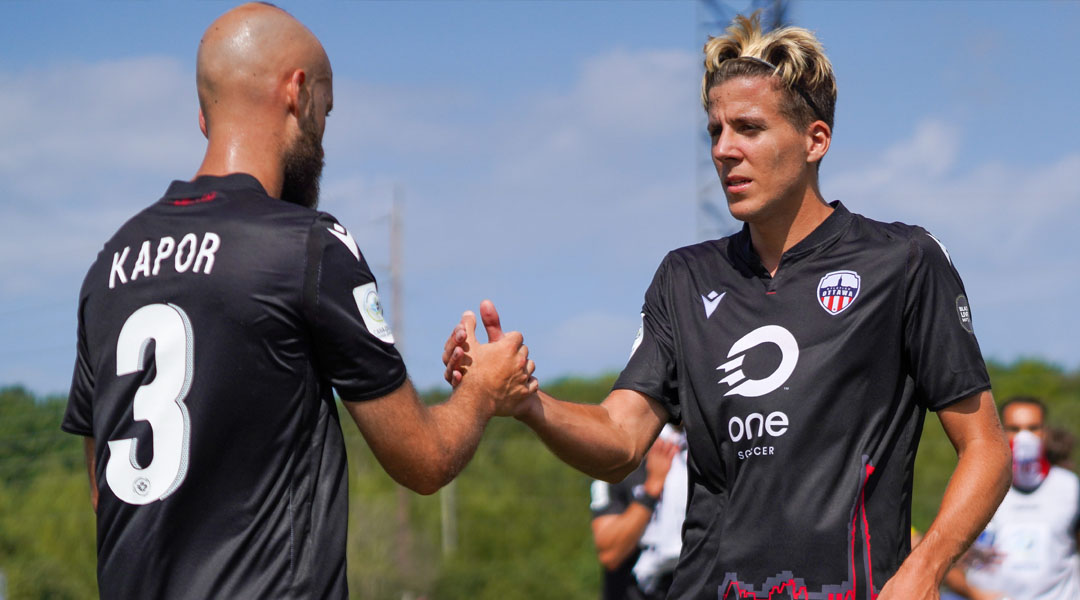 I don’t need to tell you that this year was awful for sports. No fans were allowed at games and sports leagues had to find different ways to keep playing. Obviously, in typical Ottawa fashion, this was the year that Atlético Ottawa joined the CPL. Despite all the issues that came with this year, CPL was able to have a season and Atlético Ottawa fans were able to enjoy their new professional soccer team. In this article, I will go through the top moments from this year (in no particular order)

Tuesday, February the 11th was officially declared Atlético Ottawa day by Mayor Jim Watson and it was a day of celebration. The official unveiling was packed with reporters and dedicated soccer fans in the middle of the day all excited and hopeful for this new franchise owned by one of the biggest football clubs in the world. The celebration didn’t stop there, in the evening hundreds of people packed Craft Beer Market to create an electric atmosphere to celebrate soccer being back in Ottawa. I hadn’t seen a soccer event that electric in years in the city and it set the tone for what both the team and the fans should expect moving forward.

Now while this schedule was very short-lived, when it was announced it created a pretty big hype in Ottawa. Immediately, the local Supporters groups started planning road trips to Hamilton and York and many people were circling games that they couldn’t wait to watch. This may seem like a minor event, but this was the first time in years that Ottawa fans would be able to make realistic road trips. I am hoping that in 2021, Ottawa fans will be able to show up in Hamilton and York and everywhere across the country.

You can’t have a soccer team without players, and after weeks of fans trying to figure out the first signings, Atlético Ottawa finally announced them. Ben Fisk and Antoine Coupland were the first two players signed by Atlético Ottawa. While both were highly rumoured, fans were ecstatic about these signings. Ben Fisk was a marquee player in the entire league in the previous season and immediately started engaging with the local community. As for Coupland, the then 16-year-old was a fan favourite in Ottawa when he played for the Fury and fans were extremely excited to see this young homegrown talent continue to grow in Ottawa.

When the country entered a lockdown, many fans were devastated because it meant that they wouldn’t be able to see Atlético Ottawa play. Many people were also worried about the impact this would have on the young Canadian Premier League. Luckily, the CPL had a solution to this problem: The eCPL FIFA tournament. For those who didn’t watch, one player from each CPL team teamed up with one of Canada’s top FIFA 20 players and faced other teams in a knockout style tournament. What made this event fun was the practice streams each player did. Fans were able to watch Malyk Hamilton stream and some were lucky enough to play against him. This built a fast connection between the fans and the player as Malyk was able to ask questions about Ottawa and fans were able to ask questions about Malyk. Malyk and his partner Agit Katilmis made it to the finals where they lost to HFX. This online event welcomed Atlético Ottawa to the CPL world of banter and it was a really fun moment.

Every CPL team had their home kits launched before Atlético announced theirs. Wanting to make a splash, Atlético Ottawa had their kit launch later. 600 unique connections attended this launch virtually and it was a fantastic event. 4 members of the soccer community in Ottawa (supporters groups, journalists etc..) had received the jersey in a box a couple of days before, and at the event got to unveil the kit to everyone watching. This minor detail is really important as it shows how the team wants to engage with supporters. It’s an important aspect that many sports teams don’t realize and Atlético Ottawa did a great job with this event.

The first ever goal

Mohamed Kourouma will go down in history for scoring the first-ever goal for Atlético Ottawa. Fans only had to wait till the stroke of halftime before being able to celebrate a goal and the player celebration was even better. Fans could see how much passion was in this team. Although Atlético Ottawa dropped points in this match, no one will forget the first-ever goal.

It only took Atlético Ottawa 3 games to break a CPL record. 22 seconds into the game against Edmonton, Francisco Acuña scored and that is now the fastest goal in CPL history. Once again, Ottawa dropped points but they are now in the record books for the fastest ever goal!

It took Atlético Ottawa 3 games to break a record, and 4 games to have the CPL goal of the season. Malcolm Shaw put the icing on the cake for Ottawa’s first-ever victory with an incredible strike past the Cavalry keeper. A fantastic goal call courtesy of One Soccer makes this an incredible moment for Atlético Ottawa and their fans.

It was a do or die situation for Ottawa. They needed a win against Pacific FC to keep their playoff hopes alive and they chose the dramatic route to do this. Viti Martinez in the 90th minute smashed the ball in the back of the net to give Atlético Ottawa all 3 points. The best part of this moment was the ensuing celebration. The passion displayed by the entire team really gave hope to the fans that maybe, just maybe we could make the playoffs.

I believe the best moment that came from this year was the Black Lives Matter movement. In the game against Cavalry FC, at the 8 minutes and 46-second mark, the game stopped and everybody took a knee including players from the other 6 CPL teams. This protest was organized by the players and it showed that there are more important issues going on in the world than just sports. Many fans were very proud of this moment and everyone is hoping that the league continues to combat racism in any way that they can.

Despite not having a season in Ottawa, this team brought entertainment to the city and helped people make some new connections. Based off what we saw this year, this team will not be pushed around easily and will always be competing. They appear to be listening to the fans and supporters and are continuing to build connections and relationships. Here is to hoping that 2021 will be a much better year!