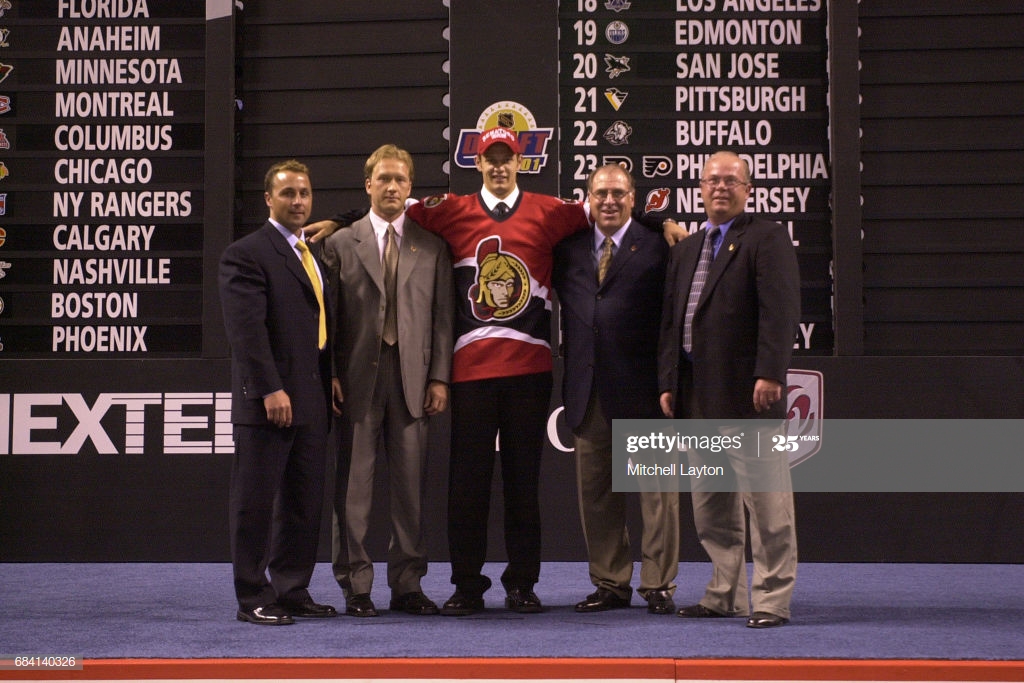 Earlier this week we posted an article outlining the worst five first round picks in team history to get all the bad vibes out of the way early in lottery week. With the lottery rapidly approaching it is now time to put as many good vibes as possible into the Sens world, hoping we can sway the hockey gods to reward Sens’ fans for our recent suffering. Without waiting any longer, let’s get right into the top five!

While the relationship between Yashin and the Senators went VERY sour towards the end of his time with the team, there is no denying he was the most dominant offensive threat in the early days of the organization. The Sens selected Yashin with the second overall pick of the 1992 draft and his rookie season did not disappoint. He posted 30 goals and 79 points in his 83 game rookie season. Yashin was near or at the top of the team in scoring every season in Ottawa. When things went sour and he was finally traded the team got back Zdeno Chara and the pick that would become Jason Spezza. Fans may not love him, but Yashin was a huge pick for this team.

Phillips was selected first overall by the Sens in the 1996 Draft. He would go on to become a pillar of the organization for over a decade. Phillips played 17 seasons in the NHL all with the Senators and never played a single game in the AHL. From day one he was a steadying presence on the team’s blueline and it is impossible to ask for much more value than a franchise leader in games played from a first round pick. Phillips is one of the team’s best first round picks in its history.

The 12th overall pick of the 1997 draft was a home run for the Senators. He quickly became a fan favourite in his seven seasons with the team. He surpassed 25 goals five times with the Senators and was a key contributor to the dominant Senators teams of the early 2000s’. Stop me if you’ve heard this before, but a contract dispute resulted in the fan favourite being traded by the Sens. The trade would bring in a very polarizing figure to Sens fans, the all-star Dany Heatley. Even though he was traded by the Sens early in his career, the now hall of famer is one of the team’s best first round picks.

As mentioned earlier, Spezza was drafted with the first round pick acquired in the Yashin trade. Spezza was drafted second overall in the 2001 NHL Draft by the Sens. Spezza would go on to play 11 seasons for the Senators, where he was the first line center on the best teams in franchise history. Spezza is arguably the greatest center the team has ever had and was a truly dominant force during the ‘pizza line’ days with Alfredsson and Heatley. Unfortunately pressure from fans and the media lead to Spezza requesting a trade from the Sens, however there is no denying how much he meant to the team during his time in Ottawa.

Arguably the most talented player to ever play for the Senators, nobody else deserves the number one spot on this list more than Karlsson. Karlsson was selected 15th overall by the team in the 2008 draft and the rest is history. Karlsson won two Norris trophies with the team, and deserved a third in the season he was a point per game player with 82 points. Karlsson set the record for most points in a season by a Swedish defensemen, was the first defenseman since Paul Coffey (1985-86) to finish top five in league scoring, and the first defenseman since Bobby Orr in 1974-75 to lead the league in assists. Karlsson provided fans with so many amazing memories, moments and highlights during his time in Ottawa it is hard to put into words how incredible he was on the ice. One can only imagine how much BETTER he could possibly have been if he never met Matt Cooke. Karlsson is without a doubt the best first round pick in team history and one of the best Sens players period. Hopefully the team will be adding some more players to this list in this year’s draft!