Senators numbers through the years 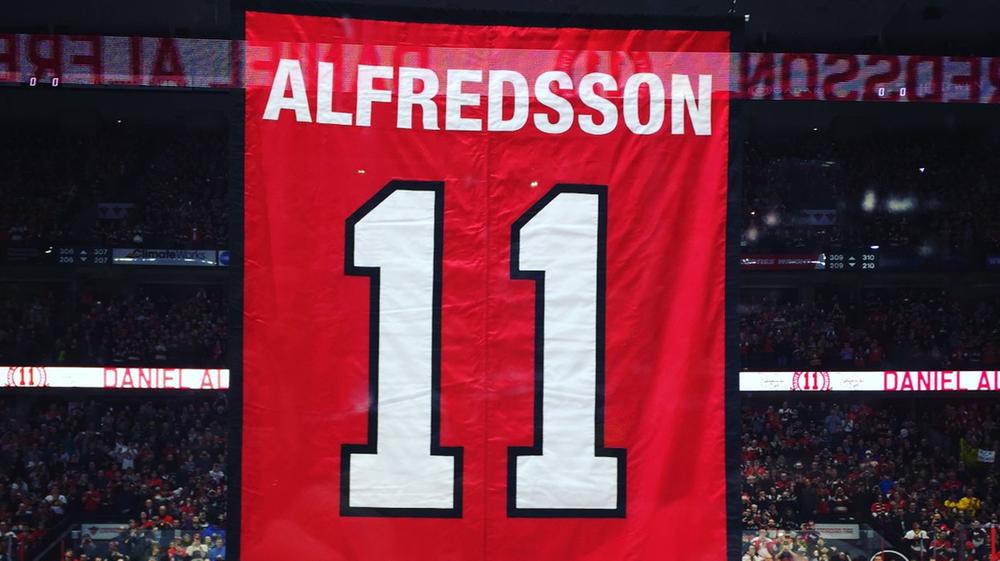 It’s a difficult time to be a sports content creator, with no sports being around. However, this quarantine period is a great time to reach into the creative box and bring Sens’ fans a new series. Every week we will be going through jersey numbers and we will try to choose the best or most iconic player to wear that number for the Ottawa Senators. This week, we will be going through numbers 1-25. *Note* Total games played and Total points are for regular season only*

Starting off with Number 1, this spot has to be reserved for the late Ray Emery. Emery played for the Ottawa Senators from 2005-2008, playing 134 Games and winning 71 of them. He also started in the Stanley Cup Finals and participated in one of the best goaltender fights in recent history.

There are a number of recent players who have worn this number for the Sens. Jared Cowen, Dion Phaneuf and Dylan DeMelo being the recent ones. However, despite trying to force Lance Pitlick on this list, Jared Cowen spent the longest time with this number as a Senator. Playing for 5 seasons, 248 games and earning 46 points. This Senators first-round draft pick makes our list for #2.

For this number, I had two players in mind, Zdeno Chara and Marc Methot. Both defensemen were a key part of the Senators team and I had a tough time deciding. Therefore I went on Twitter (@613_sports) and asked the fans, and Zdeno Chara edged out Marc Methot. Looking at the statistics it makes sense as Chara played in Ottawa for 4 seasons, racking up 146 points in 299 games. On the other hand, while Methot was a fan favourite and a perfect defence partner for Karlsson, in his 5 seasons in Ottawa, he racked up 69 points in 304 games. This is why I will be giving #3 to Zdeno Chara and he will always be that player that Sens fans will think: “What if…”

This one is easy. Chris Phillips, one of two players to have their number retired holds down Number 4. Phillips was drafted first overall by the Senators in 1996 and ended up playing 17 seasons and is the longest-serving player in franchise history with his 1293 games played.

This number is a difficult one. The two players I have in mind are defencemen, Christoph Schubert and Cody Ceci. I did say that this article was about the best player to wear the number but looking at this analytically, Ceci technically holds more history with that number. Both Schubert and Ceci were drafted by the Ottawa Senators (Schubert in 2001 and Ceci in 2012). Schubert spent 3 years in Binghamton and then 4 seasons with the Sens playing in 268 games, finishing with 65 points. On the other hand, Ceci, who was born in Ottawa and played 4 seasons for the 67s, was then drafted by the Ottawa Senators and went on to play 6 seasons with them. While there were a lot of complaints about Ceci, and a lot of them were valid, he did play in 440 games and finished with 118 points. Therefore, I will give Cody Ceci the number 5, just based on the history he has with Ottawa.

When thinking of the number 6, recent fans might think of Bobby Ryan or Chris Wideman. However, this spot is reserved for Wade Redden. Redden spent 11 seasons in Ottawa including the 2007 Stanley Cup run. He ended up playing 838 games and finished with 379 points.

Fan favourite Kyle Turris holds this spot. Turris, after being traded for David Runblad took his number and created a mini legacy with it. The gold chain spent 7 seasons with the Sens (Ironic) and deeply impacted the team on and off the ice with Kyle spending a lot of his free time with the Capital City Condors. It was a very sad day in Ottawa when he was traded to the Nashville Predators and ended with 407 games and 274 points with the Sens. While Turris is the best player to wear 7 so far, Brady Tkachuk has that number now and there is no doubt he will replace Turris on this list one day.

The Number 8 has never been used by the modern-day Senators as that number is retired for  Frank Finnigan of the original era Senators. Finnigan played for the original Senators for 10 seasons, playing 368 games and finishing with 153 points.

While Bobby Ryan and previously Milan Michalek held this number, the best player to wear this number is Martin Havlat. Drafted by the Senators in 1999, Havlat spent 5 seasons with the Sens, playing in 298 games and finishing with 235 points.

If I was Guy Boucher, this number would be retired for Tommy Pyatt. However, in my opinion Andreas Dackell is my choice. Dackell played for the Sens from 1996 – 2001 playing in 5 seasons, 401 games and finished with 180 points.

The ladies will love this one as Mike Fisher takes this spot. Fisher was drafted by the Senators in 1998 and ended up playing in Ottawa for 11 seasons, playing in 675 games and racking up 348 points. Fisher was and still is a fan favourite and whenever he is in town for Sens games he always receives a warm welcome. Number 12 will always be his number.

Vinny Prospal has saved me from picking Nick Paul for this list. Vinny Prospal played for the Sens for 4 seasons, playing in 213 games and racking up 111 points. Now to be fair, Nick Paul could eventually take over this list, but today is not the day.

Radek Bonk takes the number 14 spot. Bonk actually wore two different numbers in his 10 seasons in Ottawa. However, the 3rd overall draft pick wore the #14 the longest as he wore it for 7 seasons, playing in 518 games and finishing with 281 points.

50 in 07. Sorry Zack Smith, I know you were a fan favourite and all but Dany Heatley owns this number. Playing for the Sens for 4 seasons, he had two back to back 50 goal seasons, and was part of the Stanley Cup Final run. Out of the 4 seasons he only missed 11 games, playing a total of 317 games and finishing with 362 points. An absolute mad lad of a player who owns number 15 forever.

The player who has worn this number the longest and probably still could have been wearing this number if it wasn’t for a certain player is Clarke MacArthur. MacArthur played in Ottawa for 4 seasons and is still under contract (this is his last year) despite being unofficially retired. Clarke MacArthur suffered a series of concussions with the 2016 concussion (due to Sieloff hit) knocking him out for all but the last 4 games of the 2016-17 season. He would then go on to score the series-winning goal against the Boston Bruins in a game Sens fans won’t forget for a while. Sadly, the next season, MacArthur failed his physical and has not played a game since, ending his time in Ottawa with 149 regular-season games played and 91 points.

Do you remember Filip Kuba? Kuba played for the Sens for 4 seasons, playing in 261 games and racking up 116 points. Kuba was a solid defenceman but there’s not much to talk about him.

Marian Hossa joins Zdeno Chara on the list of “players Sens’ fans can’t believe got away”. The first-round draft pick played in Ottawa for 7 seasons before moving on to winning Stanley Cups with other teams. The Slovak’s 467 games played and 390 points are much appreciated by Sens fans, and whenever Hossa is in town, he is always greeted with appreciation and hospitality.

One of my personal favourite players, Jason Spezza holds this number. This 2nd overall draft pick played 111 games for the Sens before switching over to #19 where he played 9 seasons, 575 games and earned 611 points as #19. He was also part of the most dominant line in Ottawa Senators history: The Pizza Line. Despite playing for the Toronto Maple Leafs, Spezza still holds a special place in Sens fans’ hearts.

While some may argue that Magnus Arvedson should take this spot, the general consensus is that Antoine Vermette is the best player to wear number 20 for the Sens. Vermette was drafted by the Senators in the 2nd round of the 2000 Draft. He would go on to play 359 games in 5 seasons before being traded to the Columbus Bluejackets in 2008. Vermette finished with 167 points in his time in Ottawa.

For #21 we are going back a few years to the 90s. Dennis Vial served the Ottawa Senators for 5 seasons. The defenseman played in 176 games and earned 17 points. Vial led the Senators in penalty minutes, major penalties, and fighting majors and was the Senators all-time penalty minutes leader until Chris Neil took that title.

Chris Kelly, drafted by the Sens in 1999, played 4 games in 2004 before switching to number 22 the next season. He would go on to play 6 more seasons with the Sens before moving over to the Bruins where he would win a Stanley Cup. In the 2016-17 season, Kelly returned to the Senators for one last season. In total, Kelly played 7 seasons as #22, playing in 541 games and racking up 188 points.

Only 2 players have worn the number 23 for more than 2 seasons and these players are Karel Rachunek and Kaspars Daugavins. However as Rachunek played the longest between the two, he will take the spot for #23. Rachunek, a 9th round pick by the Sens in 1997, played in Ottawa for 5 seasons, wearing the number 23 for 4 of them. He played a total of 240 games and finished with 97 points.

Somehow, Ottawa was able to keep this Russian for a pretty long time. Which is pretty surprising when you look at who the owner is. Anton Volchenkov takes the number 24 slot very easily. Drafted 21st overall by Ottawa in the 2000 draft, Volchenkov would go on to play 7 seasons for Ottawa, playing in 428 games and racking up 94 points. What really stood out to me was the fact that he only had one season in Binghamton in the 2004-05 season where he played in 69 games and finished with 45 points.

If there was a fight needed to flip momentum or a teammate that was in need of backup, or even times a clutch goal, Chris Neil was your guy. Neil was drafted in the 6th round by Ottawa in the 1998 draft and would then go on to play 15, yes 15 seasons in Ottawa, with only one season spent in the AHL. Neil played a total of 1026 games, finishing with 250 points. Now, when we think of Neil, we don’t think about his points, we think about his penalty minutes. Sens fans will be happy to hear that Neil finished with 2522 PIM, which is the most in Senators franchise history.

And with Neil, this wraps up this week’s article of “Senators numbers through the years”. Tune in next week for numbers 26-50. Who was your favourite Sens player on this list or not on this list? Let us know in the comments or on our Twitter and Facebook

One thought on “Senators numbers through the years”