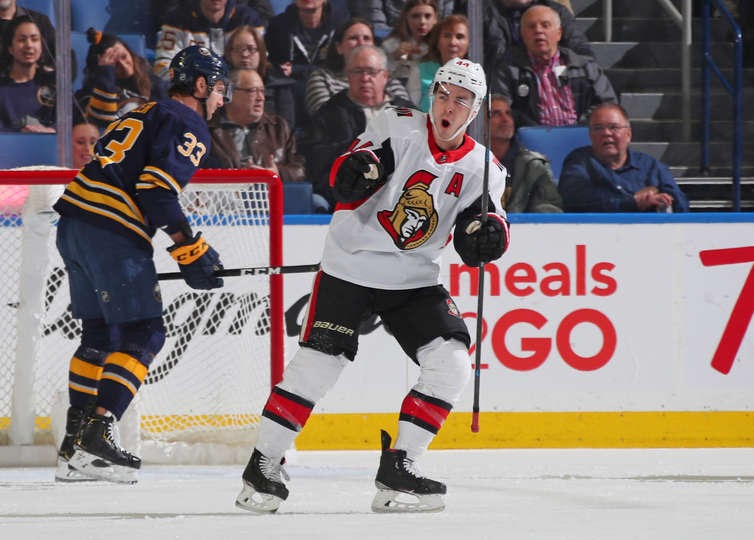 February has arrived, meaning that the all star break and the Sens’ bye week have passed. This means that one lucky person (me) has the chance to review the season so far. At the time of writing this article, Ottawa currently sits 28th out of 31 teams. However, we are 3 points above 30th. 31st will never be attainable as Detroit is having a season so bad, that they might not even reach 20 wins.

In all honesty as a Sens fan, this season hasn’t been that bad at all. Perhaps it is because we know we are actively tanking AND that we have San Jose’s pick. They also happen to be only 2 points ahead of the Sens. Maybe it’s the fact that every game is a win-win situation for us. If we win, we are happy because we got to see a win. On the other hand, if we lose we’ll we get one step closer to 1st overall pick. Overall, this season is the perfect season to analyze the players and see who should stick around.

Despite being a somewhat meaningless season, there have been quite a few talking points. The first one is the goalie situation. Ottawa currently has 3 NHL Caliber goalies in Anderson, Hogberg, and Nilsson. Nilsson has been out injured for a while so Anderson and Hogberg have had their playing time. However, once Nilsson comes back, Ottawa will have to make a decision on which goalie to get rid of. None of these goalies will be going back to the AHL, so the best decision they can make is trade one of them at the trade deadline for additional picks. Personally, I think Anderson’s time is up and he should be the one traded at the deadline.

The second talking point is the play of the new players. Anthony Duclair alongside Connor Brown and Tyler Ennis have been phenomenal. These four and Pageau are the Sens’ point leaders and are making Dorion look like a genius. Duclair has been the talk of the show, as he has revitalized his career. It seems that finally, he has found a team where he can perform with little pressure and it’s paying off with his 21 goals so far this season. It also appears that Duclair wants to stay in Ottawa:

It’s not only these new players that are performing. Pageau is currently sitting on 20 goals this season and has looked as good (if not better) as he did during the Rangers series in 2017. Mark Borowiecki currently has SEVEN yes 7 goals this season which is better than

Ottawa’s Mark Borowiecki just scored his 7th goal of the season, putting him ahead of these defencemen (among others):

Brady Tkachuk has been solid with 14 goals and more importantly pissing off the entire league with his shenanigans. As one can see, the Sens have a lot of players who are performing and who can help a team in the playoffs. So the question is, who do they trade at the deadline?

Who do the Senators trade?

The Sens are in an interesting situation. They are tanking which usually means that come Trade Deadline they will be sellers looking for some extra picks. However, this year they have not one, but two first-round picks thanks to San Jose. So the Sens don’t need to DESPERATELY sell this deadline and in all honesty, I’d like to see them keep most of their players. However, before I give my list of players to trade here’s who some fans want to trade.

Looking at this small sample its clear a lot of fans are on the same page. Anisimov, Anderson, Hainsey, and Tierney are all players who can get some picks back at the deadline. I would really focus on Anderson and Hainsey as these are the players that will really pick up value for the deadline. However, Anisimov alone I doubt will bring anything big back. As for Tierney, I am on the fence on whether to trade him or not. Currently, he is the Sens’ second-line center and with Colin White struggling I do not think it’s the right time to trade him. If anything, I’d try to trade Namestikov.What people need to realize is that Ottawa is nearing the end of its rebuild. We don’t need to ship out everyone. People hoping to trade Pageau or Duclair need to understand that these are players that will help once this rebuild ends. Why trade away players who are having incredible seasons, especially when the team already has San Jose’s pick. This year, the Sens have the resources to keep their star players while getting rid of some playoff players such as Anderson and Hainsey who will for sure pick up some good returns. I trust Dorion and I won’t be surprised if Ottawa isn’t as active as everyone thinks they will be this trade deadline.

For the rest of the season, Ottawa has to secure bottom 3. Everything comes down to chance at the end of the day. However, if they are able to secure at least 4th, they need to take that, especially in this deep draft. As mentioned before, Ottawa won’t be able to catch Detroit but it’s important that they lose enough games (while winning a couple here and there for the morale) to secure that lottery pick. As Sens’ fans, we should also be cheering on the Shark Tank. The lower the Sharks finish, the better chance of a top 3 pick for the Sens.

Sens fans let’s continue taking advantage of this win-win season and let’s keep on cheering on the kids and cheering on the future. Don’t worry, the rebuild is almost over, we just need to secure that top pick now.