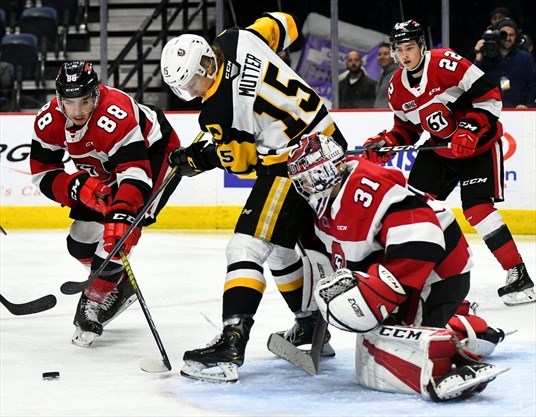 Another interesting week is in the books for the Ottawa 67’s, and despite the winning ways recently, the 67’s are still looking to get better it seems. The 67’s are still battling with the Peterborough Petes for the top spot in the Eastern conference, and adding more pieces could be the next step in overtaking the them. Lets get to the week 12 review!

@Gatineau: The 67’s and Olympiques rekindled a rivalry that had been dead for many years just a few years ago. I would make the argument that the 67’s most hated rival is now the Gatineau Olympiques. In the first period of the game, Cedrick Andree was forced to put on a show. He saved the 67’s multiple times allowing them to get to the intermission tied at 0. Without him in the first period who knows how the game would have looked, but my guess is the 67’s would have been down 3 or 4 goals. The intermission clearly gave the 67’s a new life however. Just 40 seconds into the second period Noel Hoefenmayer would blast his 11th of the season past Creed Jones to give the 67’s a 1-0 lead. Less than 10 minutes later the 67’s power play would go to work. Joe Garreffa would finish off the broken play with 2 seconds left on the man advantage to increase the 67’s lead to 2-0. Garreffa wasn’t done there however. Garreffa would bury the empty netter at the end of the 3rd period for his second goal on the night, but more importantly to give the 67’s a 3-0 lead. It was at this point that the teddy bears came flying out of the stands in Gatineau. It’s not often you see the bears fly for the visiting team, but Gatineau would be shutout while the 67’s would add one more to take a 4-0 win, and take game one of the Alexandra Cup. Special shout out to the 67’s fans who were at the game making noise and cheering on the boys. I predicted a 67’s win this game and they did obviously, my record for predictions this season is 21-6

Community Practice: The 67’s were once again on the practice ice with local kids on Saturday, and when things like this happen I want to make an effort to talk about it. The 67’s practiced with both the Ottawa Girls Hockey Association and the Ottawa Bandits, a special needs hockey team.

I talked about why I thought this was so awesome the last time the 67’s did one of these practices so I wont do it again, but seeing the boys in the community making a different so special for me.

Vs. Gatineau: This game was interesting to say the very least. Many things happened. The game began with a Gatineau goal, and I think I’m ready to change what I have been saying for weeks. The 67’s get scored on first all the time, but its beginning to feel like it only happens when the team is playing at home. Never the less, it was 1-0 Olympiques. That would only be the second most notable thing to happen in the first period as a hole in the ice would end the period about 3 minutes early. Before I go any further, props to Creed Jones for playing incredible. Here’s one of the best saves you will ever see.

The 67’s took a while to solve Creed Jones, but Mitch Hoelscher found a way at the end of the second period with this beauty of a goal. The patience Hoelscher shows on this goal is really impressive. On top of all that, the goal was scored short handed. Gotta love those! This was also point number 100 for Hoelscher in the OHL. Congrats Mitch!

Once the referees finally started calling penatlies against Gatineau, they quickly found themselves down 2 men. Putting Ottawa on a 5 on 3 is dangerous. They can hurt you so many ways on just a 5 on 4 and it feels like there is no way to stop them on a 5 on 3. That was the case this time as Noel Hoefenmayer hammered his 12th of the season by Creed Jones to give the 67’s a lead they would not relinquish. Again, Gatineau took another penalty letting the 67’s power play get back to work. Who would have guessed it, Austen Keating made it 3-1 when he tapped the puck into the wide open net. The 67’s would add 2 more goals and win the game 5-1. For the second year in a row the Ottawa 67’s are Alexandra Cup Champions! This trophy doesn’t mean a whole lot right now as there are bigger goals in mind for the 67’s, but winning something is always better when it means your rivals don’t win. I picked the 67’s to win this game improving my record to 22-6

Trade Rumours: The Ottawa 67’s are being linked to Hamilton Bulldogs forward Navrin Mutter. Mutter has only 9 points in 28 games and is currently -9 on the year.

Mutter isn’t much of a goal scorer or a point getter, but one thing Navrin Mutter would add to the 67’s is some toughness. When I first heard about this rumour, I was against it, but the more I have been thinking about it and looking back to the Guelph series last season I’ve come to the conclusion that this is something the 67’s need to do. The price needs to be reasonable, but I think this is a trade worth seriously considering.

Here’s a look at the standings after week 12.

The 67’s may be in 3rd in the East right now, but they have the highest points percentage of any team in the OHL this season. If that continues to be true they will not be in 3rd by the end of the season.

Vs. Barrie: The Ottawa 67’s face off against two middle of the pack teams this weekend, and the Barrie Colts come to town on Saturday to kick things off. The Colts just above .500 but have some solid players on the team. Tyson Foerster has 37 points in 26 games, but that’s about the only player that strikes fear into me. The Colts currently sit 6th in the East, but they aren’t one of the worst teams currently in the top 8. They will probably finish in 4th or 5th in the conference if I had to guess right now, but you just never know. The 67’s need to come out and play. They can’t expect the Colts to roll over and die. I don’t have too many worries about this game, and the 67’s should win this one. I’m going to take the 67’s by a score of 3-1.

Vs. Niagara: The 67’s have already played the Ice Dogs this season, and they managed to win that game. Since then, the two teams have headed in opposite directions with the 67’s becoming one of the best teams in the OHL, and the Ice Dogs falling flat on their faces. The Ice Dogs are below .500 as of right now, and I don’t really expect them to be much of an issue for the 67’s on Sunday. If you are headed to the game, be sure to bring a teddy bear as Sunday will be the annual teddy bear toss game! Since I’m all about making predictions, I’m going to predict that Teddy Sawyer is going to score the teddy bear goal. I’m making this pick partly because I think it will happen, and partly because his name is Teddy. Akil Thomas and Phillip Thomasino are the only players on the Ice Dogs that worry me, and even then the 67’s have the ability to shut those players down. I’m taking the 67’s by a score of 5-0 in this game.

As for the the battle for first in the East, the Petes will see the Hamilton Bulldogs, the Oshawa Generals, and the Niagara Ice Dogs this weekend. No matter the outcome, the 67’s will have 3 games in hand over the Petes after the weekend, but we can only hope that the Petes lose one of these games and the 67’s win out this weekend. The race is close, but these games in hand are going to need to be made up at some point.