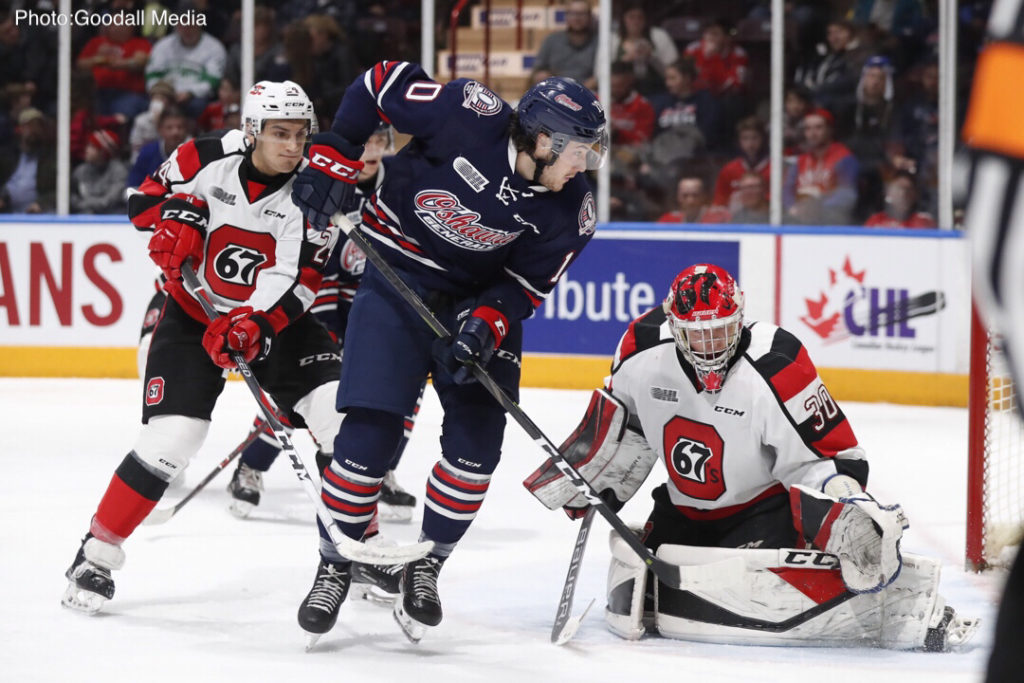 It was a good week on the ice for the Ottawa 67’s, but for the OHL family off the ice, it was a sad and terrifying weekend. Let’s get to the review!

Vs. Barrie: The struggling Barrie Colts came to town on Saturday. The game started the same way every other home game does, with the Colts scoring first. This time, they scored on a 5 on 3 man advantage after two bad penalties by the 67’s. In the middle of the first period, Yanic Crete would find himself in the right place at the right time and stole the puck from Colts goaltender Arturs Silovs, and put the puck into the empty net to tie the game at 1. On the power play, the 67’s would score on a broken play to take a 2-1 lead. The Colts would promptly answer back on a shorthanded goal that Cedrick Andree needs to stop. Either way, the 67’s and Colts went to the intermission tied at 2. The 67’s would score a power play goal with just under 8 minutes remaining in the second period. That goal would be followed up by quick goals from Austen Keating and Jack Quinn. Ottawa would score 2 more goals in the third period and win the game 7-2. I picked the 67’s to win this game, and my predictions record is now 23-6.

Some notes from this game from me:

Vs. Niagara: Please note, this game has been postponed and will be played on Tuesday March 10th. For those of you who didn’t hear, IceDogs goalie Tucker Tynan was badly cut by a skate in their game against the London Knights. Tucker is now recovering, and everyone at 613 Sports wishes him all the best during his recovery. Credit to the OHL for allowing the Niagara IceDogs the time to heal mentally before they play another game.

Here is a look at the week 13 standings

As you may have notice, the Ottawa 67’s now have 3 games in hand over the Petes. The Petes are at home to Oshawa tonight.

@Oshawa: The 67’s only have 1 game this week, and it’s in Oshawa. This game is going to be an easy one to overlook. The Christmas break in on the minds of everyone at this point, and it wouldn’t totally surprise me if the 67’s took the night off. After the hot start, the Generals are now 10 points behind the 67’s and need to start getting hot. The Hamilton Bulldogs are nipping at the heels of the Generals and Oshawa seriously needs to get on a roll. The 67’s have won 10 straight games and are in a good spot to have a chance to win the East as we sit right now. I have a feeling that the 67’s are going to take this game off and the Gens will come out firing. I picked Oshawa last time these two team met, but I just don’t like this game for some reason. Generals will take this one 6-2.

A short one this week and it will only be shorter next week. Take this time to enjoy your family and friends! Happy holidays from everyone at 613 Sports!