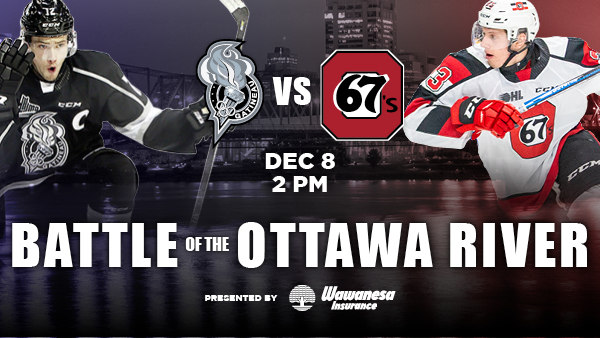 If you thought the 67’s were going to slow down over the weekend you were wrong. After a huge weekend, the inter-league series between the OHL’s Ottawa 67’s and the QMJHL’s Gatineau Olympiques promises to be a heated battle as the two squads look to take home the second annual Alexandra Cup.

@Kingston: Going into this game, I expected the 67’s to score a lot of goals and win by a large margin. They did that. The problem is that Kingston also scored plenty of goals. There were so many goals that I refuse to write about this game the same way I do for others and instead I’m going to show you the highlights.

Six members of the 67’s scored multiple points on the night, Noel Hoefenmayer (4), Austen Keating (7), Jack Beck (2), Yanic Crete (2), Marco Rossi (6), and Joe Garreffa (4). Despite scoring 11 goals, the 67’s can’t be entirely pleased with the defensive effort on Wednesday night after allowing 6 goals to the Fronts. The good news is the defensive effort didn’t hurt Ottawa on this particular night, and even better news is I predicted the 67’s to win. My predictions record is now 19-5.

Vs. Oshawa: The Generals came to town Saturday afternoon, and while I worried that Aaron Neely was back officiating a game between these two, Serron Noel was being scratched. The Generals haven’t been playing great hockey as of late, and this would be a big game for the 67’s to keep them in 4th in the East. This game started the same as so many others… with the opposition scoring the first goal of the game. You know the drill by now, don’t panic, the 67’s just like to give the opponent a handicap before they start playing. Allan McShane would roof one over the glove of Cedrick Andree to give the Generals a 1-0 lead. Late in the period, the 67’s big line would go to work. Marco Rossi found the back of the net after a drop pass from Joseph Garreffa to tie the game at 1 at the intermission. The 67’s would score the only goal of the second period when Noel Hoefenmayer scored an unassisted goal on a shot from the point. Noel Hoefenmayer wouldn’t be done there, and he was oh so close to a franchise record.

Midway through the third period the Generals thought they had scored when Cedrick Andree played the puck across the front of the net, something he should never do, but the referees ruled it goalie interference, and the game remained 3-1. The Generals were poised to make a comeback however, and that would begin with a Brett Neumann goal to make it 3-2. Seconds later, Brett Harrison would score a goal that Andree would stop 99.9% of the time, but not this time, and the game was tied at 3. Overtime again everyone in the building thought. Not so fast

Vs. North Bay: This game was never really in question for the 67’s, and it shouldn’t have been either. The 67’s would score the first 3 goals of the game with Marco Rossi and Austen Keating getting the goals. The Battalion would answer back and find the back of the net in the second period, but that would be the last goal they scored. The 67’s regained control of the game and scored the next three goals (Crete, Garreffa, Belanger) and would win the game 6-1. I picked the 67’s in this game, and that improves my record to 20-6.

The 67’s did manage to score 10 goals in a game, it just wasn’t in the game I thought it would be. That should be worth something… right?

Since this is a different type of weekend for the 67’s, I’m going to change up the format a little bit. The 67’s play Gatineau twice so I will only do one preview

Gatineau: The 67’s and the Olympiques rekindled a heated rivalry a few years ago when they played an outdoor game at TD Place, and since then there has been a trophy created for the winner of the games. The Alexandra Cup was created last season for the games, and the 67’s won the trophy on aggregate. Here’s a look at the trophy.

Obviously for the 67’s, this is only the first trophy they hope to take home this season. There are much bigger aspirations for this Ottawa squad, but there is always something to be said about beating your rivals.

The 67’s only meet Gatineau twice per season, and they will be playing those two games over the weekend. Friday night in Gatineau, and Sunday afternoon at TD Place in Ottawa. You don’t always know what to expect in these games, but here’s what we know about Gatineau. The Olympiques are 7-17-3 at the time of writing this and are the second worse team in the QMJHL. Gatineau has only one player averaging at least a point per game, and that is Charles-Antoine Roy. In comparison, the Ottawa 67’s have six players averaging a point per game. Those players are Marco Rossi, Austen Keating, Noel Hoefenmayer, Joseph Garreffa, Jack Quinn, and Mitch Hoelscher. You can also add Graeme Clarke to that list, but he has only played 9 games.

These two games should be wins for Ottawa, but I am always concerned about playing a team from a far more physical league. The QMJHL produces many talented hockey players, but they are all tough. These are not like the average OHL game. These games will be physical, and the young players for the 67’s will need to be ready. Another thing that could hurt the 67’s is penalties. The 67’s need to stay out of the penalty box in order to give themselves the best chance possible.

Overall, the 67’s are the better hockey team on paper, but that was also true last season and Gatineau took the first game of the series. As for my predictions, I think the 67’s are going to win both the games this season. In the first game in Gatineau, I’m taking the 67’s by a score of 7-3, and for the second game in Ottawa, I think it is going to be much closer, but I have the 67’s in overtime by a score of 6-5.

An important thing to note about this series is that the game do count towards the standing for each team in their respective leagues. It is important for the 67’s to take advantage of a weaker opponent that no one else in the league will be playing and put 4 points in the bank while doing so.

Not to be lost in all of this is what the Petes are doing. As far as they go right now, their weekend starts with the Knights coming to town. That game is followed by a home and home with the Kingston Frontenacs. The 67’s need to win both of their games to keep pace because the Petes keep winning, and that’s sure to continue with the Fronts coming up twice.

As always, be sure to follow me on Twitter @Frankie_Video, and be sure to vote in the poll below. If the poll is closed when you read this, don’t worry! Tweet @613_sports with how you think we could improve going into 2020!