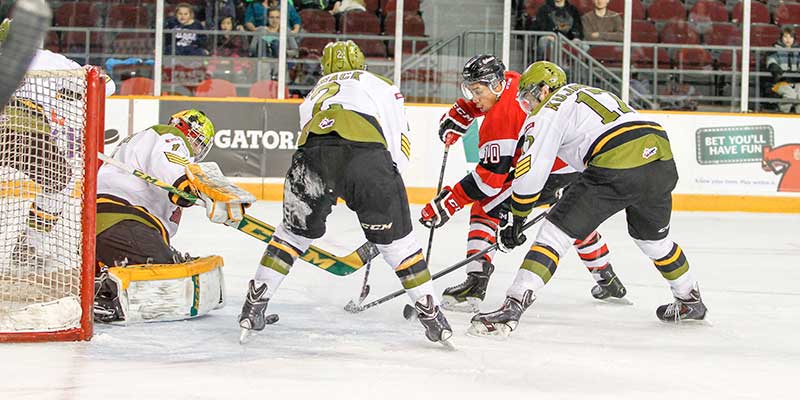 Yet another good weekend for the 67’s. The Ottawa 67’s continue to play the best hockey in Ottawa and continue their battle for first in the Eastern conference.

Vs. Sudbury: The Wolves made their first trip to Ottawa of the season for the 67’s annual school day game. As you can imagine, the kids were loud and on the 67’s side for the most part. In the upper levels, there was a Yanic Crete supporters section wearing nothing but Crete jerseys. It’s always cool to see how much fun the kids have at these games even if they destroy my hearing! The time of puck drop may have been different but one thing didn’t change, and that was the 67’s getting scored on first. The Wolves would score off a Chase Stillman deflection and take a 1-0 lead. Stillman wouldn’t be done there however. Stillman finished a beautiful pass from Macauley Carson to give the Wolves a 2-0 lead. With about 4 minutes remaining in the 1st period, ex 67 Peter Stratis hauled down the newest member of the 67’s, Adam Varga from behind. Varga was awarded a penalty shot, but he couldn’t beat Christian Purboo and the game remained 2-0. Just over a minute later, Jack Quinn stole the puck from Kalle Loponen and put the puck behind Purboo to cut the Wolves lead to 1 at the end of the first period. Shane Bulitka would restore the 2 goal lead for the Wolves mid way through the second period with a power play goal set up by none other than Quinton Byfield. From this point on it was all 67’s. The 67’s got goals from Jack Quinn (again), Kevin Bahl, Marco Rossi, Yanic Crete sending his fan club into a frenzy, and one last goal from Mitch Hoelscher. The 67’s would take this one by a final score of 6-3, and while it wasn’t as high scoring as I anticipated, I still picked the 67’s to win the game. My record improves to 17-5.

Vs. Mississauga: This is going to be short and sweet. There were not many goals scored, but this was a goal-tending battle. Hats off to both Will Cranley and Kai Edmonds for fantastic performances. Cranley was the better goalie on the day earning his first career shutout at the OHL level. For the 67’s, the only goal with a goalie in the Steelheads net came in the first period when Marco Rossi finished off a cross crease pass from Joe Garreffa. Jack Quinn would add an empty netter at the end of the game to give the 67’s a 2-0 win. My record improves to 18-5 as I picked the 67’s.

Here is a look at the standings after week 10

@Kingston: The 67’s travel to Kingston again on Wednesday. The last time these two teams met the game ended 8-7 in overtime in favour of the Ottawa 67’s. The Fronts are riding a 4 game win streak and can’t be taken lightly. The 67’s are looking to continue this battle for first in the East and are one of the better teams in the OHL. Kingston will need a full effort and a big game from whoever they decide to put between the pipes to beat a loaded 67’s squad. The first two times these teams have met the game has gone to overtime. Look for the 67’s to put their foot on the gas and not stop the entire game looking to avoid going back to overtime against a team that they should beat easily. For me, I think this is a no brainer. The 67’s are going to be looking for redemption in a sense, and they are the far better team. I think the 67’s win this one in a blow out by a score of 7-1.

Vs. Oshawa: The Generals are back in town Saturday afternoon and wouldn’t the 67’s love to have that extra point or two they were cheated out of last time right about now. At this point everyone knows what the Generals are and just how good they are. They have been struggling a bit as of late, and they look to change that and climb back into first place with a win against the 67’s. The 67’s are going to need to play a good game to beat the Gens, and the Gens are going to need to play a good game to beat the 67’s. These two teams make for an interesting match up every time they play one another, and if you are thinking about going to this game I encourage it. This is going to be a great hockey game, but I unfortunately think the Generals are going to take this game by a score of 4-3 in overtime. The Gens are going to be a hungry bunch, and while the 67’s have all the talent in the world to keep up with them, I feel like the Generals want to win this game more than the 67’s do.

Vs. North Bay: The 67’s will get their first look at the league worst North Bay Battalion. The Battalion only have 10 points on the season and should be easy picking for the 67’s on this coming Sunday, but you play the games for a reason. The Battalion have given up 130 goals this season. The next highest total is 108 by the Hamilton Bulldogs (Ottawa has allowed 65, lowest in the OHL). The Battalion have only scored 71 goals, good for 4th last in the OHL. Ottawa has scored 94. This combination tells me one thing. This game is going to be an absolute blow out. I know I predicted a 7-1 blow out for the Kingston game, but I’m predicting worse. I think this might be the game the 67’s reach the 10 goal mark. I’m picking the 67’s to beat the North Bay Battalion by a score of 10-0. That’s right, 10-0. It’s not often I’m going to do this, in fact, I may never do it again this season, but something about this game just smells like a 10-0 blow out.

This weekend is a mixed bag of good, bad, and terrible team. The 67’s need to take advantage of this weekend and gain some points in the standings. They have been doing their job, but they need some help at some point.