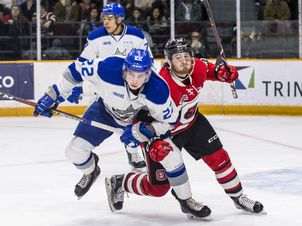 The Ottawa 67’s had yet another road trip over the weekend after making another trade on the prior Wednesday. Every weekend can be considered important at this point in the season, and this one was no different. The 67’s are still chasing the Petes and the Generals, and Ottawa needs to continue to play their brand of hockey.

Adam Varga: Last Wednesday, the 67’s pulled the trigger on a trade that would net them forward, Adam Varga. Varga was born in Bel Air, MD in 2001 and is in his 3rd year in the OHL. At the time of the trade, Varga only had 1 point. In his time playing Bantam hockey, he put up some decent numbers and it may just be a matter of time before that translates to his OHL game. The 67’s sent a 2020 6th round pick to the Steelheads in the exchange.

@Saginaw: The 67’s weekend began on Thursday night in Saginaw, marking the only trip to Saginaw this season. After the puck dropped, wouldn’t you know it, the Spirit would strike first. Camaryn Baber tipped a point shot past Cedrick Andree to give the Spirit a 1-0 lead. It wouldn’t take long for the 67’s to respond however, and it would be Marco Rossi teaming up with Joe Garreffa on the power play to tie the game at 1. Just over 5 minutes later, Mitch Hoelscher stripped T-Bone Codd at the Ottawa blue line and out-waited Tristan Lennox beating him five-hole to make the game 2-1 for Ottawa. Late in the 1st period, Alec Belanger turned the puck over and Jake Goldowski would make no mistake, tying the game at 2 going into the intermission. Flash forward to 5 minutes left in the second period. Mitch Hoelscher would strike again on a one timer and give the 67’s a 3-2 lead. That would be the last goal the 67’s would score in the game. With 5 minutes left in the 3rd, the Spirit would score a short-handed goal, and you just got the feeling this wouldn’t end the way the 67’s wanted. In the dying minutes of the game, Cole Perfetti scored to give the Spirit a 4-3 lead, a lead they would not relinquish. I picked the Spirit to win in overtime. It didn’t go to overtime, but I got the winner right, so my record improves to 14-5.

@Flint: The 67’s make their only trip to Flint who have been playing some good hockey as of late. The Firebirds have been winning when playing on home ice as well, and it was going to be tough for the 67’s to leave Flint with a ‘W’. The first goal of the game wouldn’t come until Joe Garreffa scored with 13 seconds left in the first period and man oh man was it ever a beautiful goal. The Firebirds would score the only goal of the second period when Evgeniy Oksentyuk poked in a cross crease pass from Dennis Busby. The flood gates would open in the 3rd period and Kevin Bahl (who is really agile for a giant) would score the first goal of the period. Noel Hoefenmayer wanted to show Kevin Bahl that he is the most agile defenceman on the team so he pulled off a between the legs pass to Garreffa, who would score to give the 67’s a 3-1 lead. Flint would answer back midway through the 3rd, but that would be as close as the got. And, oh ya! Joe Garreffa scored one more time to give himself a hat-trick. I picked the 67’s to win this game improving my record to 15-5 through 20 games. That sounds good the me!

@Sarnia: You get the drill by now. The 67’s make their only trip to Sarnia of the season. The last time these two met, the 67’s dominated, and this game was much the same. I’m honestly getting tired of writing the name ‘Joe Garreffa’ but he keeps scoring. He would open the scoring yet again. I’m also getting tired to writing Mitch Hoelscher, but he scored in this game too. Before the game really even started, the 67’s were leading 2-0. The sting would answer back on the power play however, and it would be Sean Josling from the point. Less than a minute later, Marco Rossi would score to regain the 2 goal lead for the 67’s. Early in the seconds, the best line in the OHL was at it again. Joe Garreffa scored with assists from Marco Rossi and Austen Keating. Jacob Perrrault would score back to back power play goals for the Sting to cut the 67’s lead to 1, but that was as close as the Sting would get. Marco Rossi would add one more before the end of the second period, and Adam Varga would score his first as a 67 in the third period to seal a 6-3 win for Ottawa. I picked the 67’s to win improving my record to 16-5.

Here’s a look at the standings after week 9:

Vs. Sudbury: The Wolves come to town on Thursday and it might end up being the highest scoring game we see at TD Place this season. Yes, I know the 8-7 game against Kingston happened, but here’s what happened in the Wolves last game

The Wolves are currently 2nd in the East, but have been struggling away from home. Their goal-tending is suspect and with the fire power the 67’s have, the kids in attendance might have a lot to celebrate. It won’t be an easy game as the Wolves have fire power too with Quinton Byfield who already has 44 points. I’m expecting the 67’s to win this game and put on a show for the kids in attendance. I’m going to take the 67’s by a score of 9-5.

Vs. Mississauga: The Steelheads come to town once again, and the while 67’s have been getting better and better, the Steelheads have not. The 67’s should win this game rather easily and should be fired up to play on Sportsnet. The 67’s beat the Steealheads 6-1 earlier this season, and that score line reflects the talent difference between these teams. The 67’s are the better team, and they will win this game 6-2. I think this is going to be a high scoring weekend for the 67’s, and a weekend like that could be huge for this race with the Petes and Generals as we head towards the Christmas break.