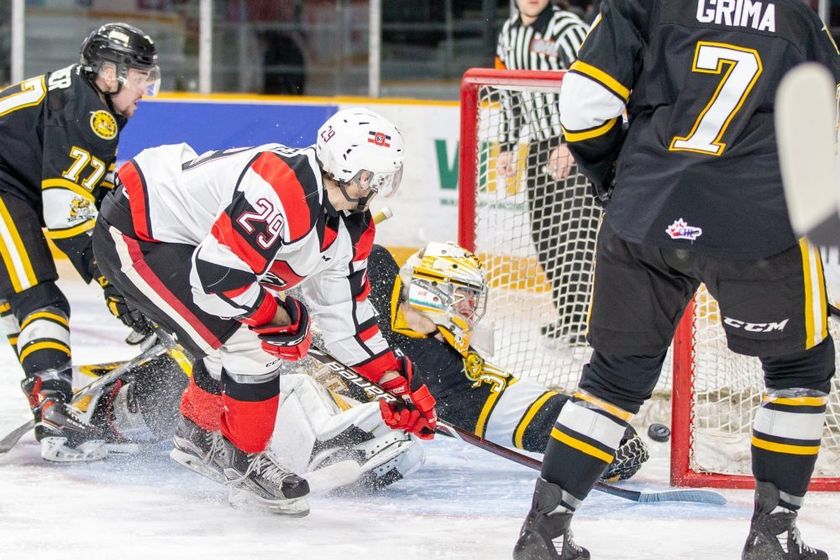 In a crucial weekend for the 67’s and the Eastern conference standings, the 67’s had a chance at 2 additional points stolen from them by the officiating crew. I myself am a minor hockey referee and I understand how difficult things can be sometimes, but there is simply no excuse for the call that was missed.

Vs. Oshawa: This was the biggest game of the 67’s season thus far, and it felt that way. The game felt like a playoff game and there was a good crowd at the game (Toonie beer night seems to have that effect). The 67’s would open the scoring in the 1st period shockingly when Alec Belanger wristed one past Zach Paputsakis giving the 67’s a 1-0 lead. The lead would last for just under 10 minutes and would end when Brett Neumann beat Cedrick Andree five hole to tie the game at 1. Early in the second period, the Generals would capitalize on a big break when the puck bounced right to Serron Noel making the game 2-1 Oshawa. After the 67’s got some unlucky bounces in the 3rd period, they finally got some luck to go their way. Paputsakis found himself out of position for the rebound, and Austen Keating didn’t hesitate to make the game 2-2. Now to the controversy. Conveniently, the trip is not shown on the highlights. Just seconds before Brett Neumann scored his second goal of the game to make it 3-2, he tripped Noel Hoefenmayer. With 46.1 seconds left on the clock, the referees missed an obvious call that directly led to the game winning goal. I’m not going to sit here and say the 67’s would have won the game, because we don’t know that. What I do know is the call costed the 67’s a chance at 2 points. For a game like this, that call simply can’t be missed. I picked the 67’s to win this game, dropping my record to 12-5.

Practice with KMHA: On Saturday, the 67’s practiced with kids from the Kanata Minor Hockey Association.

Not only did the boys practice with the kids, they also signed some autographs for them after the practice. When I was younger and playing for the Blazers, things like this were always very special. Those moments and others like it made me a 67’s fan for life. For those kids that were on the ice Saturday, this is something they will always remember. Its good to see the boys taking time out of their lives to be in the community. This may seem like a small deed for the players and coaches, but it can certainly have a much bigger impact! Way to go boys, the community is proud of you!

@Peterborough: The 67’s traveled to Peterborough knowing they needs to win to keep pace with the big dogs in the Generals and the Petes. This would be the 3rd time these two teams have met, and the Petes got the best of the 67’s in the first two meetings. The first goal of this game wouldn’t come until the second period, and it would be Cameron Butler exactly 2 minutes into the frame. The Petes weren’t done there though, and they would grow the lead to 2 with a Liam Kirk snipe from the face off dot on the left side of Cedrick Andree. The motto is #NoQuit as we all know, and the 67’s did just that. Joeseph Garreffa continues to prove to be a huge addition to this 67’s team. Garreffa would get both 67’s goals in regulation to send the game to overtime. Jack Quinn would score one of the dirtiest goals you will see this season in overtime, securing the 3-2 win for the 67’s. I picked the 67’s to win, improving my record to 13-5.

Here is a look at the standings after week 8:

@Saginaw: The 67’s head to Saginaw Thursday night to begin what promises to be a difficult weekend for the 67’s. The Spirit currently sit in 3rd place in the Western conference with 24 points. Cole Perfetti and Cole Coskey have been a good team so far, putting up 32 and 26 points respectively. In order for the 67’s to win this game, they will need to come out firing. The Spirit are a good team, and they wont be able to play like they do against weaker opponents. They need to shut down Cole Perfetti. Cedrick Andree will play a crucial role in that, and he needs to play some of his best hockey this weekend. This will be a clash of two of the hottest teams in the OHL (OTT last 10: 8-2, SAG last 10: 7-2-0-1). I think the Spirit get the best of the 67’s in overtime in this game by a final score of 5-4.

@Flint: The Firebirds are first in the West at the time of writing this. They are currently 12-5 with 24 points. It can be misleading because the 67’s are 13-5, but sit 4th in the East. The Firebirds have been great on home ice this season though, boasting a record of 8-1(at the time of writing this) when the games are played at Dort Federal Credit Union Event Center. The Firebirds are beatable, but it will be difficult. I don’t know who will be playing between the pipes for this game, but if I were making the call I would start Andree against Saginaw and Flint, and Cranley in Sarnia. Assuming that’s what they do, I’m picking Ottawa to win this game 3-0 and rain on the parade of the Flint Firebirds.

@Sarnia: For the second time this season, the 67’s and the Sting will meet. In the first meeting, the 67’s absolutely crushed the Sting and it seemed the Sting were never in the game. I expect this game to go about the same. Sarnia has been playing good hockey lately, but the 67’s on paper are just a much better hockey team. As I write this, I’m listening to the Firebirds play the Sting in Flint’s school day game. While the Sting continue to play well, I don’t think they have the horse power to keep up with the talent on the Ottawa side. If the 67’s execute the way the did on October 27th, they should easily win this game. I’ve got the 67’s by a score of 5-1.

Moving on from a difficult weekend in week 8 is going to be a must for the 67’s. They didn’t let a bad call get to them in the game against the Petes, and they bounced back nicely. Moving onto this weekend, they have been given yet another difficult road trip. This should be viewed as an opportunity. Ottawa needs to continue to win, that’s all they can do.

As always, be sure to follow me on Twitter @FrankieVideo. Don’t be shy, feel free to talk to me!