Setting Realistic Expectations for the New QB1, Will Arndt 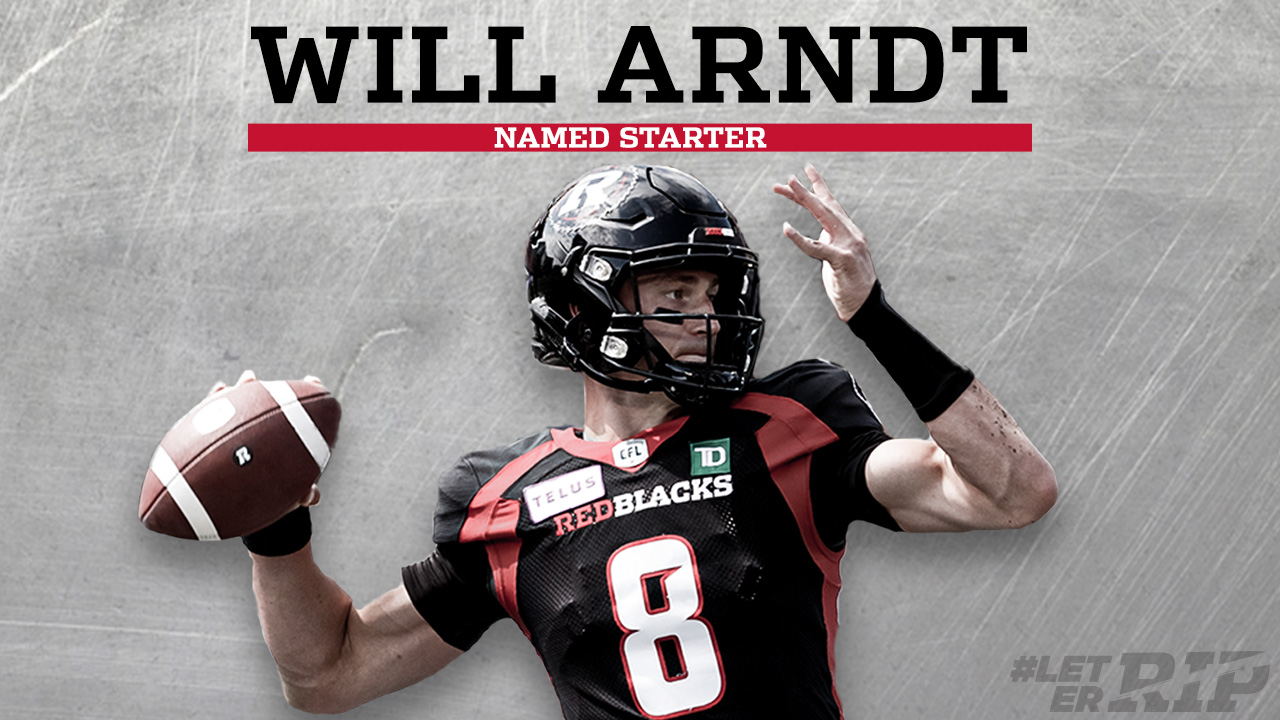 We all knew this was coming. The REDBLACKS have officially named Will Arndt the week 18 starter. Arndt has never started a game in the Canadian Football League, and Friday will mark his first. Understanding that this is going to be a learning curve for the kid is important for the fans. Looking at Arndt’s past, and the supporting cast the REDBLACKS offer, I will set my realistic expectations for Arndt.

Arndt stands at 6’5, 215 LBS. He is 26 years old and played his college ball at Western Connecticut State University. Arndt set WCSU records for most career passing yards (7,940 yards), total offence (9,248 yards), passing touchdowns (73), and total touchdowns (91). Arndt spent the 2016 season playing in the Alberta Football league for the Fort McMurray Monarchs. I was unable to find stats for this season, but according to his Wikipedia page, he won the championship this season. Arndt signed with the REDBLACKS on September 13, 2017, and he stayed on the practice squad until this season. During camp, Arndt began as the 4th string QB, but beat out Danny Collins for the 3rd string spot. Arndt looked good in the pre-season. In the first game against Hamilton, he was 7/16 throwing the ball for 124 yards. In the second game, he was 16/23 for 184 yards, but tossed an interception. In 4 games this season, Arndt has 20 completions on 36 attempts, good for 185 yards. He has also thrown 2 interceptions. Arndt earned his way onto the team this season, and deserves to be here, it’s just a matter of being able to put it all together at a professional level.

What should we expect?

It simply wouldn’t be fair to Will Arndt to set high expectations for him this season. The fact of the matter is that Arndt is going to experience growing pains the rest of the way. In the limited time that we have seen Arndt this season, we have seen that he can make the right decision, but he is still a young QB and is going to make mistakes every now and again.

The one thing that gives me confidence in this kid is what I saw from him as I stood behind the Ottawa bench on the concourse in the home game against the B.C. Lions. When Arndt was put into the game, he seemed to take control of the sideline. He was talking to his receivers, offensive line, and his running backs. Will seems to want to learn everything he can from the people surrounding him, and doing so can improve his chemistry with his teammates. Sometimes, players are unable to become pros, but that isn’t a concern of mine with Arndt.

The offence surrounding the QB can make all the difference. Prime example being the 2014 REDBLACKS, where Henry Burris played alright, but there was no help around him. This season is much the same in Ottawa. The REDBLACKS have 1 receiver above 600 yards this season (Dominique Rhymes). Arndt should be looking to involve Brad Sinopoli for some easy completions to get into rhythm, and hand the rock to Brendan Gillanders to keep the defence on it’s toes.

Stats wise, I would be happy is Arndt could throw for 250 yards and a 1:1 touchdown to interceptions ratio. Like I have been saying all season, improvement should be the goal for the REDBLACKS. My expectation is to see improvement from game to game as chemistry builds and Arndt becomes more comfortable with the level of play in the CFL. All Arndt has to do to make the fans and the management happy is play some competent football. Move the chains, complete passes, avoid interceptions. We haven’t seen that much this season if at all, but 3rd times the charm right?

Arndt needs to be given multiple chances to end the season. He is going to be a project quarter back, and he won’t become a star in one game. This move is the last move you can make, and it was a move that Rick Campbell and the coaching staff waited as long as possible to make. The best thing the REDBLACKS can do is let Arndt finish the season no matter what. Let him get reps with the first team, and use this time as a real try out to see if they have something.

What do you expect out of Arndt the remainder of the season? Let me know @FrankieVideo on Twitter, or on the 613 sports Twitter!