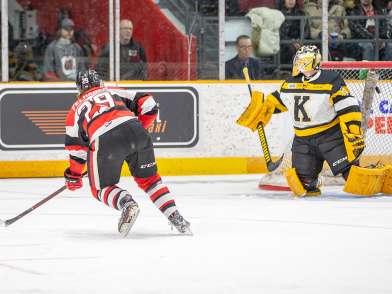 The Ottawa 67’s started off the season on fire, but since the Marco Rossi suspension, the 67’s are 2-3. Ottawa can only hope that getting Rossi back this upcoming weekend will solve the problems, but the issues could be much deeper.

@Windsor: The 3 game weekend trip began against the Windsor Spitfires on Thursday night. Quickly, the Spits found the back of the net first. The 67’s have made it a trend this season to play from behind, and need to clean that up if they want this to be a strong season. The 67’s would respond however, and the response would be a beautiful one. A tic-tac-toe passing play, and the goal scored by Jack Quinn. Graeme Clarke would capitalize on a terrible give away by the Spitfires to take a 2-1 lead on an absolute rocket of a shot. To begin the second period, the 67’s would get a gift of a goal when Brendan Sirizzotti scored his first OHL goal from behind the goal line. The Spitfires would answer less than a minute later on a good shot from Grayson Ladd, beating Andree over the glove side shoulder. At the 11:50 mark of the second period, Jack Quinn would score his second of the game, and this time, it would be a short handed goal to give the 67’s a 4-2 lead. Now we get to the 3rd period. If you watched this game, you know what I’m about to say. The Spitfires tied the game at 4-4 in the 3rd, but that’s not the problem. The 67’s looked completely lost and got out shot 17-2 in the period. In fact, according to the official game centre on the OHL website, they didn’t manage a shot until the end of the period. They were out shot 17-0 before they got a shot on goal. There are problems with this hockey team, but that can’t happen. The players and coaching staff need to use this game as a learning experience and clean up the play. Like normal for the 67’s this season, this game went to overtime. Mitch Hoelscher would be the overtime hero when he scored on another brutal giveaway from the Spits. I predicted a 67’s win, and that would improve my predictions record to 4-1.

@London: Everyone knew going into this game it was going to be a tough one, but I don’t think anyone expected complete domination on the part of the Knights. I’m not even going to bother looking at the goals other than saying London got goals from Josh Nelson, Connor McMichael, and Ryan Merkley, and the 67’s didn’t get goals from anyone. The Knights dominated this game in scoring (3-0), in shots on goal (47-18), and in the face-off department (43-24). The only 67’s who really looked good in this game was Cedrick Andree, who made 44 saves. The 67’s need to learn from this game too, and GM James Boyd should take a good hard look at this one. I predicted a London win in this game, improving my record to 5-1.

@Kitchener: Just like in the Windsor game, the 67’s allowed the Rangers to get on the board first. The response after that goal was all 67’s. In fact, the next 3 goals were Ottawa goals scored by Austen Keating, Jack Quinn, and Mitch Hoelscher. The problems came after that. Those were the only goals the 67’s would score all game. Ottawa shut down again. The 67’s ran into a hot goal tender, and Jacob Ingham stopped 35 of 38 shots, and came up with 18 saves in the 3rd period to secure the win. I’m not as mad about this game as I am the London or Windsor game, because sometimes the guys on the other end are just playing incredible as Ingham was. However, this would have been a nice game to win. I predicted a 67’s win, meaning I am now 5-2.

Vs Mississauga: The 67’s return to TD Place this weekend for 2 games, the first being on Friday night when the Steelheads come to town for the first time this season. The Steelheads are 2-4 on the season so far, and don’t have a pure goal scorer. The 67’s need a big weekend, and I expect them to come out with energy and fired up to play in front of the home crowd again. Keep and eye out for Marco Rossi as he makes his return to the team this weekend. The 67’s are a different group when he is around. I am fully expecting a big game from Rossi, and I am expecting the 67’s to take advantage of a team who will be around the bottom of the standing this season. I’ve got the 67’s winning this game 7-1.

Vs Kingston: The Frontenacs are a bad hockey team again this season sitting with a record of 0-4-1-1 so far. Just like the Steelheads, they don’t have that one guy that will win them a hockey game. Currently, their leading scorer is Shane Wright, with 2 goals and 2 assists through 6 games. Wright was granted exceptional status to play in the OHL this season and should be entertaining to watch on Monday at TD Place. The last time these two teams met was earlier this season in Kingston when Ottawa won in overtime without Marco Rossi and Cedrick Andree. This time, there should be a very different outcome, and the 67’s should win this game by a score of 6-2.

This weekend should’t be difficult for the 67’s considering the opponents. Having said that, if they come out and don’t play 67’s hockey, they will lose these games. After last weekend however, that isn’t a concern to me. If this team want’s to be taken seriously in the OHL, they need to come out guns-a-blazin’ this weekend.

As always, if you want to chat about sports, follow me @FrankieVideo on twitter, and don’t hesitate to reach out to me!