Who Should the REDBLACKS Bring Back on Offence Next Season ? 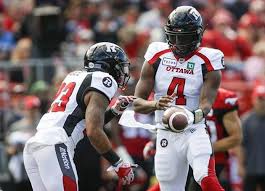 The REDBLACKS season is long lost at this point, sitting in 3rd place in the east division with a record of 3-10. There is no denying the offence has been nothing short of putrid at the best of times this season, scoring a total of just 180 points in 13 games, good for last in the CFL and 39 points behind Toronto, who has only played 12 games. There is serious work needing to be done in the off season and GM Marcel Desjardins will need to bring in some top level players. Despite this, there are players on the team right now who can help the team in the future, and it is going to be important for the team to identify who these players are and keep them around.

I will separate the players who I would bring back into 2 categories, who they need to bring back, and who they could go either way with. I won’t be worried about contracts too much, especially considering players get cut all the time. I will also be including special teams in the offence because they score most of Ottawa’s points anyway.

Who should the REDBLACKS keep?

Nate Behar: I know that we haven’t seen much from Behar this season, but I’m very high on this kid. We have seen glimpses of what he can be on some long receptions this season. Despite only having 12 receptions for 137 yards so far, he plays with heart. Behar could be a very good 3rd or 4th receiver to round out a receiving corps, and hes Canadian to boot. Behar stands the chance to be a good ratio busting receiver if put in the right position.

DeVonte Dedmon: At the very least, Dedmon looks like he could be one of the best kick/punt returners in the CFL, and Ottawa seems to go through kick returners like no other. If Dedmon can limit drops when he gets on the offence, he could become the lethal speed threat that the REDBLACKS so desperately need.

R.J. Harris: Harris is a productive receiver who is averaging 13.9 yards per catch in his 2 years in Ottawa. R.J. has been injured this season and hasn’t seen the same production as last year, but that’s not all his fault. Give R.J. the opportunity to make plays with a good QB and he will continue to get better and better.

Brad Sinopoli: What can you say about Brad that hasn’t been said before? Brad is a solid option who has been under utilized this season, in part due to poor throws and part neglect early in the year. He hasn’t looked like the same Brad Sinopoli this season as we are used to, but I think he is owed at least one more chance.

Richie Leone: Despite being a punter, Leone is very important to the REDBLACKS. He often flips field position and unleashes the booming punt just when they need it the most. You can argue that Leone is the best punter in the CFL, but I would also like to see him less. Sorry Richie.

Lewis Ward: Lewis is a 95% kicker in 2 years with the REDBLACKS. What else do you need to say about Lewis? This one is as obvious as they come.

John Crockett: Crockett has been very good for the REDBLACKS when he has played, but that’s the problem so far. Crockett has been hurt for the majority of the season, but that doesn’t change the fact that hes a good running back. If it was up to me, I would be giving this kid an extension.

Who could the REDBLACKS go either way with?

Dominique Rhymes: There are times where Rhymes looks really good, but there are also times where he leaves me wanting more. He is the kind of player that the I wouldn’t be upset if the REDBLACKS kept, or if they replaced him.

Brendan Gillanders: Why hasn’t Gillanders been given a start yet this season? Is there something the REDBLACKS know that we don’t, or is it that they just don’t think hes good enough? We may never find out, but I wouldn’t be surprised to see him stay, or to see him go.

Stefan Logan: Stef Logan has come into Ottawa and worked hard and played hard the whole time. Logan is a veteran and could help work with some of the younger players, and could mentor Dedmon. Having a veteran in the locker room like Logan would benefit the REDBLACKS.

Will Arndt: The only reason I am putting Arndt here is because we don’t know much about him yet. The REDBLACKS seem to be high on him and he might be getting a start sooner rather than later, so we should have some answers soon.

Dominique Davis: To me, this is dependent on how Arndt preforms. If Arndt looks like he can be the backup QB next season, Davis might be allowed to leave, but if Arndt isn’t ready to be the backup, we could see Davis back next season.

The rest of the OL: Again, I’m not an offensive line expert, but we all know they haven’t been great this season. They haven’t been bad either, and that’s why they are here. Some guys like Fontana and Korte are more likely to stick around than others though. Some of the linemen will be walking at the end of the season for sure, it’s just going to be a matter of who. I wan’t to trim this list down, but I can’t. Truly, I have no idea where the REDBLACKS will go on the offensive line.

Rafael Arujo-Lopes: Arujo-Lopes has only played 1 game for the REDBLACKS this season. The game was in Edmonton and he had 6 receptions for 57 yards, but more importantly, he looked like a dynamic receiver who could benefit to the team in the future.

That’s the offence. Obviously, Marcel Desjardins will not be able to just keep these players around and not bring anyone in. There are big moves to make in the off season, including bringing in a starting QB, a few WR, and some help on the offensive line at the very least. Making some of these moves could build a base for the REDBLACKS and allow them to add some building blocks in the off season.

I will be doing this same kind of thing next week for the defence, so stay tuned for that. If I missed something or you disagree with anything, let me know @FrankieVideo on Twitter.

2 thoughts on “Who Should the REDBLACKS Bring Back on Offence Next Season ?”