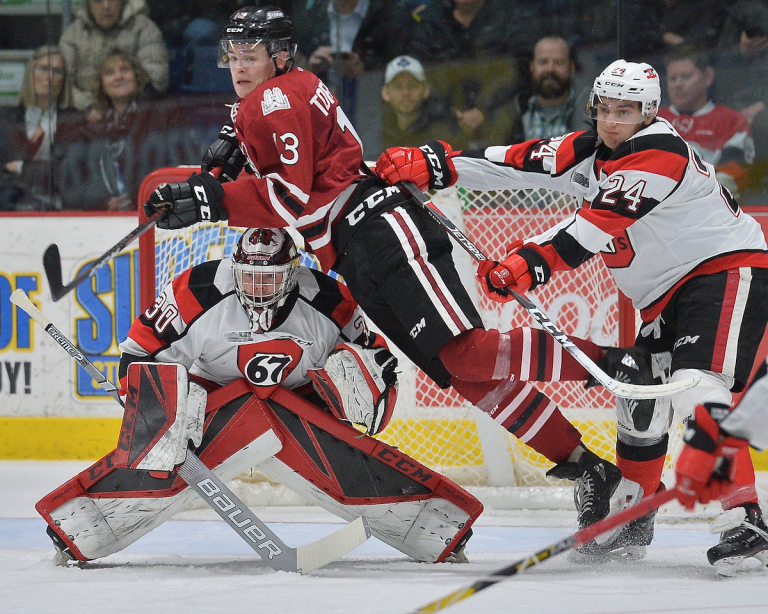 The Ottawa 67’s wrapped up the pre-season with a 6-5 loss against the Gatineau Olympics on Sunday, and that only means one thing, regular season hockey is just around the corner. In fact, the season starts Friday night! We have yet to see the final roster for the squad this season (at the time of me writing this), and that should be coming out sooner rather than later. Tough decisions have to be made by GM James Boyd in advance of the season opener in Guelph on Friday.

A look at the schedule

The 67’s play 2 games this weekend, both being played on the road. The 67’s will open the season in Guelph on Friday when they visit the Storm, who will be raising the OHL championship banner. That game is set to n being at 7:30. The 67’s will be quickly back on the bus either after the game, or the next morning as they head to Owen Sound to play the Attack in their home opener at 7:30 on Saturday night.

What should we expect?

It is going to be hard to predict the outcome of the games this weekend without knowing the roster, or how the team is going to gel early in the season, but that is true across the entirety of junior hockey. We won’t truly know how good or bad the 67’s are until later in the season, but I’m going to try my best at some predictions.

@Guelph: One thing we can be sure of in this game is the memories of how the 67’s season ended last year will be brought up numerous times before the game, during the game, and after the game. We will be reminded of the long win streak, being up 2 games to 0 in the finals, and how Guelph rallied to win 4 games in a row and win the J. Ross Robertson Cup. We will be subjected to the video tributes, celebrations and banner being lifted to the rafters at The Sleeman Centre. One the puck is down, we should see the 67’s with an advantage. The Storm lost many key pieces including Anthony Popovich who was traded to Flint, and possibly Nick Suzuki who could be staying with the Canadiens. Ottawa should be able to win this game on the backs of their returning players including the entire defence (Kevin Bahl has remained with the Coyotes, for now) and Cedrick Andree, but I wouldn’t be surprised if they drop this one either. For my prediction, I’m going to play it safe and say Guelph wins 4-3 in overtime just because of the energy that the crowd is going to bring on a special night for the Guelph Storm and their players.

@Owen Sound: With this being the home opener for the Attack, we can again expect some long introduction as the players get introduced to the fans at the Harry Lumley Bayshore Community Centre. It’s hard to tell if the 67’s have an advantage because they have already played a game at this point, or if the travel will hinder the team. Like I said earlier, it’s hard to predict the OHL at all, even more so when it’s this early in the season. Owen Sound didn’t have anyone that jumps off the page statistically last season, and they finished a .500 team (68 points in 68 games), but that can’t be used as a measuring stick for how they will preform this season. For me to predict this game, it will be a complete shot in the dark, as I don’t know how the 67’s will look right now, and I know even less about the Attack despite doing some research. Goal tending is probably going to be the difference in the game, in my opinion. Mack Guzda for the Attack, and Cedrick Andree for Ottawa, unless they decide to go with the back-up for the second game in as many nights. Ottawa has the decided edge between the pipes on paper, and for that reason alone I’m going to say Ottawa win this one 4-1.

I can see this trip going great and being 2-0 after two games, but I can also see the opposite happening and the 67’s being 0-2 after the first weekend of games. For the team and it’s players, a road trip this early can be good for the players to familiarize themselves with one another and even develop some chemistry. That is going to be more crucial for the 67’s than going 2-0 on this trip. This trip is going to be a good test for the young players on the 67’s, but it will also be interesting to see how the returning players who were on the team last year will respond going back to Guelph. Winning that game won’t be complete revenge, but it would be nice to get the win and start the season off right.

As always, be sure to follow me on Twitter @FrankieVideo and also make sure to suggest some punishments to me!