Offense stalls in second half as REDBLACKS fall to Eskimos 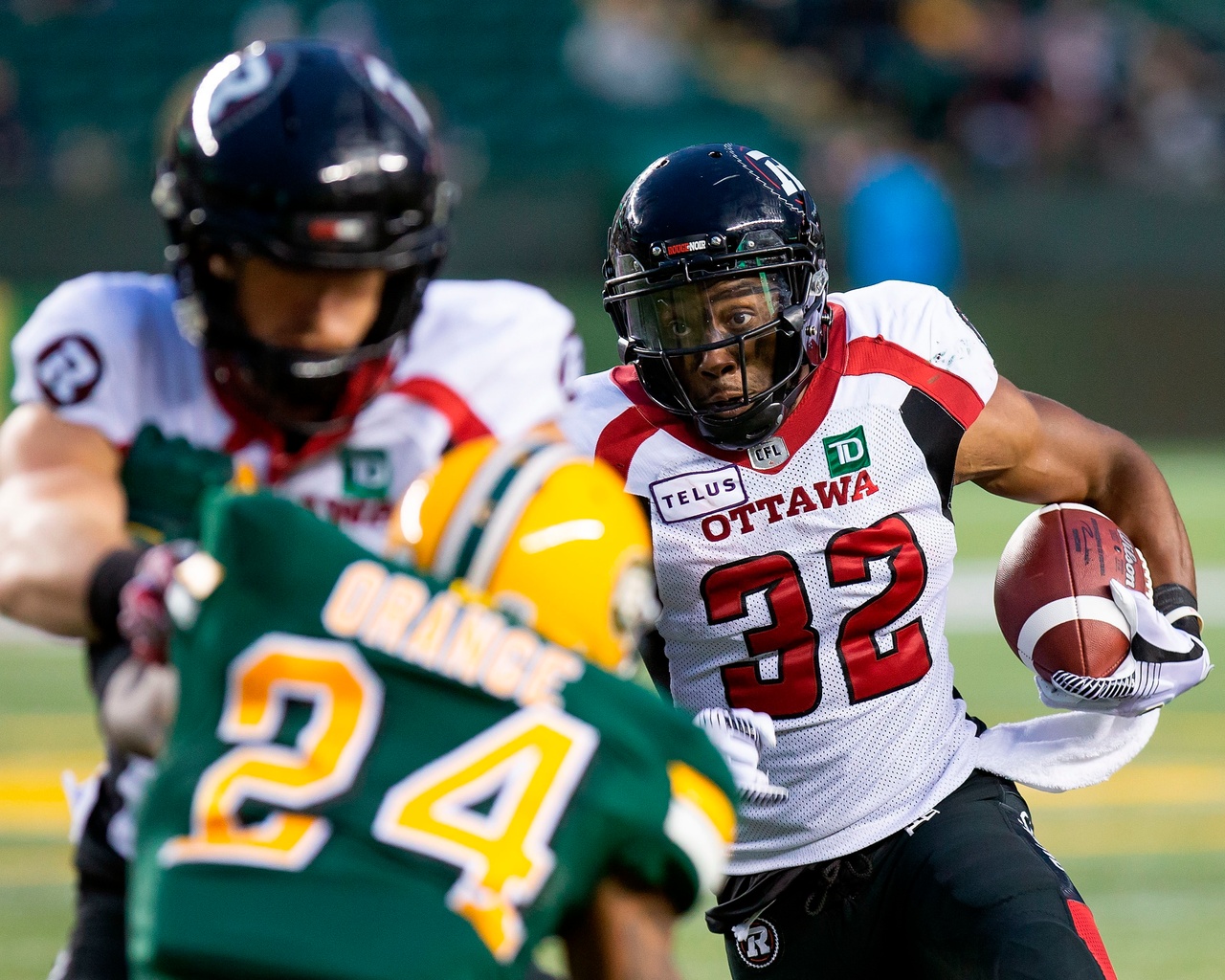 EDMONTON, Alta. — C.J. Gable‘s two rushing touchdowns and 116 yards on the ground helped lead the Edmonton Eskimos to a 16-12 win over the Ottawa REDBLACKS Friday night at Commonwealth Stadium.

Ottawa falls to 3-5 on the year while the Eskimos improve to 5-3 overall. The REDBLACKS host Hamilton next Saturday and Edmonton is at Toronto on Friday.

FIRST QUARTER
Edmonton scored on its first drive of the game, turning a Dominique Davis interception into Gable’s first rushing major of the contest, a 28-yarder that put the home team up 7-0 following Sean Whyte‘s convert. The REDBLACKS had 1st-and-10 on the Edmonton 44, but Davis was picked off by Arjen Colquhoun to end the nine play, 42-yard drive.

DeVonte Dedmon‘s 41-yard return on the ensuing kickoff set up Ottawa near midfield for their second drive. A ten-yard and 35-yard run by John Crockett got the REDBLACKS down to the Edmonton 10, but Ottawa had to settle for a 10-yard Lewis Ward field goal to cut the lead to 7-3.

Following a two-and-out by the defense, Ottawa took over at their own 33-yard line with 56 seconds in the quarter. Davis found Dominique Rhymes on a beautiful 67-yard scoring pass to put the REDBLACKS up 9-7 as the two-point convert attempt failed.

SECOND QUARTER
Both teams saw their first drive of the second quarter end with a punt. Trevor Harris drove Edmonton down to the Ottawa 24, and appeared to have a first down on a third-and-1 running play, but Jerod Fernandez stripped Harris of the ball and Avery Williams came up with the fumble recovery.

Davis completed four straight passes covering 55 yards and Crockett carried twice for 22 yards to get the REDBLACKS down to the Edmonton 9, but two straight incompletions forced Ottawa to be content with a 16-yard Ward field goal and a 12-7 lead.

Edmonton closed out the first-half scoring on Whyte’s 44-yard field goal with eight seconds left. The field goal was set up by a 33-yard pass interference penalty against Sherrod Baltimore. Harris’s pass to Greg Ellingson originally was ruled incomplete, but overturned following a challenge by Jason Maas.

THIRD QUARTER
After amassing 273 yards in the first half, Ottawa struggled to keep their momentum, finishing with just 14 yards on six plays in the third quarter. Conversely, the Eskimos racked up 139 yards in the quarter, 104 coming through the air. Most importantly, the REDBLACKS kept Edmonton off the scoreboard and took a 12-10 advantage into the final stanza.

FOURTH QUARTER
Both teams traded punts to start the final 15 minutes. Finally, it was Edmonton that broke the scoring drought. A 25-yard pass from Harris to Ellingson put the ball on the Ottawa 2, and Gable took it in on the next play to cap the seven play, 67-yard drive. The two-point convert attempt failed and the Eskimos led 16-12.

Ottawa’s final drive came with 1:25 on the clock. Davis completed three straight passes to Noel Thomas to get to the Edmonton 49, and the REDBLACKS moved up another five yards after the Eskimos were called for offsides. Davis connected with Rhymes on a 33-yard pass play to get down to the Eskimo 11 as 1:04 remained on the clock. Three straight incompletions, including passes knocked away by Anthony Orange and Josh Johnson resulted in a turnover on downs. Harris took three straight kneel downs and the Eskimos came away with the victory.

STAT LEADERS
Davis completed 22-of-35 passes for 289 yards, one touchdown and two interceptions.

Rhymes caught four of nine targets for 118 yards and a touchdown. Rafael Araujo-Lopes and Thomas tied for the team high with six grabs. Brad Sinopoli, Crockett, and Julian Feoli-Gudino each caught two balls.

Fernandez led the defense with eight total tackles and a fumble recovery. Williams and DeAndre Farris recorded seven tackles each. Anthony Cioffi posted Ottawa’s only sack of the game.

Harris finished 33-of-40 passing for 327 yards, with zero touchdowns or interceptions.

Gable had 116 yards and two touchdowns on 18 carries.

Natey Adjei caught seven passes for 68 yards while Ellingson and DaVaris Daniels both had six receptions.

RYAN’S REFLECTIONS
I’m not sure what Brad Sinopoli said or did to draw the ire of Winston October, but his under-utilization in the offense is borderline criminal. Two targets in 35 pass plays? Unbelievable.

Impressive effort by the defence in the third quarter. Granted, they did allow 139 yards; however they kept the Eskimos off the board and gave the offense a chance to extend the lead. The average yards allowed is going to go up, but holding Edmonton to 16 points is admirable.

Ten plays of 10-or-more yards by the offence in the first half, then just two in the second. Take those two away and Ottawa had 49 yards on 17 plays. Whatever adjustments were made at halftime weren’t for the better.

Two weeks in a row that Julian Feoli-Gudino has deflected a pass into an interception. Maybe it’s time to give Nate Behar a look?