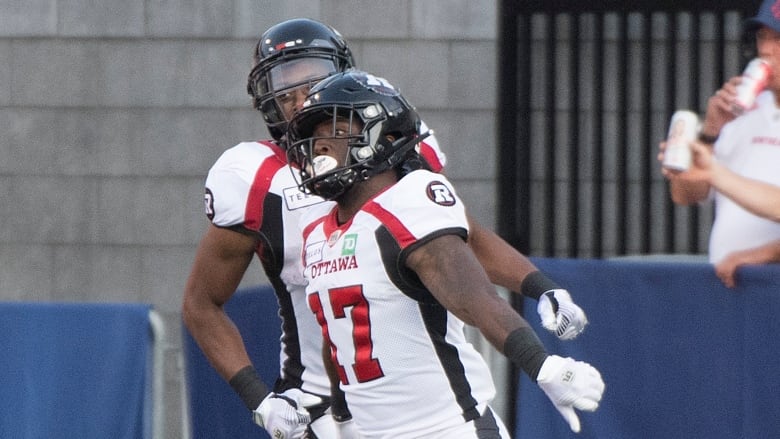 The win snapped a four-game losing streak for the REDBLACKS, now 3-4 on the year. Montreal saw their three-game winning streak come to a close and are 3-3 this season.

Dedmon became the first player in Ottawa franchise history and 20th ever in the CFL with two return touchdowns in a game. He finished the game with 377 combined return yards, setting an Ottawa record.

The Alouettes turned two first-quarter REDBLACK turnovers into a 10-0 lead, but Dedmon returned a kickoff for 111 yards to cut the deficit to 10-8. Vernon Adams Jr.’s second rushing touchdown of the quarter made it 17-8 in favor of the home team heading to the second.

The score remained 17-8 until the REDBLACKS forced a Montreal punt with 1:08 in the half. Dedmon took a circuitous 95-yard path to the end zone, breaking tackle after tackle while keeping his balance for his second return touchdown.

Ottawa took its first lead at the 13:21 mark of the third quarter on a five-yard Dominique Davis touchdown pass to Brad Sinopoli. Ward’s convert made it 21-17.

Adams suffered a head injury on the next drive and was replaced by Antonio Pipkin. Pipkin led the Alouettes to a pair of drives capped off by Boris Bede field goals and a 27-21 lead with just over ten minutes in the fourth.

Ward brought the REDBLACKS within three after hitting a 46-yard field goal to make it 27-24 with 6:48 to play. Following a Montreal punt, the Ottawa offense went 71 yards in eight plays, settling for a game-tying 30-yard Ward field goal with 21 seconds left.

Ward’s 14-yarder in overtime put Ottawa ahead 30-27. After an incomplete pass on Montreal’s first play in overtime, William Stanback caught a Pipkin pass, but the ball was stripped by Jerod Fernandez and recovered by De’Andre Montgomery to preserve the win.

Davis finished 20-of-34 passing for 164 yards and a touchdown against two interceptions. John Crockett carried 16 times for 71 yards to lead the rushing attack. Noel Thomas led REDBLACK receivers with five grabs for 43 yards while Dominique Rhymes and Caleb Holley both finished with four catches.

INSIDE THE NUMBERS
Ottawa’s defence held Montreal to 301 yards, snapping a five-game streak of allowing 400 or more yard, and also kept the Alouettes to 177 passing yards, the first time in five games an Ottawa opponent failed to pass for 300 or more.

Ward has made 67 straight field goals, now 28 more than the next longest, and includes a streak of 22 in a row from 40+ yards out.

Davis improved to 1-1 in his career against Montreal and is now 4-3 as a starter in the CFL.

REDBLACK QBs have two touchdowns and nine interceptions over the last five games.

UP NEXT
Ottawa faces Edmonton at Commonwealth Stadium next Friday.