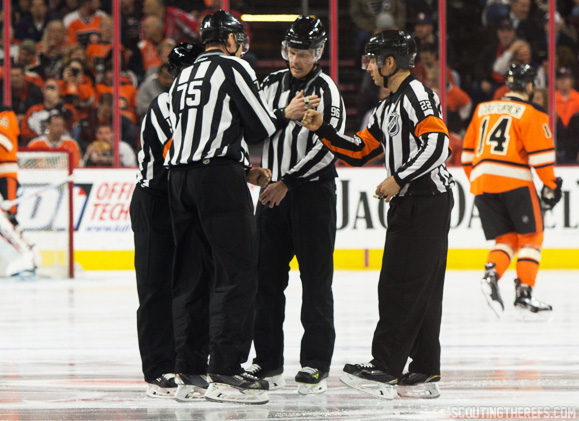 As many if not all of you have seen what happened in Game 3 of the Western Conference Final, it has seemed that finally everyone has come together and decided that Reviews need an upgrade. Here is a quick recap of what happened that game:

The NHL already has 8 scenarios where video review is mandated. These are: Puck over the line; Net off Moorings; Expiration of time; Batted; Goal off Skate; Goal off High Stick; Off Official; Shootouts / Penalty Shots.

At the same time, Coaches can challenge on 2 scenarios: Offside and Goaltender Interference. Teams can only challenge these plays IF they have a timeout. If they lose the challenge, they will lose the timeout just like in NFL. As well starting in 2017-18 season, if a team challenged a good goal for offside and no offside was found, the challenging team would be assessed a delay of game penalty.

So as one can see, all the reviewable plays are on goals, all other penalties other than Goaltender Interference can’t be reviewed. This means that it is up to the 4 officials to make the calls and potentially change the outcome of games. Now back in the day this was no problem as technology wasn’t advanced enough to point out the glaring mistakes of Human Error. However, in 2019 we have so many angles of plays that most of the time will prove the referee wrong and in some severe circumstances such as these playoffs it can be the deciding factor in a game or even a series. So this brings up the question: Should Coaches be able to challenge regular penalties or should the league implement a VAR official like in soccer to get the referee to review a play. This article will discuss the pros and cons of each.

In the CFL (Canadian Football League) a coach is granted only one challenge and if they lose the challenge they lose a timeout similar to NHL. However CFL coaches can challenge judgement penalties such as: Defensive / Offensive Pass Interference; Illegal Contact; Roughing the Passer / Kicker. This means that if a call is missed a coach can make the officials review it which is great. However what has happened (especially last season) refs were missing many calls and if a coach had already challenged one missed call earlier, regardless of the outcome they could not challenge another call. This meant that Coaches had to choose carefully and the flow of the game wouldn’t be touched that much but at the same time there were still many calls that were missed. If the NHL were to implement this strategy of Coaches being able to challenge all penalties, it wouldn’t mean that calls would stop being missed, most likely it would be that instead of two major calls being missed only one would be missed. For example: Let’s say in the Sharks vs Avs game, the Avs challenged an offside call and they won the challenge. By the CFL rule, they would not have any more challenges so they would not be able to challenge the hand pass goal. This method can help correct a huge call such as the Pavelski hit or the hand pass, but, if there is another huge call, there will be no one there to challenge it and fix it.

This brings me to my next idea of ‘VAR’. VAR (Video Assistant Referee) has been slowly implemented into soccer. It was used in the 2018 World Cup and got many positive reviews. The way it works is that there is an official in a room with all the screens of different angles and if they see an infraction such as offside or a penalty that wasn’t given, they will call the referee over to the sideline to look at a replay of the play. The referee will then look at the video and make his decision based off that. Note that the referee still makes the final decision so it is still him in charge. The review takes on average 2-3 minutes and sometimes 5 on huge plays but at the end of the day, there is a clear call with evidence to back it up so no one can complain. In the NHL, they already have a War Room, so it wouldn’t take much for them to call the referee over and explain what to look for. However, some things would have to be adjusted for, such as the VAR can only be used for major penalties so that play isn’t stopped for every minor penalty that is missed or called incorrectly.

My solution is to implement all 3 ways. Coaches can challenge penalties and if they lose, they lose a timeout. If there is a trend of Coaches just calling reviews and using that time as a timeout, then NHL can implement the Delay of Game penalty again. As mentioned before, the NHL already reviews scoring plays so if there is a VAR, that official can be looking for goaltender interference and offsides as well so that coaches won’t have to challenge that. As well the VAR will be able to help makes proper calls on all scoring plays and major penalties.

For those complaining saying this will cause too many stoppages… it’s a dilemma we will have to live with. Either we take the time to make the correct calls or we let things slide like the hand pass or the Pavelski hit. In my honest opinion, I’ve seen how VAR has changed soccer and it has helped a lot. There are almost no big calls that are missed or wrongfully given and the reviews take almost no time off the game. If the NHL really want to change what has happened these playoffs, they will have to change their review system for sure.

What do you guys think? Let us know down below on the comments or on our Twitter and Facebook.