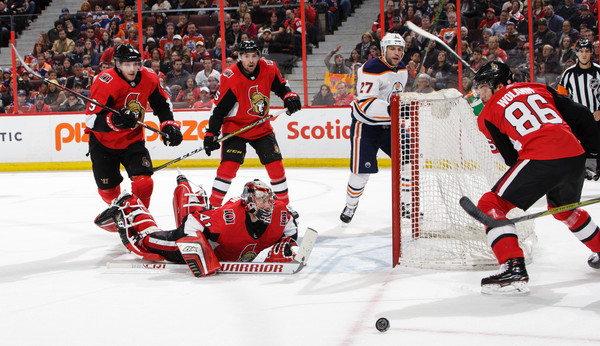 The Sens long off-season officially began a few weekends ago. With that, it means it’s time for us to start looking back on the season that was. This past week we graded the performance of the team’s forwards which you can find here. This article will look to the the performance of the team’s blueline this past season. The position saw many different faces over the course of the year and saw a lot of potential from young players. The team also however, traded away a top player at this position in the entire world to open the year and it definitely showed. Without Karlsson, let’s just say it wasn’t pretty… The team finished dead last in terms of goals against and were the only team to allow more than 300 goals this year. Also, while not entirely on the defense, the team ranked 9th last on the PK. However, no matter how bleak, there was some light at the position that should provide fans with hope going forward.

Honestly only one player on this unit deserved an A. Just like the forwards, the only player to crack this group was one of the team’s young, budding stars. That player is:

Chabot was a treat to watch this season. He made some incredible plays and should be one of the key pieces of this rebuild we are in the midst of. While it appeared that Chabot’s compete level dropped after his injury and the big three were traded, he still made enough incredible plays to warrant this grade. Chabot broke the double digit mark for goals this season and was on pace to finish 5th in the league for points amongst defenseman.

he’s going to be fun to watch

Over the course of the season three different players played their way into a B grade. All three of these players were relative bright spots for the blueline. They are all young players and hopefully will be key parts of the overhauled defense group going through this rebuild. The first of these three is one of the San Jose six magic beans, Dylan Demelo.

Demelo was acquired from San Jose at the start of the season as one of the pieces in the Karlsson trade. Demelo slotted in nicely alongside Chabot to start the season and provided a good steadying presence for the young phenom. Along with providing some much needed veteran experience to the blueline Demelo also set career highs in points and goals this season (22 and 4 respectively). Demelo also provided great off-ice content to the Sens’ various social media platforms this season and was able to provide fans a good laugh through some dark times this year.

Christian Jaros another one of the team’s young blueliners earned his way into the B ranking. Jaros’ first NHL season and only second year in North America was a positive one. Jaros played his way into the team’s starting lineup from the very start this season. Although that isn’t exactly a ringing endorsement given the caliber of the lineup this season, it is still quite the accomplishment. While Jaros struggled with injuries and did have his ups and downs this season, such is expected for a young player acclimating himself with the NHL. Hopefully next season the team will have more actual NHL caliber players on it and Jaros will be insulated so that his game can continue to grow.

The third player to reach this grade is none other than Christian Wolanin. Although Wolanin played only 30 games in the NHL this season due to some rather incompetent decision making by management, he was still one of the team’s most impressive defensemen. While he did have his fair share of mishaps and turnovers, such is expected from a young, dynamic, puck moving defenseman acclimating himself to the speed of the NHL. In his 30 games Wolanin quickly earned his way into quarterbacking the powerplay and was constantly making plays along with good breakout passes. He should be a mainstay on this unit next season and I expect him to take another step forward.

Lajoie started the season on fire and took the league by storm. He tallied his first goal in his very first game and went on to start the year with 7 points in 8 games. Lajoie would predictably cool down as the season went on and just did not appear ready for the 82 game grind that is an NHL season. Lajoie was left out to dry by the coaching staff and management as the season dragged on. Constantly playing Lajoie with a defensive liability in Cody Ceci is far from setting a young player up for success. Lajoie should’ve been sent down earlier in the year when it was clear his body was wearing down and he simply was not ready for a full NHL season yet. With all this in mind Lajoie still showed a ton of promise this year. Coming into the season he was a relatively unknown commodity. After this year he has established himself as a legitimate NHL prospect for the team.

If you follow us on social media at all during the season you already know how we felt about Ceci’s play this season. He just looks so lost in defensive coverage pretty much all the time. Ceci is just not the type of the player you want your promising young defense saddled with. For the second straight year now he has finished in the -20’s and looks lost as ever in his own zone. While his defensive game continues to be less than ideal, he did step up somewhat offensively this year. He ended up matching a career high in points this year and tallied his most goals since the 2015-16 season. At the end of the day, please just please, I am begging, do not give Ceci a big contract this offseason.

Similar to Ceci, Boro struggled defensively this season. Boro was often injured and was limited to only 53 games. In the games he did play he always gave it 110% which is all that can be asked. Boro has his weaknesses in his game and they showed this year now that he was forced into a bigger role. He averaged over 15 minutes per game and spent the majority of that time hemmed in his own end. At this point in the rebuild the blueline is better off without Boro filling a spot that could go to a young player like Wolanin or Lajoie next season.

One player earned a failing grade on the blueline this season and that was Ben Harpur. Harpur earned the failing grade this season for his lack of contributing pretty much anything positive on the ice this season. In over 50 games this year Harpur tallied only 1 goal. His offensive game is essentially nonexistent. With that in mind you’d expect Harpur to be making contributions defensively to keep his spot in the lineup. However, he didn’t do much of that either. He was one of the main players on the Sens’ abysmal penalty kill this year. Also, much like Boro, he spent the majority of his time getting peppered with shots against in his own zone. Not only could he not muster a break out with any sort of consistency all season, he pretty regularly was pushed off the puck with ease by players much smaller than him. For a player who is 6’6” and 222 pounds it is ridiculous to be watching players half his size throw him off the puck with ease.

Overall the Sens’ blueline had a rough year defensively. The group was able to generate a fair amount of offense this season. Dynamic players such as Chabot made some quite remarkable play this year. However,  the defense’s main job is to keep the puck out of and away from their own net. They simply could not do that this season as they ranked last in goals against coupled with a last place finish in shots against per game. From a defensive standpoint this group needs a ton of work going forward. Countless times this year they looked lost in their own zone and for some reason seem incapable of covering the front of their own net. All is not doom and gloom for the group going forward though. They do have some very promising prospects in Brannstrom and Bernard-Docker to name a couple. These players should pair well with the dynamic talents such as Wolanin and Chabot going forward. All we as fans can do is hope a coach is finally brought in that can eliminate the defensive woes that have plagued this team for years now.