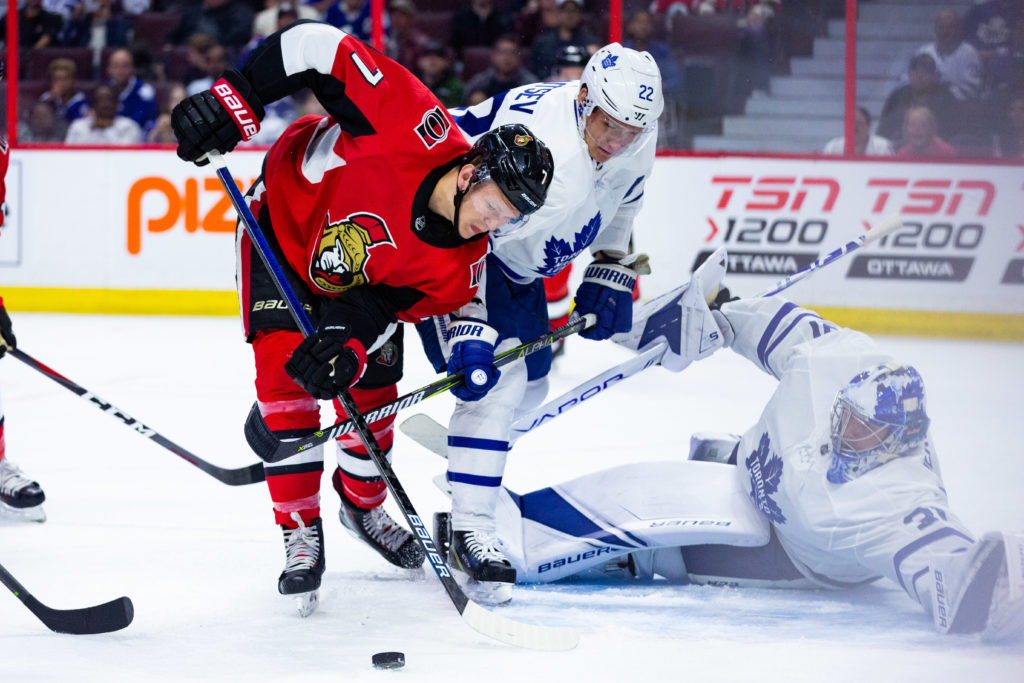 Another season has come to an end and it’s time to look back on the year that was. This was, for the most part, a season that couldn’t end fast enough for Sens fans. This season saw many of the team’s top forwards depart, and in turn left the roster fairly bare of talent. This must be taken into consideration for grading certain players as their quality of linemates significantly deteriorated over the course of the season. While the team lacked any one player shouldering the load offensively (no forward currently on the roster finished the season with more than 50 points) they did receive promising production from some young players. The team also saw some players take their game to the next level with increased ice-time. However, some faltered with their added responsibility this season. The group also only saw one player break 20 goals this season, and astonishingly, every single forward currently on the Sens’ roster except for the three players acquired at the deadline have a negative +/-. While as a whole, the performance was underwhelming from the position it did have some bright spots.

Very few players were worthy of receiving this grade this season. Prior to being traded Mark Stone, Matt Duchene, and Ryan Dzingel’s play all would’ve warranted an A grade but they are no longer apart of the team. This is obviously a large part of why the group struggled as the quality of players dropped significantly after they were traded. Excluding these three players only one other player earned an A grade for the season:

Honestly, without Tkachuk’s incredible play this season the year would have gone from rough to completely unbearable. Brady was a treat to watch night in and night out and rarely, if ever noticeably took a game off. Tkachuk finished the season with the most points and goals out of this past year’s draft class and also finished the season 2nd amongst rookies for both points and goals. Tkachuk kept even the worst of games entertaining this season and kept on producing even after the Mark Stone trade, which many feared would derail his season.

Two players earned a grade of B this season for their play. Both players well surpassed expectations for their point totals this season. These two were more or less the team’s top 2 centres all season long, although that isn’t exactly a ringing endorsement. The first is none other than Colin White.

Colin White completely redeemed himself as a prospect this season and surpassed even the wildest expectations. After a slightly underwhelming season last year White redeemed himself this year centering the team’s top line for the majority of the season. White and Tkachuk were a great pairing this season and White finished the year on pace for 57 points had he remained healthy. All in all it was an excellent season for Whitey, and had he converted on some more of dozens of chances he had down the stretch he may very well have earned an A.

Oh and he scored this absolute beauty.

Chris Tierney makes up the other half of this category. Tierney was one of the 6 magic beans acquired in the Karlsson trade with San Jose. He saw a much larger role this year with Ottawa than he ever has before in his pro career. Tierney earned a B grade as he lead the team’s forwards in points and set a career high in the category with 48. However, Tierney failed to reach double digits in goals after scoring 17 last season. His play was also very streaky this year and struggled after he was taken off of Stone’s line early in the year.

Bobby actually had a better season than he has the past few years with the team. It was also one of the healthier years he’s had since joining the team, only missing 4 games all year. Bobby put up 42 points this year and 15 goals, which ignoring his behemoth of a contract is not production for the role he’s taken with the team. If Bobby can continue to string together similar seasons going forward that would be great as he’s actually a pretty good player to have around all the young players expected to join the roster going forward.

Balcers was another one of the players acquired for Karlsson and actually may turn into a sneaky good piece for the team. Balcers started the year in Belleville and earned himself an extended look in the NHL after the deadline. He took advantage of this opportunity and started gaining the trust of the coaching staff as he saw his ice time increase throughout his NHL stint. Balcers may turn out to be strong depth for the team and can hopefully build off his strong start with the organization.

This group was very meh for the majority of the season. Which is honestly an upgrade over how watching the team get dismantled felt. This group is made up of the following

Smith started the year by getting waived and fans absolutely flipped. If only that was the worst thing to happen this year. Smith responded by starting the year hot and scored early this season. Smith predictably cooled down and produced the type of year you’d expect from him at this point in his career. He didn’t necessarily have a bad season but with the increased role he saw he didn’t exactly seize the opportunity.

Paajarvi had a reaaalllllyyy streaky season. He went months at a time without scoring or getting any points this year. However, when he was producing he was creating chances for himself and teammates. He also was fairly good in the defensive zone and at the right price provides good veteran depth to this young lineup. If Paajarvi was able to play at a more consistent level this season he would have graded higher.

Pageau’s season was unfortunately thrown off the rails pretty much from the start. Pageau injured his achilles in training camp (on the very first day no less) and this limited him to only 39 games this season. After returning from injury he really didn’t seem like his usual feisty, energetic, hard-nosed self. He was also forced into playing the team’s number 1 centre role down the stretch whereas he thrives more in a third line role exploiting favorable matchups. Pageau is known for out working his opponents and understandably he just didn’t show as much of that as he usually does.

Mikkel Boedker was the only forward to earn a failing grade this season. Boedker was acquired from the Sharks as the main piece in Hoffman trade. That trade was a failure literally the minute Dorion hung up the phone. Hoffman set career highs in both points and goals this year whereas Boedker was a healthy scratch on literally the worst team in the league to closeout the season. I don’t want to completely dump on the player because it was tough for anyone to succeed on this team, but let’s just say he really did not provide much of anything to the team this year.

Overall the Senators’ forwards had a shaky year after the big three were traded. The team struggled to score, finishing in the bottom half of the league in goals per game. They also struggled defensively, having another subpar penalty kill and as previously mentioned, only three players not in the minus. Plus/minus is obviously not a super important statistic anymore, but when the entire position is in the negative it is worth pointing out. It will be very interesting to see how this group shapes up next season with many new and young faces expected. It will hopefully entertaining to see how this group can bounce back next season and hopefully improve.