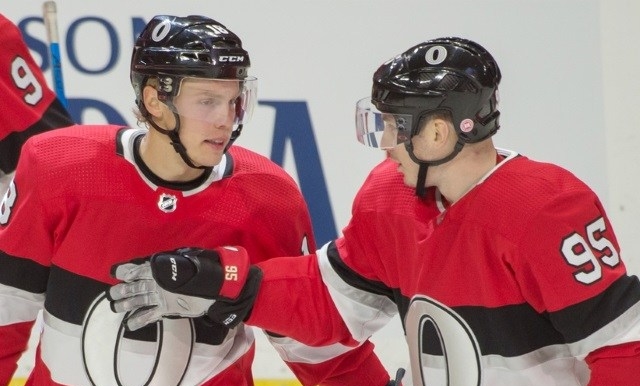 A very busy few weeks lies ahead of the Senators organization. With three of the team’s top players contracts expiring this summer the Sens figure to be very active. While Mark Stone and Matt Duchene have been drawing plenty of interest from the public, and rightly so, Ryan Dzingel is flying somewhat under the radar. While Stone and Duchene are drawing plenty of media hype and rank among the top of all tradebait lists, Dzingel is going to be a key piece for a team at the deadline.

While it would be ideal for the team to keep all three, with the state of the organization I simply can’t see that happening. With the strict financial limitations of the this team I view a player such as Dzingel falling victim to this team’s ever shrinking pocket book. Dzingel has been very productive for the team the past three years and deserves a substantial pay day this summer, one I simply can’t see the Sens willing to be a part of. Dzingel is having a career year this season and is on pace for 60 points and 31 goals, both career highs.

Once again, ideally the team would re-sign Dzingel for the excellent and consistent offensive contributions he can provide to help a team that figures to be full of young players going forward. However, that seems less and less likely with each passing day. With this in mind, it appears to shift the focus to what possible return a player of Dzingel’s caliber could fetch. Dzingel provides excellent secondary scoring and is a great complimentary player who can also occasionally create his own chances. This considered, he should be able to attract a fairly high return. Ideally he would be able to fetch a first round pick and a decent prospect in a trade, two pieces that would be beneficial in this alleged rebuild the team is in the midst of. While picks and prospects would obviously be nice, my ideal trade situation for Dzingel is a little different and focuses more on a sure thing. My ideal trade for Dzingel would be to send him to the Hurricanes in exchange for one of their plethora of young defensemen. Carolina has expressed interest in acquiring a player such as Dzingel and have also made it clear they’re willing to move out one of their defensemen. The player that interests me the most is Brett Pesce. Pesce is absolutely solid on defense and is only 24 years old. Pesce is under contract for another five years at an absolute steal of a deal with a cap hit for only just over four million dollars. Pesce would be an enormous upgrade over Ceci on the right side and would be perfect to pair with Chabot on the top pair for years to come.

These possible trade scenarios are of course purely speculative however, in dark times such as these a fan can dream. Ideally the team ends up re-signing him and he helps provide some offense next season alongside players such as Batherson and Brown. With each passing day and very minimal news on any contract negotiations between the Sens and Dzingel I simply can’t see this ending any other way. With the team’s main focus obviously being on Duchene and Stone right now, they can’t forget about big trade pieces like Dzingel and Ceci. These kind of deals are pivotal to any sort of rebuild and the team simply can’t afford to botch these next few weeks or it could send the team back years. We’re in for an interesting few weeks Sens’ fans, let’s see how things go.