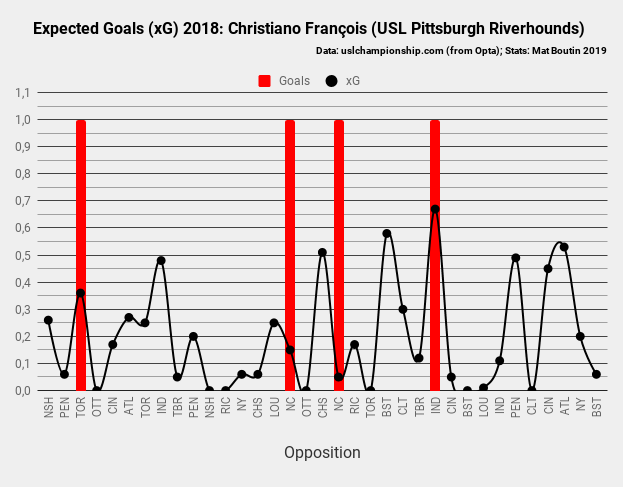 (This article is also published in French)

Let’s talk statistics. For the first article on thise subject, I will take a look at one of Fury’s newest addition, Christiano François.

At 16, Christiano was doing what he loved most on a pitch in Cabaret, Haiti, when the 2010 earthquake hit. He resettled to the US to live his dream, going to a New Jersey prep school, and the University of Maryland.  You can learn more on how he ended in the USL from Haiti in this Pittsburgh online news article.

His 2018 basic stats confirm Christiano’s role as a proficient winger, whose main role is to cross and attack the net from the wing. In fact, half his shots and 3 out of his 4 goals came from the wings.

Last year, Christiano was 7th in the league, and 4th in the conference for the number of crosses, with 178. This is well ahead of Fury’s leaders Carl Haworth and Christian Portilla respectively with 97 and 96. In the Eastern Conference, he finished 15th with 5 assists (tied with Steevan Dos Santos), and 21st with 46 shots (slightly ahead of Fury’s top shooter, Kevin Oliveira, who had 44).

He ranked 14th in the league and 6th in the conference with 59 chances created*.  Carl Haworth and Steevan Dos Santos were way below, with 30 and 29 chances created, ranking 39th and 45th in the Conference, respectively.

Christiano can also score, including this golazo:

He converted 4 goals in 2018, and we can reasonably expect between 4 and 8 goals from Christiano next year. My Expected Goals (xG)* analysis with the 2018 data is an xG of 6.92. This leads us to say that Christiano has offensive flair, but his role is not to be the striker that will give us in excess of 10-15 goals.  However, we would be right in expecting more than Dos Santos’ 5 goals from last season! The graph below is his xG per game last season:

Nicknamed Cheetah, his acceleration and speed should keep Fury fans on the edge of their seats. His speed enables passing and crossing which creates chances and lead to goals. See for yourselves:

Additional analysis also demonstrates that Christiano brings something that Fury FC somewhat lacked offensively since beginning in the USL. Some takeaways when comparing Christiano with Fury’s 2018 select players:

While we’re talking about it, let’s watch Christiano dribble:

Through basic analytics of key statistics per 90 minutes, Christiano has generally brought more successful crosses and dribbles, key passes, and above all created chances than most offensive players from Fury’s 2017 and 2018 squads. But above all, what we can see is that Christiano appears to be a much more complete player, in those stats than other Fury players that mostly perform in certain areas.

Although the analytics below are not predictive statistics by definition, we could reasonably expect that Christiano will do the same in 2019, but he will need to be supported by players that can capitalize on these strengths.

These abilities will definitely help Ottawa, notably with set pieces.  This is one example from last season:

But this is as long as we have a player that can do the tap in. And while most players can do the play above, so far, we do not have a true striker. Christiano, unfortunately, does not have the equivalent of his partner Neco Brett (15 goals in 2018) on Fury FC’s 2019 squad.

What he can do, however, is create chances. And with chances, goals will come. In the end, while we had and have comparable players in Ottawa, Christiano’s statistics show that he is a more complete offensive player than past and present Fury FC players in the USL.

Expectations will be high for Christiano in Ottawa.

One thought on “Fury through numbers: C. François”