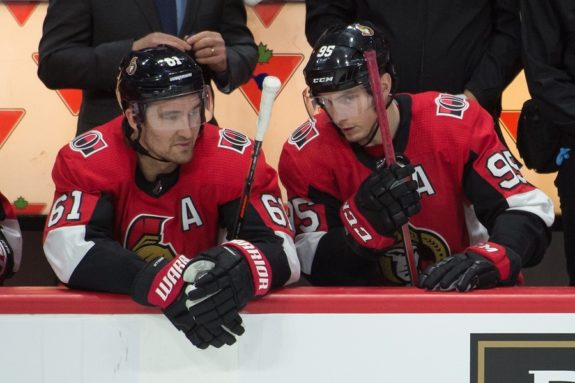 Well Sens’ fans, here we are again. It seems like just yesterday we were writing about the team possibly moving out superstar Erik Karlsson (find that article here). We find ourselves in a similar position as it appears more and more likely every passing day one of (or both) Matt Duchene and Mark Stone are as good as gone. Each day these two go without a new contract in place, it makes it more and more likely they will be leaving the organization. It has been reported that the Senators are not willing to come up from their $8 million offer to Duchene. That however, is a whole different discussion.

If the two parties can’t reach an agreement in the coming weeks it doesn’t make sense for the organization to keep Duchene. The team is nowhere near a playoff spot and has no need to keep Duchene for the remainder of the season if he is not extended (unlike Columbus with Panarin). If he can’t be signed by the deadline the team has to trade him and try and salvage some sort of return on investment. While the original trade is looking worse and worse every day for the Sens, which is not an indictment on the play of Duchene by any means, the team needs to cut its losses and try to get something back. If the team is truly committed to this rebuild they keep referring to they can’t repeat the mistake of the Islanders and let their number 1 centre walk away for nothing in the summer. If Duchene makes it clear to the team he will not resign they’ve got to get some pieces back to try and help the team be better in the years to come.

Mark Stone is in a similar situation thanks to the Sens wasting their opportunity to lock Stone into a long-term deal last summer. Stone however, is much more crucial than Duchene in my opinion. The team simply can’t afford to lose a player like Stone. He is without a doubt a fan favourite and it would absolutely crush fans and players alike to lose him. Stone is this year’s Karlsson in a way. Last year we begged for the team to keep Karlsson, well this year we’re doing the same for Stone. If the organization hopes for fans to keep any sort of interest in the team going forward the handling of the Mark Stone situation is critical.

While it is absolutely astounding that the Sens have managed this roster so poorly that they’ve gone from a middle of the pack playoff team to a basement dweller with no first round pick this is a chance for them to make a smart long term decision. After the organization decided to move on from Karlsson it became obvious this team was destined for dark times ahead. With many of the team’s top players on expiring contracts and unlikely to return they need to act swiftly and effectively. The team simply cannot afford to “whif” on the month of February like they’ve done so many times before. The coming month is absolutely crucial to the future of this team. Whatever this team decides to do this month with the likes of Duchene, Stone, Dzingel, and Ceci could define this organization for the next 5-10 years. So please Pierre, do not mess this up. Any hope fans may have left in this organization is riding on the critical month ahead.