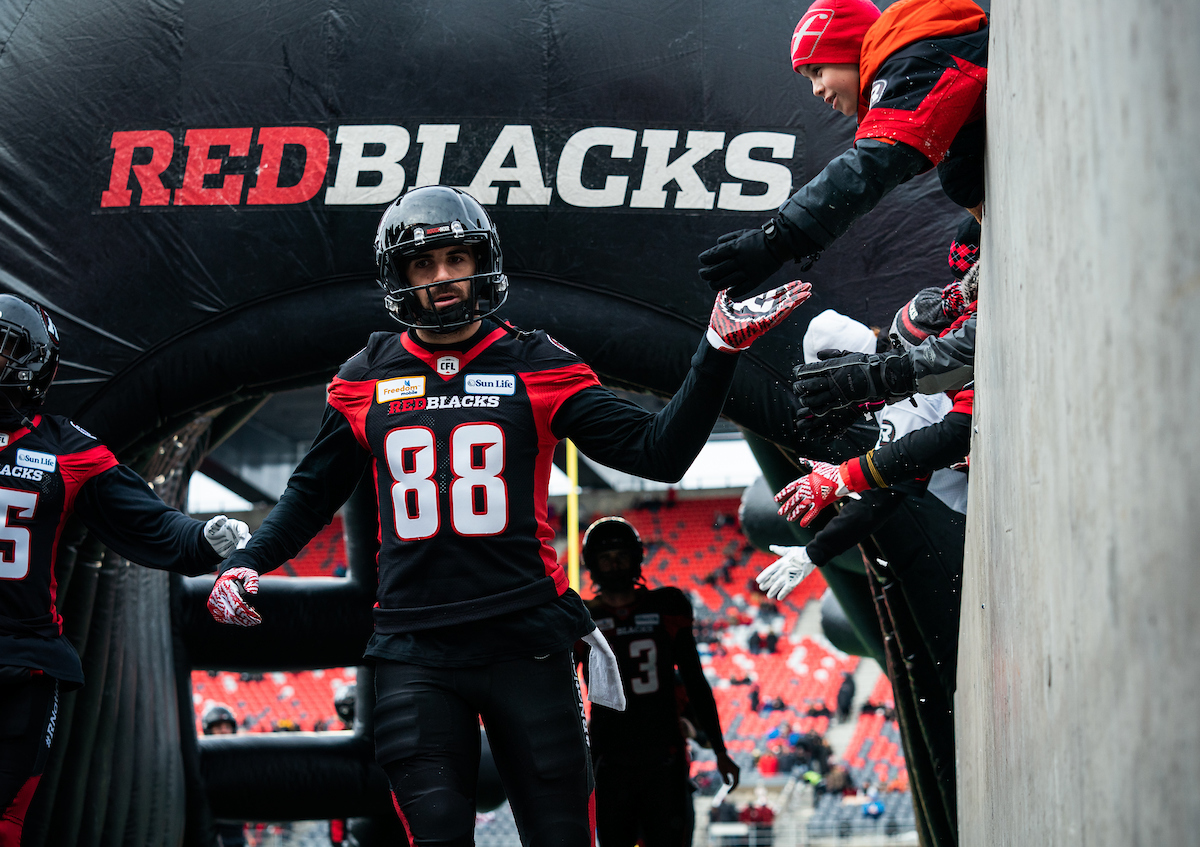 The Ottawa Redblacks are the 2018 Eastern conference champions. They will play in the country’s biggest sports event on November 25th at 6pm ET. Their opponent? The familiar Calgary Stampeders, whom they faced in the 2016 Grey Cup.

Trevor Harris and his son pose next to the Eastern champions trophy, along with the other team members.

Odds are, Hamilton will win this one. You can’t beat them 4 times!

The Redblacks defeated the Hamilton Tiger-Cats 46-27 in front of a sold out crowd of      24 100 people, and they were nothing short of spectacular while doing it.

Ottawa scored a total of 6 touchdowns during the game, all of which were throws by Trevor Harris, who broke the all-time record for touchdown passes in a playoff game. The defence had an incredible night, forcing 3 interceptions, most of which had big returns directly inside the red zone. The defence pressured Masoli and caused 3 pass knockdowns as well.

The offence totaled for 367 passing yards in the game, and 90 on the ground.

Speaking of those passing yards…

Trevor Harris. Oh man, what a night he had.

0 interceptions, 6 touchdowns and a 90% completion rate! For context, most quarterbacks hover in the 60-65% range in any given game. That is phenomenal number! Trevor Harris might just be the most accurate passer in the CFL. Of course, a Quarterback is only as good as his receivers. Greg Ellingson, Diontae Spencer, Brendan Gillanders, Marco Dubois, and JC Beaulieu all contributed to touchdowns, while Brad Sinopoli and RJ Harris also deserve mentions for clutch performances on critical plays. As a whole unit, the Redblacks have arguably the best offence in the league.

But of course, not all points were from touchdowns…

That’s not something you hear every day.

In fact (as of november 20th) , it has been 153 days since you could say that. Apart from his debut game, Ward hasn’t missed a single field goal during the 2018 season. He broke the all-time record for consecutive field goals in pro football, and highest FG completion percentage in the CFL.

But on Sunday afternoon, his performance was less than stellar. He missed a 44 yard field goal and two converts.

Ward is a phenomenal kicker, and he will no doubt play on Sunday, but TD converts should be automatic. In fact, this isn’t the first time Ward has had a hard time with converts. Despite now missing field goals, he has missed a few converts during the season.

But I mean, this all goes out the window once he wins most outstanding Rookie AND Special teams player.

And so we meet again…

The 2016 Grey Cup was arguably one of the best Grey Cup games ever.

And I’m not saying that as a Redblacks fan, but as a genuine Canadian football fan.

The underdog team comes out of the gates with a massive lead. The opponents manage to create a huge comeback to tie the game at the last second. They head into overtime. They score a touchdown, but miss the 2 point convert. Will it be enough. The opponent team heaves out a massive pass directly into the endzone and it was almost caught. They throw a second time, nothing. This is it. One last chance. They throw the ball, it goes into the hands of the receiver, but it slips out, jumps into the air and lands on the ground. The game is over.

This looks like it’s going to be a close matchup. Calgary’s defence definitely has the edge, and the question is will the Ottawa O-line be able to protect Trevor Harris?

If they can manage to do that, Ottawa will have VERY good chances to win the game. But let’s just hope this grey cup is as close and entertaining as the last two years.