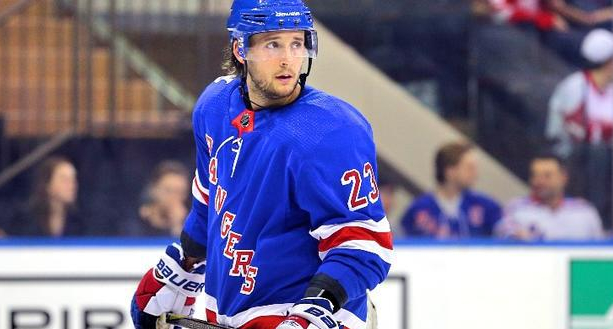 Ryan Spooner is currently a forward for the New York Rangers. Spooner was originally drafted in the 2nd round of the 2010 NHL Draft by the Boston Bruins. Spooner has been a top prospect every step of the way and has proven to every team that has taken a chance on him so far that they made the right choice.

Salmon with honey, pasta and broccoli and a chocolate chip cookie

Play soccer to warm up

Beginning: Spooner was born in Ottawa, and was a top 5 selection of the Peterborough Petes in the OHL draft. He was one of the top prospects coming out of the OHL and was even invited to the CHL Top Prospects game.

Do you have a fondest memory from Junior hockey that stands out to you?

Scoring my first OHL goal against the Kingston Frontenac’s.

What was the process like as a young man getting drafted into the top 5 of the OHL and immediately being asked to make a significant on ice contribution?

I honestly thought as a 16-year-old I was not going to play a lot. So there was no pressure, I just showed up to camp and tried to prove that I could play on their team.

Was the goal always to one day be an NHL player and did you have a backup plan if hockey didn’t workout?

No one really knows if they will one day make it to the NHL, you play at a young age to have fun and make friends. I was fortunate enough to make it. If I am being honest no, my entire life has been hockey. I have invested all of my time and effort into the game and made it my #1 priority.

What was it like being invited to the CHL top prospects game essentially cementing your spot as one of the top draft eligible prospects in the country?

It was a fun experience to get the opportunity to play with all the other top prospects. Scored the game winner on a pass from Taylor Hall which was pretty sweet.

Can you take us through what it felt like getting selected in the 2nd round of the NHL draft validating all your hard work and countless hours put into perfecting your craft?

It was very rewarding, my family & girlfriend was very proud of me and I was proud of myself. Accomplishing one of many mile stones in my career.

Middle: Spooner has spent the majority of his career as a member of the Boston Bruins organization.  After multiple seasons earning his stripes in the AHL with the Providence Bruins Spooner was able to cement his place as an everyday NHLer.

What was it like getting to don the sweater of one of the league’s most storied franchises the Boston Bruins?

At first I did not know how to feel because I was a Montreal fan, but I was thrilled to be drafted by the Bruins and excited to be a part of their organization. It is always an honor to play for an original 6 team.

You scored your first NHL goal in overtime and you managed to handle your celebration like a 50 goal scorer. How were your emotions inside?

Took me 40 games to score to I was shocked. I was just happy that we won the game and I helped my team out.

How did you deal with heightened expectations on yourself by playing for a team expected to be a perennial contender?

I found that when you put to much pressure on yourself it never works out. I treated the opportunity as any other and focused on my personal development.

Can you describe the atmosphere at bruins home games, especially during the playoffs playing in front of a crowd known for their energy?

Present: This past season Spooner was traded to the New York Rangers as a key piece in the Rick Nash deal. Spooner also just signed a 2 year extension with the club cementing his role as a key part to the team’s retool of the roster going forward.

Not many players can say they’ve played for two original 6 teams, what has your experience been like so far in New York?

My brief stint there was very good, they treated me well and I am excited to play there for 2 more years.

You signed a two year deal with the Rangers this off-season, how does it feel knowing that such a storied franchise believes you can play a significant role for their team going forward?

I was happy they wanted to keep me around for more than 1 year. It shows that they have faith in me which goes a long way as a player and building the confidence required to perform. In return I want to show them they made the right decision and having the best year of my career.

What is it like being able to call one of the most historic arenas in the world home?

Never a dull moment, even before I played for the Rangers it was one of my favorite rinks to play in.

Ryan Spooner has spent his entire life committed to the game he loves and there is nothing else he would rather do for a living. From the young Ottawa kid who grew up playing for fun with his friends to the now NHL pro, Ryan is as passionate as ever about the game that he loves. We would like to thank him for taking the time to answer some questions for us and wish him the best of luck in New York!