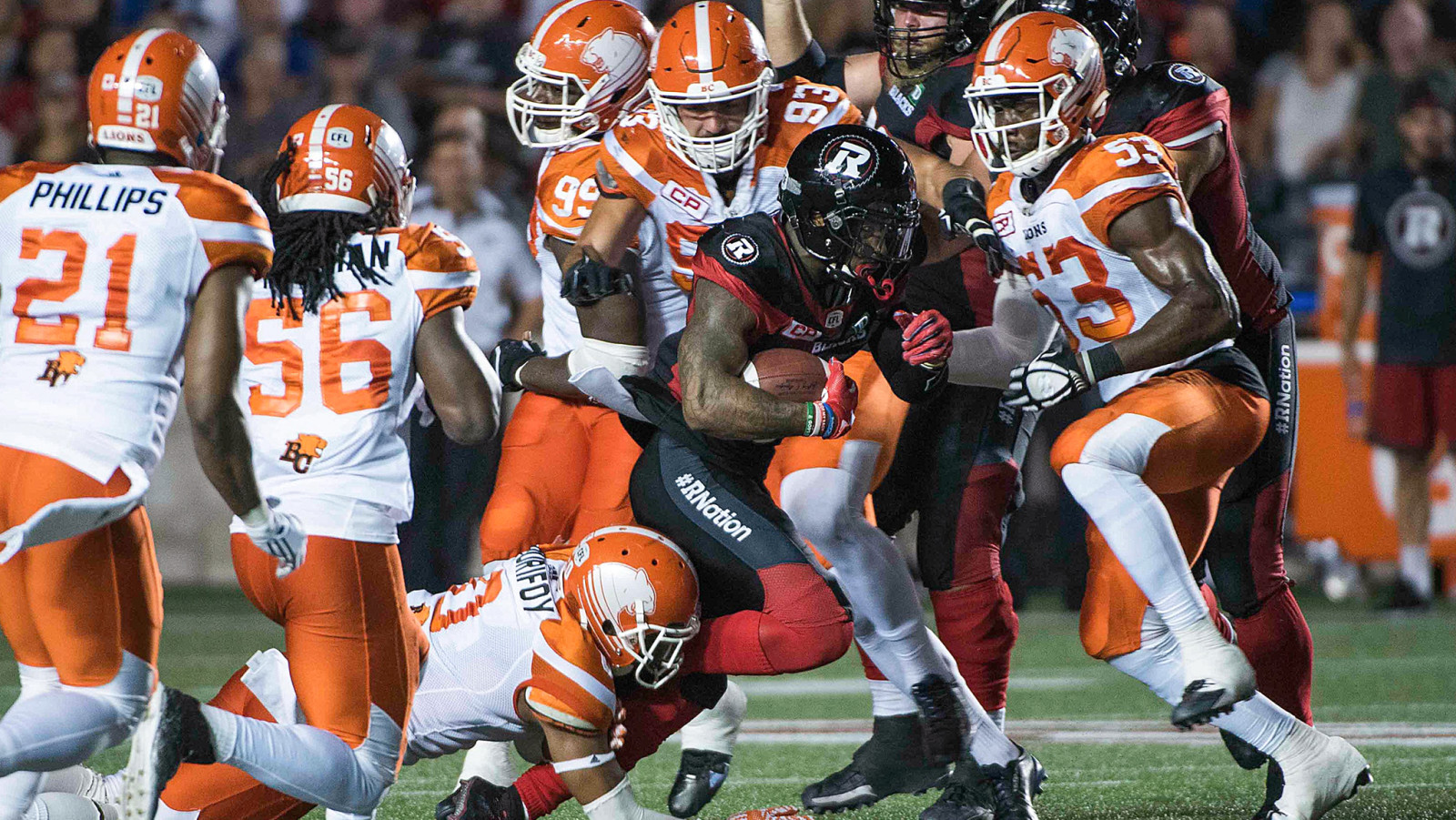 In week 6 the BC lions and their orange creamsicle uniforms travel to Ottawa for a Friday night faceoff with the REDBLACKS. Before hand their was some really troubling news as earlier in the week the team released national DB  Teague Sherman after being charged with sexual assault. The league issued a statement to the teams stating:

“The Canadian Football League is aware that sexual assault charges have been filed against Teague Sherman. He has been released by the Ottawa REDBLACKS. Commissioner Randy Ambrosie has informed all member clubs that the league will not register a contract for Sherman should any team attempt to sign him. The Canadian Football League has and abides by a policy on violence against women and condemns violence against women in all its forms.”

It is highly important that the league sticks to it’s policy no matter what. Moving on to another less troubling topic is what happened on Wednesday night when Ottawa Fury took on Toronto FC at TD place and a TFC supporter group nearly set the north stands on fire and almost ruined the field. Small tangent here but I remember the main complaint by TFC fans when the Argos moved into BMO field in 2016 was that CFL football would ruin their “Precious Pitch.” Well as we can see today that is false. they over reacted and they not only almost set a stadium on fire and ruined Ottawa’s field but, also could have injured players as after one of the flairs that they set off got too hot to handle, they threw it on the field. TFC fans chalk this up as “well they do it in Europe all the time”. Normal North American conventions say that “no you are being stupid and dangerous”. Now I know that what I said does not represent all of the TFC fan base but this is also a fan base that nearly destroyed their own stadium after winning the MLS cup last year so even if the CFL destroys their “Pitch” they would have scorched it long before.

Moving on to happy times! So after the terrible showing in week 5 vs the Stamps the REDBLACKS come out blazing or well sort of. In the opening quarter, the REDBLACKS marched the ball effectively. Harris was throwing efficiently not getting an in completion on the first drive with 65 yards thrown on 6 attempts and 11 yards rushing for 76 yards in total. Sadly, the REDBLACKS ended the drive settling for a 11 yard field goal by Ward but 3 points closer to a win none the less. After another 2 and out by BC, Ottawa gains the ball back but a few shaky moments with a fumbled snap and a few penalties against, once again the boys in red and black end up settling for a Ward field goal but this time from 47 yards out. Still a hell of a better first quarter than last week as Harris thew for 127 yards and with 19 yards rushing for the REDBLACKS and 6 points.

The second quarter would be a bit of a speed bump as the Lions would record two TD’s and Ottawa would go 2-and-out three times before getting a field goal by the end of the half making it 14-9 for the Lions.

The 3rd quarter would be more of the same for both teams where BC would get another TD and the REDBLACKS would get a field goal. Fortunately the halfway mark of the 3rd quarter would signal a Momentum swing as Ottawa had it’s 3rd longest drive of the game and finally capping it off with a Harris to Sinopoli 13 yard TD catch making it 22-19 still for BC but with one more quarter left to play. The REDBLACKS kick it into high gear only allowing 3 points while scoring 10 themselves As the 4th started with a turnover off a forced fumble that was recovered by Pruneau at the Ottawa 31. For the most part of the 4th it was a dual of the Punters as both defenses held strong but a late drive by Ottawa going 80 yards with 65 in the air and 15 on the ground ending with a 2 yard Powell rushing TD after a beautiful acrobatic 25 yard reception by Powell to tiptoe the sidelines to set that up and win the game 29-25 after the defense closed it out.

With this win the REDBLACKS move into first in the East with a 3-2 record. I like to talk about the game Harris had which was a great one to regain confidence with. While nothing outstanding being only 363 yards and 1 TD he did go 30 for 44 and threw it smartly. He was calm and cool and at times able to scramble to buy time or just run it him self which help set up key plays. This is the kind of play we all hand for him and I hope he keeps this grove now. The O-line did their jobs as well giving Harris time which is important and a great contrast the the game a week prior where there was none to be found. Powell may not have had a great overall rushing game getting only 50 yards but the 61 yards he caught and the 54 yards after the catch off those dump off plays says it all. He also got the game winning TD and as mentioned the great set up the play prior. The last star of the game for Ottawa is Sinopoli who popped off with a 171 yard game off 11 catches and a TD tying his career high in catches set against Montreal earlier this year.  Ellingson and Spencer had quiet games only getting 37 and 38 yards each. Spencer though getting 194 yards off kick returns. Lewis Ward hit 5 field goals on 5 attempts kicking a total 180 yards and having a 47 yarder as his longest.  The Defense did not record a sack but that forced fumble was crucial in getting momentum so a good trade off. Kevin Brown recorded 7 tackles with Pruneau getting 6. Ottawa allowed BC’s offense to gain 444 yards which out numbered Ottawa’s gains by 14 so to state this was a close game but the Defense stepped up when they needed to the most.

This wraps up the REDBLACKS weekly recap. Up next for the REDBLACKS in week 7 is a trip to Hamilton and a late Saturday matinee with the 2 and 3 Ti-Cats who lost to the Roughriders 31 to 20. A big time rivalry game that should help Ottawa put some distance between the others in the East.