There’s some good, some bad and throw in some ugly. 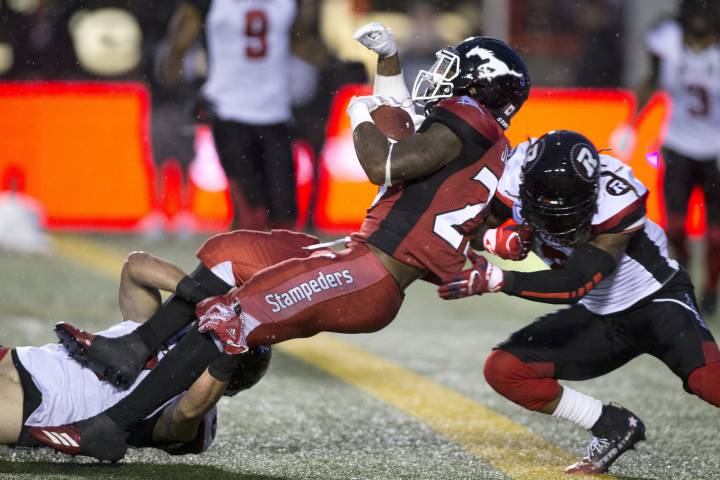 The title says it all. After seeing Ottawa take it to Saskatchewan last week, Ottawa then traveled west to take on the Western champs in Calgary. I will take a side track here and say the ugly part mostly refers to this side tangent of CALGARY WHO OKAY-ED THAT UGLY LOOKING UNIFORM OF YOURS! STOP WEARING THE BLACK HELMET YOU ARE THE ONLY TEAM TO WEAR A RED ONE! There will be more about the ugly later, but in the end Ottawa fell to Calgary 24-14 so lets start with the good as well there is some.

I like to say Powell had a great game, rushing for over 100 yards (123 to be exact on 13 attempts) which in this league is nicely done though he didn’t get a TD but did average 9.5 yards per carry which is above average in the CFL so good job there. Saw some hustle towards the end with Ellingston showing good effort down the stretch when needed. He had 97 yards on 6 catches and a TD as well as catching that long 56 yard bomb at the end of the 3rd. Derico Murray had his second pick of the year and Antonie Pruneau had 9 total tackles most of anyone on the field. I also want to talk about Dominique Davis. With Harris losing it Davis stepped in and tried to make something of it and though with the 5 minutes he had to make something he did go 5 of 7 with 41 yards and 1 TD which is a small sample but on his effort of the sadly great Defensive stop by Calgary on the goal line he still pushed which seeing that I liked. gave some hope that Davis might be the real future if Harris can’t snap back to form. Just a thought. The Defence had put up a good effort in the first half allowing no points in the 1st, only a TD in the second and a field goal in the 3rd but sadly ran out of gas in the 4th. Considering how Calgary scored 69 points total between Week 1 and 2  along with their 41 point Grey Cup rematch vs Toronto it was a great effort on their end but by the end of the 4th they couldn’t hold firm. Sad about that fumble though in the 4th giving Calgary prime field position but is what it is.

Harris? I’ll start with that. What are you doing man. 44% completion rating, only 135 yards. 14 incompletions in the 1st half alone.  Some overthrows when you needed to hit them while there were open. Not setting his feet when he had the time though to his credit there were some times where he did hit his boys and they dropped it which is give and take. Sometimes he would dump it off 2 or 3 yards when he needed to go at least 10 or 15 so he needs to look. For the most part he had the time. Though there were also times when the O-line failed him. The other Bad I am going to mention is the bad luck. Such terrible luck. the INT that led to a Calgary score was unfortunate to watch and the fumble was too. Momentum killers for Ottawa and Momentum swingers for Calgary. That goal line stand was just brutal in terms of luck. the pass and push wasn’t enough to break that line which would have possibly kept the game even. The strip fumble that went Ottawa’s way with 18 seconds left was a terrible gift as down by 10 with 18 seconds is well no time at all. Like I mentioned key drops could have also kept momentum even. Not many penalties to speak of but bad ones to take at bad times.

I said my piece about Calgary’s uniform choice for this game which prompted Bo Levi Mitchell to say: “I didn’t know what team he was on.” So Calgary STOP WEARING BLACK HELMETS! Side note maybe Ottawa decided the white helmets were ugly and retired them, so lets hope but then again lets harken back to the time that Ottawa debuted the signature uniforms vs Calgary and it looked even more ugly. But the even bigger ugly of the game was Dirty Bird. Indeed to that. Kyries Hebert who went airborne to deliver a dangerous hit to the head of Calgary receiver DaVaris Daniels which sadly I can’t really condone which of course led to a one game suspension which prompted John Cornish to call for his head after that. It’s something that we can’t have in this league. He needs to tighten down on that type of play which was unnecessary as Daniels was already going down but good thing Daniels was alright and kept playing. Trying to change a culture in football and doing stuff like that will not help.

Ottawa came up against a juggernaut this week in Calgary. Historically Ottawa has done well vs the Stampeders and this week is no exception. Some bad luck plays and some questionable decisions made the difference here. Though the record falls to 1-1 Ottawa looks to correct their mistakes vs Montreal next week at Percival Molson Memorial Stadium who Montreal just came off a decent win vs Saskatchewan.

2 thoughts on “There’s some good, some bad and throw in some ugly.”