Big bang out of the gate! 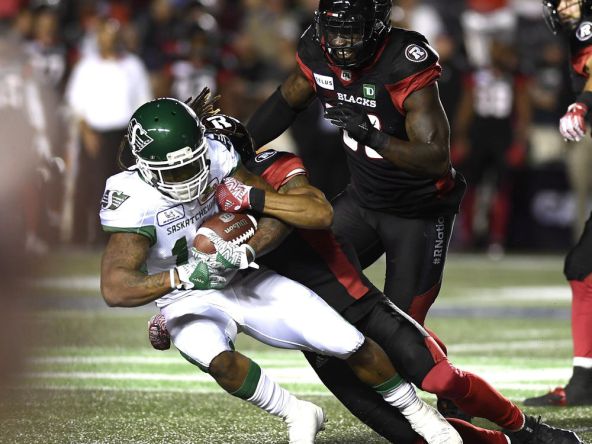 If you remember last November the last meaningful game at TD place was the Grey Cup between Toronto and Calgary in an instant classic. The last game before that was a runaway barnstormer the Saskatchewan Roughriders gave the REDBLACKS 31-20 in the East Semi. So to start the season for Ottawa with a week 1 bye and in week 2 a rematch vs the Roughriders in the same place last Thursday night who Saskatchewan came off a 27-19 victory in week 1 vs Toronto. This was exact vengeance for what happened last November.

Ottawa came out with great confidence to start driving down well and giving the Riders 2 straight 2 and outs but only getting 2 field goals before Saskatchewan would put up a major off a 32 yard pass from Collaros to Williams-Lambert, making it 7-6 for the GREENWHITES at the end of the 1st. The 2nd Quarter is when Ottawa would rip this game straight from the Riders hands like they did with the Ottawa name putting up 19 points while limiting Saskatchewan to only 7. The defense was in the spotlight for this quarter as Johnathan Rose would pickoff Collaros and take it 56 yards to the house early and converted by a 2 pointer to make it 14-7. On the next drive the REDBLACKS would again pick off Collaros as Purifoy would only get an 18 yard return but Collaros would leave the game with an injury so insert Brandon Bridge for the Roughriders. That pick would be reviewed for Pass Interference but the call on the field would stand. The Riders, however would get some revengedas Duron Carter would pickoff Harris and go 28 yards to the house to tie the game at 14 all. William Powell would put up a 15 yard rushing TD to separate the two teams and Ellingston converted a 2 pointer just for good measure on the drive following the pick-six. Ottawa would have the Roughriders stall out on their next drive before adding 3 more and stalling out the Riders again only to miss a 48 yard field goal to end the half 25-14 for Ottawa.

The 3rd Quarter would be the real decider in this game as the REDBLACKS D gave the Green Riders no chances. Even after an amazing 56 yard passing TD from Harris to Spencer and a Harris 3 yard run for the 2 points after for the 33-14 lead Derico Murray would intercept a Brandon Bridge throw to kill any retaliation attempt. The rest of the 3rd was quiet on all fronts. The 4th would be mostly quiet, the Roughriders would get a field goal to gain some hope of a comeback, but William Powell would have none of that making it 40-17 after the 1 point conversion. The defense would play shutdown the rest of the game forcing a 2 and out as well as a fumble that was forced by Ellis but recovered by Leonard. Saskatchewan would try to make a game of it on their next possession but time ran out and Ottawa claimed the 40-17 victory at home to start the season. A great contrast to the 31-31 tie of yesteryear.

This was a really great start as both the Defense and the Offense looked confident and ready. A bit of some rust in the first, but that is to be expected when you have a bye in week 1. Harris would go  26/36 (72.2%) 345 yards (Longest being 56 yards) and 2 TDs in the air, but 1 INT. He would also have 16 yards on the ground in 4 attempts with 4 yards per carry and the longest being 9 yards. William Powell would go 94 yards on 19 carries and 1 TD as well as 24 yards in the air on 2 catches and a receiving TD. Dominique Davis would sneak 4 yards on 2 attempts. In the Air Greg Ellinston would break 100 yards totaling 104 on 8 catches with his longest being 23 yards. Spencer would have 82 yards on 6 catches with a monster 56 yard TD. Sinopoli with 74 yards on 6 catches, Noel Thomas would have only 1 catch but for a monster 42 yard gain in the air. Beaulieu would get 18 yards on 2 catches and to end off, Dom Rhymes would only get a yard off 1 catch.

For the Defense “Dirty Bird” Hubert would get 6 tackles. Purifoy Rose and Murray would get 1 INT each with Rose getting a defensive TD off his. Avery Ellis would force 1 fumble which would be recovered by A.C. Leonard. Ellis would also record 2 sacks on the night along with Michael Wakefield with 1 sack. The defense would give up a total of 345 yards (94 rushing and 251 passing) but only limit the Riders to 1 offensive TD and 6 pass knockdowns. Special teams stats were good. new Kicker and former Ottawa Gee Gee Lewis Ward hit 3 for 4 making a 44 yarder (26 and 23 yarders as well) as his longest but missing from 48. Spencer would only get 13 yards on 4 punt returns and 21 yards on 1 kickoff return. Purifoy would have 57 yards with his longest being 31 off of 2 kickoff returns while Punter Richie Lionel booted the ball 6 times for 240 yards  and the longest being 52. He also had almost 400 yards in 6 kickoffs totaling 394. The REDBLACKS were for the most part disciplined as they only recorded 4 penalties losing 45 yards while the Riders would have 10 flags losing 64 yards. The O-line held firm as not a single sack was recorded against Ottawa.

For the most part this was a well balanced game and a great start to the season giving fans good hope for the weeks to come yet the test has yet to be administered because next Thursday in week 3 Ottawa will go to Calgary who just came off a 41-7 dismantling of the Argos last Saturday.

One thought on “Big bang out of the gate!”