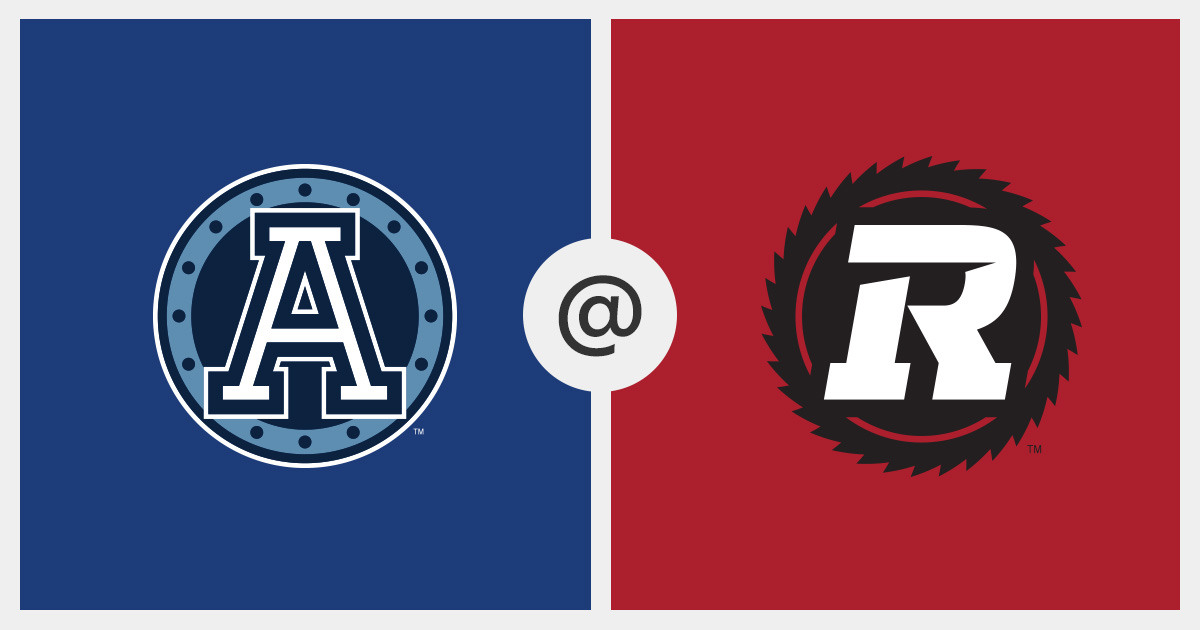 The Ottawa Redblacks were dominated on all three sides of the ball at home against the Toronto Argonauts in an embarrassing 45-15 loss, their 21st loss in their last 22 home games.

In a season of horrendous losses, this was arguably the worst of the bunch with the Redblacks looking flat and uninspired all game long.

With the win, the Argonauts clinch a playoff spot, meanwhile, the Redblacks are that much closer to securing the first overall pick in the 2023 CFL draft.

Both Redblacks’ QBs struggled to find their rhythm and were under constant duress by the Argos’ defensive line which recorded three sacks, 10 QB hits, and were in the QB’s face all day. The Redblacks’ QB duo struggled all game long, completing 33/54 of their passes, 368 yards, no TDs, and five INTs – a good chunk of those yards came in garbage time. You’ll never win a game with five interceptions.

Nick Arbuckle played the first half and was very underwhelming, missing open passes and struggling to move the ball. In the second half, Caleb Evans was also constantly running for his life. He didn’t have a lot of time to look downfield to make his reads and find the open receiver. It’s hard to complete passes when you are constantly under duress and have no time to scan the field, but that’s what a QB is paid to do.

As a result, the Redblacks struggled to get their run game going because there was always an Argonaut in their backfield before the running back could see a lane through the line. Devonte Williams had 47 of the Redblacks’ 74 rush yards.

Conversely, the Argos’ offensive line opened up holes for their runningbacks – A.J. Ouellette and Chad Kelly combined for 107 of the Argos’ 116 rush yards and a rush TD – and gave MacLeod Bethel-Thompson tons of time to go through his progressions before finding an open receiver. Bethel Thompson was smart with the football and efficient all night, completing 21/29 passes for 245 yards, three TDs, and one INT.

Couple that with several holes and missed coverages in the Redblacks’ secondary all game; many of which led to many big plays downfield for the Argos’ offense which led to touchdowns.

The Redblacks’ defensive line recorded two sacks, and five QB hits and did not generate as much pressure on Bethel-Thompson as the Argos’ defense put on Arbuckle and Evans.

The loss wasn’t entirely Arbuckle’s or Evans’ fault. Receivers dropped passes, the run game wasn’t as effective as they wanted it to be, the secondary made a lot of mistakes, the team was disciplined and took a lot of penalties, and neither QB had a lot of time in the pocket before facing pressure.

In addition, coaching was a huge problem tonight, just as it has been all season. Paul LaPolice was very conservative with his playcalling all game long, especially on the last play before halftime on their own 49-yard line, where Arbuckle took a knee instead of trying a hail mary or anything to get momentum back. They were only down 12 points at that point, the game was not yet out of reach. Giving up mid-game – which is essentially what that play call told Redblacks’ fans LaPolice was doing – is not going to win you any football games.

Also, on two occasions in third and manageable situations inside the Argos’ 30, LaPolice elected to go for field goals instead of touchdowns when the game is still in reach and when he has been preaching all year to end drives with seven points, not three.

However, despite all this, Arbuckle and Evans combined for a whopping five interceptions. Two of Evans’ three interceptions were returned for pick-sixes in the fourth quarter to seal the game for the Argos.

Both of Arbuckle’s interceptions were horrible throws right into the defender’s hands. His first interception was immediately after Abdul Kanneh’s picked off Bethel-Thompson in the endzone. Instead of driving downfield to score points, the Redblacks gave the ball back to the Argos inside their 30 and the Argos punched it in with A.J. Ouellette for an 8-3 lead after the successful two-point convert. His second interception was after the Argos made it 11-6 with a field goal, the Redblacks had a chance to take the lead but turned it over near midfield.

Interceptions are bad, but when they lead to points for the other team or points off the board for your team, they’re even worse.

Another bad mistake was when Devonte Dedmon fumbled the ball while trying to return Boris Bede’s missed 50-yard field goal and the Argos took over inside the Redblacks’ five-yard line. This resulted in a TD to give the Argos a 25-9 lead. Evans’ first interception led to a 25-yard TD pass from Bethel-Thompson to Markeith Ambles to make it 31-9 for the Argos.

After that, Evans threw a 35-yard pick-six to Maurice Carnell to make it 38-9 and an 88-yard pick-six on their very next drive to make the score 45-9. Offensive “genius” Paul LaPolice could only manage one touchdown, in garbage time, which is embarrassing and needs to be fixed before this offseason.

On top of that, the Redblacks had seven turnovers and only turned forced two turnovers against the Argos. When you have a turnover differential of minus five, chances are you’re not winning the game. That was the case with the Redblacks tonight.

“We were coming off a bye week, it’s my fault. I have to make sure we’re ready to play,” LaPolice said. “Every time we started to do something, there would be a critical error. We didn’t perform close to our standards, and I’m disappointed.”

With the Redblacks, whenever they fix an issue that plagued them in a previous week, a new issue arises the next week and costs them. This season, playoffs are looking extremely unlikely, so the best course of action is to move on from LaPolice, hire a new coach, and address some biggest needs (CB, OLB, S, OL, WR) in the draft and compete next year when Jeremiah Masoli is healthy

The Argos game was another extremely frustrating game in a year filled with nothing but frustration, disappointment, and hardships for the Redblacks and their fans. Hopefully, the Redblacks (3-10) can forget about it before they play the BC Lions next week on the road, and the Argos (8-5) will play the Stampeders.

One thought on “Redblacks pummeled 45-15 by Argonauts, dominated from start to finish”