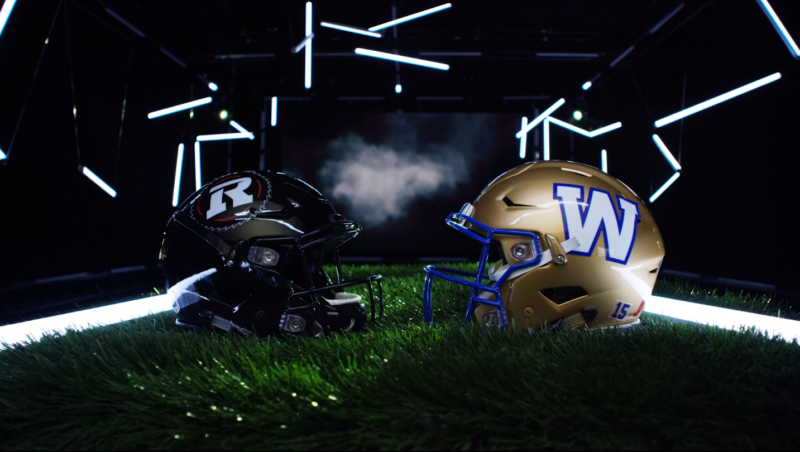 One thing is for certain. Competitive football is back in Ottawa with Jeremiah Masoli at the helm. Masoli finished the night completing 24/34 passes for 380 yards, one touchdown, and one interception. Masoli spread the ball out and was slinging it deep down the field all game long. Five Redblacks’ receivers (Jaelon Acklin, Darvin Adams, Marco Dubois, Nate Behar, and Llevi Noel) recorded over 50 yards. Shaq Johnson had 43 yards but caught Masoli’s only passing TD.

After getting a stop on their first defensive drive, the Redblacks came close to getting on the board first on their first offensive possession. Masoli delivered a perfect strike to Acklin on 2nd down and Acklin couldn’t hang on to a pass that fell right into his hands. He was wide open on the play and if he made the catch, he would’ve scored a touchdown and the Redblacks would have a 7-0 lead. However, the Redblacks were forced to punt.

The Bombers responded nicely on their next possession. Zach Collaros showed why he was the CFL’s Most Outstanding Player in 2021 leading his team on a long and efficient 66-yard drive down the field. He gave the raucous crowd something to cheer about by avoiding pressure from the Redblacks’ defense before throwing a beautifully executed 24-yard shovel pass to running back Brady Oliveira who juked around a few Redblacks’ defenders before getting to the Redblacks’ three-yard line. Despite taking a loss on a first-down run, the Bombers recovered well and Collaros found who else but Greg Ellingson for a TD to give the Bombers a 7-0 lead.

The Redblacks’ offense showed they are just as electric as the two-time defending champs. Following a huge kickoff return, it only took Masoli and the offense three plays to find the endzone. Masoli connected with a wide-open Nate Behar in stride for 38 yards to get to the Bombers’ 25-yard line. After a five-yard rush from Devonte Williams, Masoli calmly fired a dime to Shaq Johnson in the endzone for a 20-yard touchdown which tied the game 7-7.

After scoring the touchdown, the Redblacks’ defense stiffened up, got a stop, and forced the Bombers to punt. Unfortunately, the Redblacks were unable to do anything on their next

offensive drive and gave the ball back to the Bombers.

Collaros drove the Bombers drove down the field and at the start of the second quarter, the Redblacks appeared to get a stop on defense and hold the Bombers to a field goal. The Bombers had a 3rd and 2 at the Redblacks’ 40 and looked to be lining up for a 48-yard field goal. However, the holder (backup quarterback Dakota Prukop) bobbled the snap but some quick thinking from Prukopp allowed him to scoop the ball up and maneuver around the defense to pick up the first down with his legs. The Redblacks’ defense bent but didn’t break in the red zone and held the Bombers to a 20-yard field goal to take a 10-7 lead.

On the first play of the Redblacks’ ensuing drive, Masoli showed everyone once again that he has a powerful arm after launching an accurate 54-yard pass down the field to a wide-open Marco Dubois to set up the Redblacks’ with a first down inside the Bombers’ 20-yard line. The Redblacks were unable to punch it in but the efficient Lewis Ward hit a 17-yard field goal with ease to tie the game 10-10.

After getting a stop on defense, the Redblacks drove down the field before stalling at midfield. Richie Leone’s 67-yard punt was not returned out of the endzone and the Redblacks took their first lead of the game with a rouge. They led 11-10.

The Blue Bombers drove down the field in very limited time with a few fantastic throws from Collaros. The Redblacks almost capitalized on their outstanding defensive play to that point with a huge turnover but defensive back Monshadrik Hunter couldn’t secure the ball which landed right in his hands after teammate Randall Evans came in unblocked on a blitz which forced Collaros to underthrow the ball. If he made the play, it likely would’ve been a pick-six, instead, the Bombers punted it away.

The Redblacks would start at their own 15 after the punt and drove down the field in no apparent hurry with 2:30 left in the half. A defensive pass interference penalty against the Bombers kept the Redblacks’ drive alive, and the Redblacks efficiently but slowly drove all the way down to the Bombers’ 10-yard line, however, they weren’t able to capitalize on their long drive with a touchdown or a field goal because the clock ran out on them after LaPolice elected not to call a timeout. The Redblacks lead 11-10 at the half, but it should’ve been a lot more. Getting no points on that drive was ultimately quite critical in a two-point loss.

The Redblacks’ kicking game remained perfect after Lewis Ward hit a 39-yard field goal on the Redblacks’ first drive of the second half to remain perfect on the night to give the Redblacks a 14-10 lead. The connection between the two former Tiger-Cats teammates Masoli and Acklin was the critical force on this drive leading up to the field goal.

On the Bombers’ next possession, the Redblacks’ defense appeared to get another stop on second down but a very questionable defensive pass interference penalty against defensive back Justin Howell gave the Bombers another first drive and kept their drive alive. A few plays later, Howell got his redemption, forcing the first turnover of the night. Bombers’ receiver Dalton Schoen coughed up the ball after being hit hard by Howell and Sherrod Baltimore pounced on the loose ball to give the Redblacks a possession on their own 32-yard line.

Masoli’s ability to air the ball out can pay great dividends but can also cause some problems. Masoli launched deep passes on both plays of the Redblacks’ drive following the fumble recovery and Bombers’ defensive back Nick Taylor made Masoli pay with an interception to set up the Bombers’ near midfield. Neither turnover led to points, and the Redblacks sustained their four-point lead heading into the fourth quarter.

Ottawa’s defense had played very well to that point. After allowing a touchdown on Winnipeg’s opening drive, they only allowed a field goal for the next two quarters. The Bombers had four offensive drives from the beginning of quarter number three until midway through quarter number four and the Redblacks held them to three two and outs and one turnover

Early in the fourth quarter, the Bombers’ got the momentum swing they needed. Short yardage quarterback Caleb Evans appeared to have more than enough for the first down, initially and after he pushed the pile forwards, but a questionable call by the referee led to the Redblacks’ second turnover. The Bombers’ got the ball back on their 47-yard line.

With the clock beginning to become a factor, Collaros’ clutch gene started to take over and the Bombers’ offense started rolling. Collaros engineered a 10-play, 63-yard drive that saw several passes to Nic Demski and Dalton Schoen, and a nice run from Collaros and Prucott capped off the drive with a one-yard TD run to put the Bombers up 16-14 after Liegghio missed the extra point attempt.

The Redblacks still had a chance to win the game and their offense played like it.

After a long kick return from Terry Williams was called back, the Redblacks started at their own 15-yard line with 6 minutes left, only down 2 points. The Redblacks’ offense did not panic, however. Masoli threw a perfect pass to connect with Acklin on a 52-yard pass to set up shop at the Bombers’ 43-yard line. The Redblacks would advance the ball only 10 yards further before Ward hit his third field goal of the night, this one from 42 yards out to give the Redblacks a 17-16 lead with 3 minutes left.

The Redblacks’ defense got a stop defensively but only drained 1:15 off the clock. The Bombers’ got the ball back at its own 33 with 1:45 left. After safety Antoine Pruneau almost got an interception vs Collaros on the Bombers’ first play of the drive, Collaros ran for a first down on second down but had to come out of the game after taking a hit to the head.

Dru Brown, the Bombers’ 3rd string QB, came in with relatively no experience, but as calm as ever, he lead the team down the field completing all three of his passes for 51 yards, finding Ellingson, Schoen, and Demski), before a huge run from Oliveria set them up at Ottawa’s 17-yard line with under a minute left. After two plays to inch closer, Liegghio hit a 25-yard field goal to put the Bombers’ up 19-17 with six seconds left. The Redblacks had one more chance with one second left but a miracle lateral play from the Redblacks fell short and the Bombers held on to win and defend their home field on the night they rose another championship banner.

Despite the loss, we saw a lot of positive things from the Redblacks. Their defense looks great and their offense has significantly improved from last year with a talented group of receivers and Masoli at the helm. If the Redblacks are able to fix the little mistakes they make here and there (i.e. manage the clock better before halftime, catch wide-open passes, and secure interceptions), they’ll be able to win a lot of games this season. However, against the best team in the CFL, the Redblacks proved they will be able to compete for a playoff spot – and potentially more – this season.

Things are looking up this season in the Nation’s Capital.