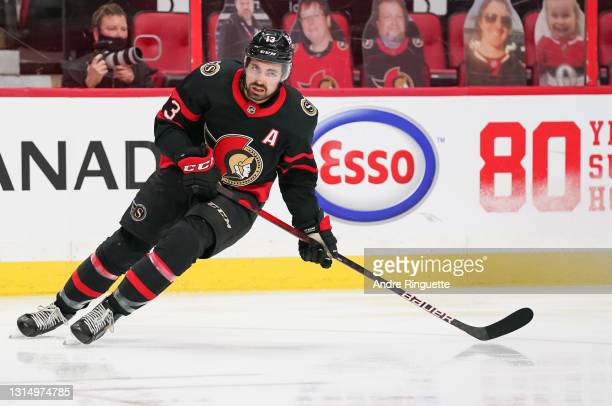 The Ottawa Senators got the ball rolling a day early on their trade deadline moves this year. Some of their moves have seemed at first glance to be favorable for the team moving forward. However, as is always the case with Senators’ management, some of the moves have also left fans and pundits scratching their head looking for an explanation. With that said, let’s take a look at the moves the team has made.

Vancouver Canucks acquire: their own 2022 3rd pick (previously acquired by OTT from VGK)

This move certainly appears to be a questionable one for the Senators on paper. Hamonic will be 32 at the start of next season and is still signed for next season at a $3 million cap hit. Based on various analysis and reaction to this move online, Hamonic is nowhere near the player he was a few years ago and this move is a pure cap dump for the Canucks. He was even on waivers earlier in the season and went unclaimed. This is where my issue with this trade lies, and where the issue with many trades during Dorion’s tenure lie.

This seems like such poor asset management by the team, giving up a valuable draft pick for a player that 30 other teams have passed up this season. If the Senators feel they could get something useful out of Hamonic that’s one thing, but the team should have been receiving a draft pick to take on his contract not giving one up. The Canucks of course then turned around and flipped a third round pick to the Leafs for Travis Dermott who is younger, cheaper and has been better than Hamonic this season. Hopefully this deal somehow works out for the Senators, but the early signs point to another Derek Stepan level acquisition.

This move was a good one for the Senators all things considered. It became clear to fans in the weeks leading up to the deadline, as we’ve seen a painful amount of times the past few years, the Senators and a player who wanted to stay in the city weren’t going to come to an agreement on a contract. With that in mind, the Senators were going to have another valuable asset to move that many teams would be interested in. After failing to take advantage of that same opportunity with Mark Stone, I think the Senators did well here to get good value for Paul.

Joseph is a useful player who is younger and whose next contract will likely be cheaper than Paul’s. The two players provide similar on-ice value and Joseph has a good relationship with Thomas Chabot so this player swap appears to be a net-positive for the team. Acquiring an additional draft pick also never hurts. This deal appears to be a much better one at first glance for the Senators than the previous one they made.

Forsberg has been hands down the team’s best goalie the past two seasons. The Senators’ Matt Murray experiment has been a failure to date and Filip Gustavsson has experienced major regression this year. With this in mind, the team couldn’t afford to let Forsberg walk if they plan on being even remotely competitive next season. However, this move gets questionable when looking at the rest of the team’s goaltending contracts next year. Murray carries a $6.25M cap hit for next year and Gustavsson’s contract becomes a one-way next season. It would be very odd for the Senators to carry three goalies on one-way deals next season, so I would expect move in the crease to come at some point before next year.

Overall, this contract is a relatively low cap hit for the value Forsberg has provided the team and seems like a good deal. The only cause for concern is the Senators have been burnt multiple times in the last few years over-committing to goalies who have played well in small sample sizes with the team. The organization will be praying that Forsberg is more of a Craig Anderson breakout story than a Andrew Hammond or Mike Condon one. Otherwise they will be saddled with yet another bad multi-year contract.

This is a great move for the Senators if for no reason other than addition by subtraction for the team’s blueline. Brown for essentially his entire Senators tenure was a major detractor on the team’s blueline. Also, by no fault of Brown’s, DJ Smith for some reason would refuse on ever removing him from the lineup as a healthy scratch. There has been countless games this season where defensive misplays by Brown would result in the puck in the back of the Senators’ net. Dorion forcing Smith to no longer being able to play Brown every night is a huge victory for the team.

That alone would make this trade a win in my mind. However, the team also acquiring a very productive AHL player in Senyshyn is a major plus. The Senators will likely be calling up multiple players down the stretch from Belleville at various points to close out the season. Acquiring a player like Senyshyn will allow them to do this while not leaving Belleville high and dry trying to make a playoff push. The Senators still have multiple highly regarded prospects in Belleville that will benefit from that team doing well. Overall this trade is a great move by Dorion.

The writing had been on the wall for quite some time that Sanford’s time as a Senator would not be very long. Since he was first acquired from the Blues it has been clear to many that Sanford didn’t have much interest in playing in Ottawa. With that said, being able to move him out for a draft pick is tidy work by Dorion to clear out some more dead weight on the roster. The issue of course is that this was more dead weight brought in by Dorion that once again didn’t provide much to the team. This move will clear more space on the roster for some prospects to get a look down the stretch, but all in all this trade doesn’t move the needle much.

Overall the Senators were pretty active at this year’s deadline. The biggest move of course was moving out Paul to the Lightning. The theme of this deadline for the most part was trimming the fat from this roster. This however, makes the Hamonic move all that more confusing by adding a player that is very similar in quality to what is already on the roster with guys like Zaitsev and Del Zotto. It will be interesting to see how these moves play out in the future for the team. I think I speak for all Senators’ fans when I say that hopefully this is the last deadline where the team are sellers for a long time.