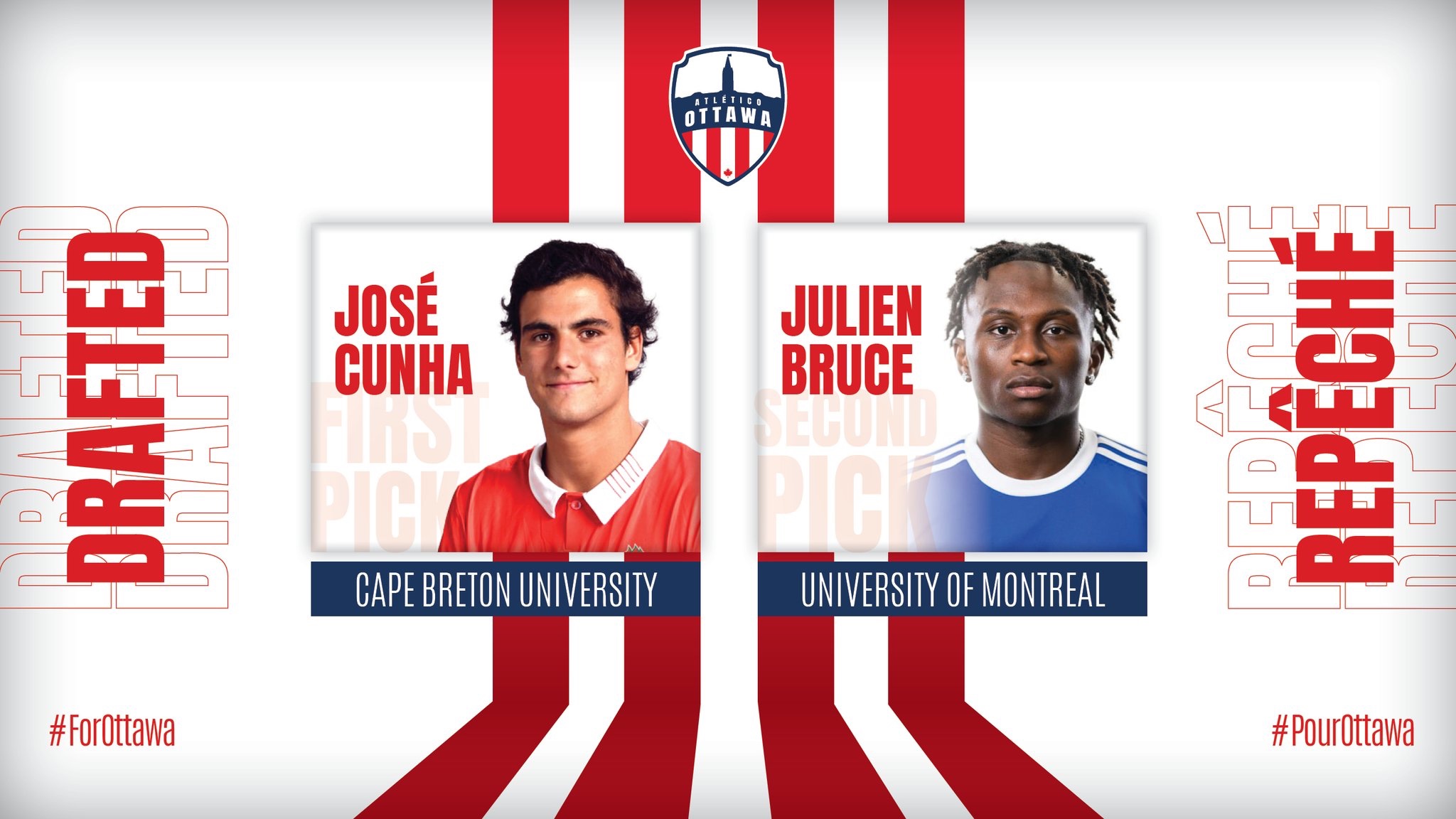 On Thursday, January 20, the Canadian Premier League held their third U-Sports draft. The draft saw a new format used this year for teams making selections. This year the league decided to abandon the previous method of drafting using a snake order. Instead of a team picking first in one round and last in the other, they would simply make their selection first in both rounds. This new format benefitted Atletico Ottawa as they got to pick first in both rounds based on their last-place finish the prior season.

Atletico Ottawa had the opportunity to select first from the 165 declared prospects who were eligible to be drafted. In the lead-up to this years draft, there was a lot of speculation and debate as to who Atleti should use their pick on.

Unlike more established drafts such as the NBA draft or NHL draft, the U-Sports draft doesn’t usually have a clear pecking order. This made it relatively impossible for fans around the league to guess which players would be selected where. Additionally, this made it extremely difficult for many fans and journalists to try to make a mock draft predicting where in the draft prospects would land.

This uncertainty makes the CPL draft unique and keeps the eyes of fans glued to every decision made on draft night. The uncertainty of every pick, of course, is always in question until the selection is made. However, it could be argued that the draft should become more of an event where a general consensus can be built around top prospects so as to at least make the first few selections of the draft more predictable for supporters.

In the end, each club attacked the draft in a different way. Some opted to take local talent in their area; some drafted the best available, some opted to draft based on urgent necessities to fill vacant places in their squad and some clubs a mixture of all these. This resulted in some players falling, some being taken ‘from off the board’, and some reuniting with coaches they have previously played/trained under. With so many methods of drafting and such a small sample size of previous draft picks with the league being so young, the best method of drafting is still yet to be defined.

However, when it came to the team from the Nation’s Capital, les rojibllancos decided to secure the services of highly touted left-sided center back Jose Da Cunha from the University of Cape Breton. Jose whose pick was announced by Atletico Madrid starlet Joao Felix was one of three Capers to be selected in the top four of the draft. The others being Kairo Coore and Raine Lyn, with the former being a popular pick to go number one by many Atleti fans on social media who created the hashtag #DraftCoore.

Jose Da Cunha will look to strengthen the currently thin backline of Ottawa, which has currently only confirmed the signings of vice-captain Drew Beckie, Miguel Accosta and Zach Verhoven. In addition, fans will hope that Da Cunha can work towards filling a void on the left side of a center-back pairing that was left by club captain Milovan Kapor. Jose Da Cunha was born in Portugal and has spent time in the Sporting CP academy, which is a prestigious academy that has produced the likes of Cristiano Ronaldo, Luis Figo and Paulo Futre to name a few. Not only is Jose a centre-back, but he can also slot into the midfield as a holding midfielder. “He brings flexibility, is strong in the air and defensive actions and what stood out to us was his ability with the ball, “said CEO Fernando Lopez.

With Ottawa’s second pick, they went in a direction not many people would have predicted. Many would say that this pick would fall under an off-the-board pick. The club drafted the quick winger Julien Bruce from the National Champions Montreal Carabins. At first, many wondered who he was and what he brought to the table, but after a quick round of youtube scouting and some eyewitness accounts, people realized just what he could do for the club. Julien at university Nationals showed why he could be a crucial piece on this year’s team. He may not have numbers that jump out at you with his three goals and two assists in twelve matches, but he is more than the numbers imply. Julien is a native of Paris. France, not Ontario. He played in the PSG academy and is a very athletic winger who can play on both wings. This versatility, if used correctly, could add another needed weapon in Ottawa’s attack, which finished second-worst in the league for goals for with thirty just beating out Halifax’s total of twenty-eight.

Although Atletico made good picks and the impact of the draftees are still yet to be seen, some Atleti supporters were left wondering why the club did not opt to go for local talent by way of Carleton University. Some had claimed it is not making the greatest use of the number two university in the nation especially when they had highly touted players such as Raphael Garcia, Gabriel Bitar and Tareq Hamad, who were high on various people’s draft rankings.

It is tough to dissect how well Atletico Ottawa did in this draft because their approach may or may not work out. But the draftees still have so much to prove. If the draft picks make the team, this will have been a great draft. If they don’t, it will be seen as poor scouting especially seeing that Ottawa had the first pick in both rounds. Fans should be very proud of the team’s selections. And remember, just because some highly touted prospects were not drafted by the club, it does not mean they can’t come on trial and secure a possible developmental contract—much the opposite.