By The Numbers – World Junior Edition 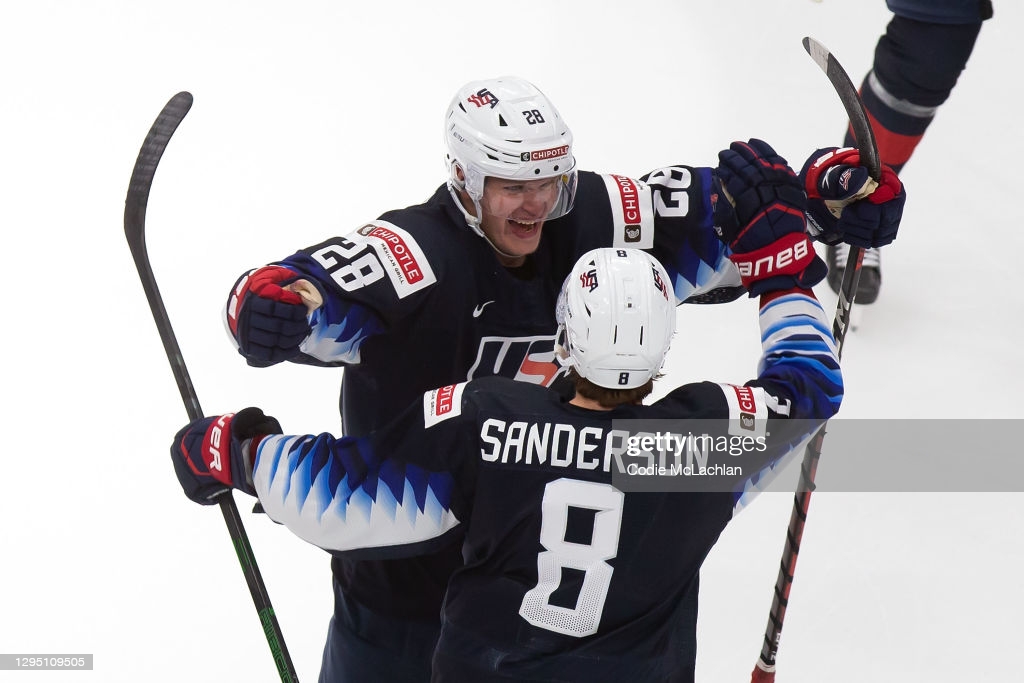 The holiday season is my favourite time of year because it’s a time to relax, reflect and rejoice in the love of family and friends. It’s also when the World Junior Hockey (WJC) Championships take place…the greatest tournament on the planet, in my opinion.

This week’s edition of By The Numbers will focus on the WJC from an Ottawa Senators perspective as we take a closer look at the four Sens prospects participating in this year’s tournament.

This is the first time I can honestly say that I am very excited to watch Team USA games at the WJ, and you can thank Jake Sanderson for this. At last year’s WJC, Sanderson played seven games and tallied two assists and was a plus-seven as he helped the Americans win the gold medal in a very strong performance against our beloved Canadians.

This 19 year old brings good size to the back end at 6’2” and 185 pounds. He is expected to join the Sens shortly after his NCAA season ends with the University of North Dakota (UND). In 15 games with UND this season, Sanderson has six goals and 13 assists, good for 1.27 points per game.

This elite level prospect seems to have it all…size, speed, and superb hockey sense. He knows when to join the rush, when to pinch in the offensive zone, and when to back off. He is disciplined, physical, and creative. He does everything at an elite level.

That being said, it will be important for Sens fans to remain realistic and not expect Sanderson to play at this level in the NHL immediately. There will be a period of adjustment as he learns the NHL game. So, look for Sanderson to make a big impact with the Senators in the 2022/23 season.

Ridly Greig will be the lone Sens prospect representing Team Canada at this year’s WJC. This 19 year old is having a great season with Brandon Wheat Kings, scoring 14 goals and 14 assists in only 19 games (1.47 points per game). This is a considerable improvement from his previous season, where he had 1.07 points per game, which is still very good.

What makes Greig such an exciting prospect is the physical component that he brings. Don’t let his size fool you, at 6 feet tall and 172 pounds, Greig does not shy away from contact and scrums, and has no problem going to dirty areas of the ice.

This prospect will be representing Team Finland at this years WJC as he takes a break from the Sens AHL affiliate, the Belleville Senators. Here is a breakdown of his time with Belleville so far:

This Left Winger comes with good size (6’3”, 198 pounds) and has a lot of offensive upside. He anticipates the play very well in the offensive zone, and can pull off some pretty impressive moves while playing at full-speed. He also possesses very good speed, a fantastic shot and is also an elite level passer, making him a very serious offensive threat.

At only 17 years old, Järventie was one of the most dominant scorers in Finland’s second-highest professional hockey league where he scored 23 goals and 15 assists in 36 games.

The down-side with this prospect is that he can be a bit lackadaisical in his own zone, leading to bad positioning and goals against. So there is some risk involved with this pick.

Also making his second appearance at the WJC, this American born defenseman is also a teammate of Jake Sanderson’s playing for the UND. At 6’4” and 213 pounds, Kleven is a beast on the back end. He averages a point every 3 games, so putting up points is not his thing. You are more likely to see his name in the penalty part of the scoresheet as he has 58 PIMS in 19 games played so far at UND.

Kleven is more of a one-dimensional defender who excels at stopping the opposing teams rushes and directing the puck carrier towards the boards. His first pass out of his zone has been very good as he is able to find teammates moving up the middle. His big body serves him well in the offensive zone with a booming one-timer, which he occasionally finds a teammate with a deceptive shot-pass for scoring opportunities.

Now that you know more about these Sens prospects, I wish you all Happy Holidays and enjoy this year’s WJC tournament. I would love to hear your feedback, so leave a comment below and don’t forget to follow me on Twitter @SensStuff.

By The Numbers – Ottawa RedBlacks Edition

Ottawa sports By The Numbers