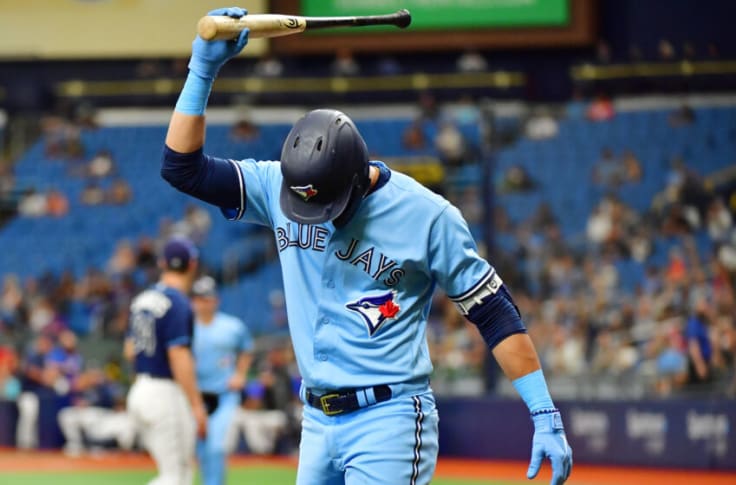 The Toronto Blue Jays took care of business with a commanding 12-4 win over the Baltimore Orioles on Sunday to close out the season with a record of 91-71. They went to the locker room in a jubilant mood looking forward to the potential of playing postseason baseball in the next few days.

However, a walk-off RBI single from Aaron Judge lifted the New York Yankees to a 1-0 win over the Tampa Bay Rays and a two-run home run from Rafael Devers in the ninth helped cap off a 7-5 win for the Boston Red Sox who trailed 5-1 earlier in that game against the Washington Nationals.

With a win from both the Yankees and the Red Sox, the Blue Jays were officially eliminated from post-season contention. They missed the playoffs by just one game. Of course, coming short of the playoffs hurts, but knowing that they played meaningful games in late September, early October is a huge success for this young team.

The Blue Jays had quite the eventful season. They played their home games in three different ballparks and played well at each one, they lost many key players to injuries throughout the year, their offense clicked all season long, and their bullpen, after struggling for the first half of the season finally received some depth at the trade deadline which propelled the Blue Jays on a late-season run.

Despite a 91 win campaign, their best season since they went 93-69 en route to the ALCS in 2015, the Blue Jays finished fourth in the AL East. There were four teams in the AL East with over 90 wins. That is remarkable and shows how tough it is to win in the AL.

Second baseman Marcus Semien said, “We became the best team in baseball, but it was a tick too late.” He believes the Blue Jays will make the playoffs and could possibly win the division next season.

However, this team knows it’s not the end. They are a very young team with a lot of talent and playing high-stakes games towards the end of the season is a great learning experience for these guys.

Also, next season, they will play all their 81 home games in Toronto instead of being forced to play in Buffalo and Florida because of COVID-19. Based on the way the fans in Toronto reacted to having the Blue Jays back, it will give the team the boost they need to win a few more games here and there. Also, the Blue Jays only played in front of 15,000 fans at the Rogers Center except during the last homestand of the season where they played in front of 30,000 fans. Imagine next year when Rogers’ Center is at full capacity with 53,500 people cheering on the Blue Jays every night. Not to mention, playing in Toronto the entire year will reduce travel and help the team be more rested.

The Blue Jays will use this shortcoming as motivation to be even better as a team next year, which a lot of World Series Champions do the season before they become World Champions.

Many fans will look back to this season and point out the early season bullpen struggles for why the Blue Jays lost games and therefore missed the playoffs. At one point, the Blue Jays lost eight relievers to injury, which contributed to some late-inning losses.

They addressed this issue and added more talent and experience at the trade deadline, but they will have to continue improving the bullpen this offseason by adding one or two more veterans to help the young closers. Jordan Romano, Adam Cimber, and Tim Mayza are all reliable closers, but you can never have too much depth. Relievers like Mark Melancon, Kendall Graveman, and Ian Kennedy are all free agents.

However, it wasn’t just the bullpen. Charlie Montoyo made some questionable decisions regarding his rotation and who to play in the bullpen and when. Also, the offense struggled at some points during the year, albeit on a rare occasion.

This will be an important offseason for the Blue Jays. The Blue Jays management and front office will do their own analysis and evaluation on where they came up short this year and how they can improve for next year. The Blue Jays have several key free agents like CY Young candidate pitcher Robbie Ray, and an electrifying second baseman Marcus Semien. I’d make it a high priority to sigh both of them as they both had tremendous seasons.

But if they could only afford to sign one, I’d take Semien, who contributes to this high octane offense on a regular basis and is a fantastic base runner and a great defenseman who can make any play look easy. He is also a great leader.

The Blue Jays could find another high-profile pitcher to be on the starting rotation in free agency and/or draft someone who they can develop. The Blue Jays pitching coach Pete Walker is one of the best in the league at getting his guys to make the necessary adjustments to deal with any scenario with several unique arsenals of pitches. However, Ray is a very talented pitcher and is not easy to replace.

This offense, which was one of the best in the MLB this year is only going to get better next year after scoring over 260 HRs, having four players with over 100 RBIs, and having Vladimir Guerrero Jr. who tied Salvador Perez with a league-leading 48 home runs. If they can resign most of their key 2022 free agents like Ray, Semien, Kirby Yates, and Joakim Soria, their defense will get better, their starting rotation will improve and they will have a bullpen with lots of talent that plays consistently all season long.

If all goes to plan, barring any major injuries, next year, the Blue Jays have the potential not only to make the playoffs but also to win the AL East, one of the best divisions in the MLB.