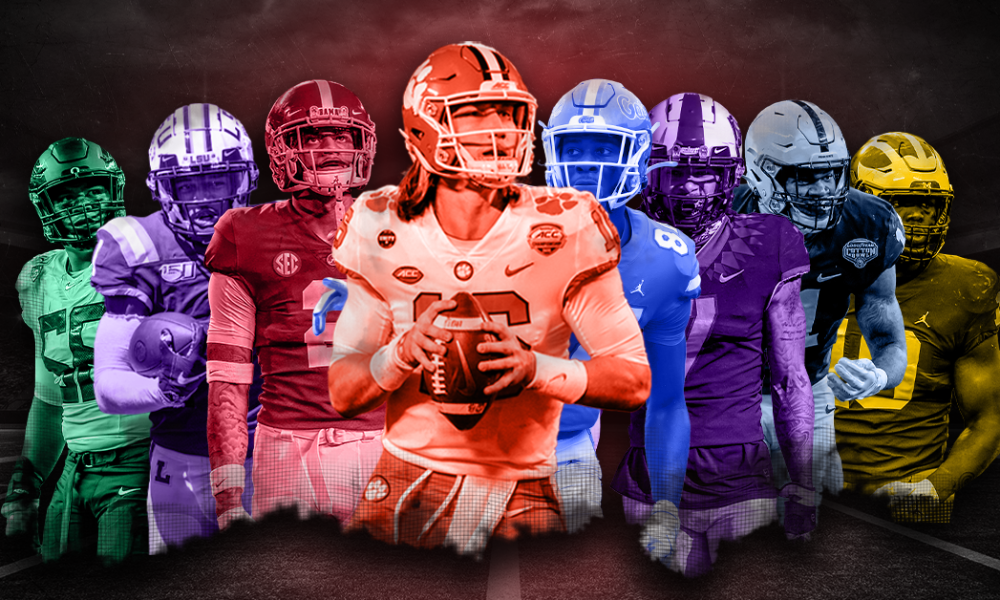 The NFL Draft just wrapped up this past weekend and as 49ers fan it has me more excited than ever. With that said, for all us fantasy football fanatics it also means it’s time to start thinking a little bit about next season. With this article I’m going to take a look at how I would rank the top 10 rookies from the draft for this upcoming fantasy football season. Keep in mind this isn’t a ranking based on players talent, that’s what the draft is for. These rankings are purely based on the opportunity these players will be stepping into and how that will affect their fantasy football stock. Of course everything on this list can change once off-season workouts start and training camp rolls around, but for now let’s get right into it.

Pitts is similar to Harris in my view for these rankings. By that I mean I rank him ahead of some other big names because of the scarcity of quality at his position in fantasy football. Every year there’s only four to five quality TEs in fantasy and then after that you’re scraping the late rounds of the draft trying to find someone who can maybe give you five points a week with a touchdown here and there. Pitts is an athletic freak and is basically an enormous receiver. As we’ve seen in years past, with players like Auston Hooper, the Falcons can support a top tier fantasy TE and the rest of the weapons on their roster. It usually takes a year for TEs to adapt to the NFL and really make their mark, but Pitts is a special prospect. He should be able to provide enough fantasy value even just as a red zone threat with his massive frame until he gets acclimated to the NFL.

Chase will be a dominant presence at WR for the Bengals for years to come, make no doubt about it. However, there are a few things that’ll hinder his fantasy performance early in the season that drops him down to third on this list. First of all, Chase hasn’t played football in over a year and will likely have to shake off some rust at the start of the season. Not to mention he will be going from one of the top college rosters of all time to playing for probably one of the lower end rosters in the NFL. We also don’t know how Chase’s former college QB Joe Burrow is going to look this year after a season-ending knee injury last year. On top of all that, the fact the Bengals also have two other very good WRs in Tee Higgins and Tyler Boyd will hurt Chase’s production early in the year. I know this sounds like I’m negative on Chase, but that’s not the case. I think he is going to have a very productive season, but I just think these are some of the reasons that will keep him from being the top rookie in fantasy.

The Eagles traded up for the WR help they desperately need and took the Heisman Trophy winner Smith to try and fill that need. Smith will be stepping into an Eagles offense that should be revamped after letting go of Doug Pederson this off-season and moving on from Carson Wentz. He also can hopefully establish some early chemistry with another former Alabama player, QB Jalen Hurts. After an uninspiring rookie season from Jaelen Reagor it shouldn’t take much for Smith to earn the trust of the coaching staff and cement himself as WR1 for a team that is likely going to be playing in a lot of garbage time this year.

Waddle and Smith are really interchangeable on this list as they were both extremely dominant last season and should find success in their rookie seasons as well. The only reason Smith beats out Waddle on this list is because Waddle will have more competition on the roster for targets with players like Parker, Fuller and Gesicki. The Dolphins should also be in the playoff hunt this year and might not be willing to trust their rookie as much in big situations during the first half of the year.

Etienne will surely put up decent production this year as he’s an extremely talented player, has a great connection with new face of the franchise Trevor Lawrence and was likely hand picked by new head coach Urban Meyer. However, Etienne is going to have to compete with James Robinson who had an incredible rookie season, as well as veteran Carlos Hyde for touches. There’s a lot of people standing in the way of Etienne getting the ball consistently early in the season.

Williams is an incredible talent out of the backfield, however without an injury to Melvin Gordon at some point during the season he is likely to get stuck in a very frustrating timeshare. Think something along the lines of J.K. Dobbins last season.

The Ravens have been desperate to find a number one WR for Lamar Jackson for years now. They tried to find one in free agency and after failing to do so have turned their eyes to the big body WR out of Minnesota. It’s clear to anyone who has watched the Ravens the past few years Hollywood Brown isn’t that number one WR and can’t stay healthy. The only people stopping Bateman from getting touches in the passing game is injury prone Sammy Watkins and Mark Andrews. Bateman could be a key piece to a fantasy championship run late in the season.

Lawrence could provide good streamer value this season or be a good backup fantasy QB to fill in when your starter is on a bye. Lawrence is a sneaky good runner which provides great fantasy value. He also figures to be playing in a lot of garbage time this season which could help him inflate his numbers. An Urban Meyer offense is also always good to boost offensive productivity numbers.

I had to throw at least one 49er into this list. Sermon was dominant in his last three full games at Ohio State. The crown jewel of these three games was his 331 yard rushing performance against the top five defense of Northwestern. There are a few RBs ahead of Sermon on the depth chart in San Francisco, but all of these RBs have sustained multiple injuries the past few seasons. If someone like Mostert or Jeff Wilson Jr. go down, Sermon could be a league winner. When Kyle Shanahan drafts an RB in the third round this is a situation worth monitoring.