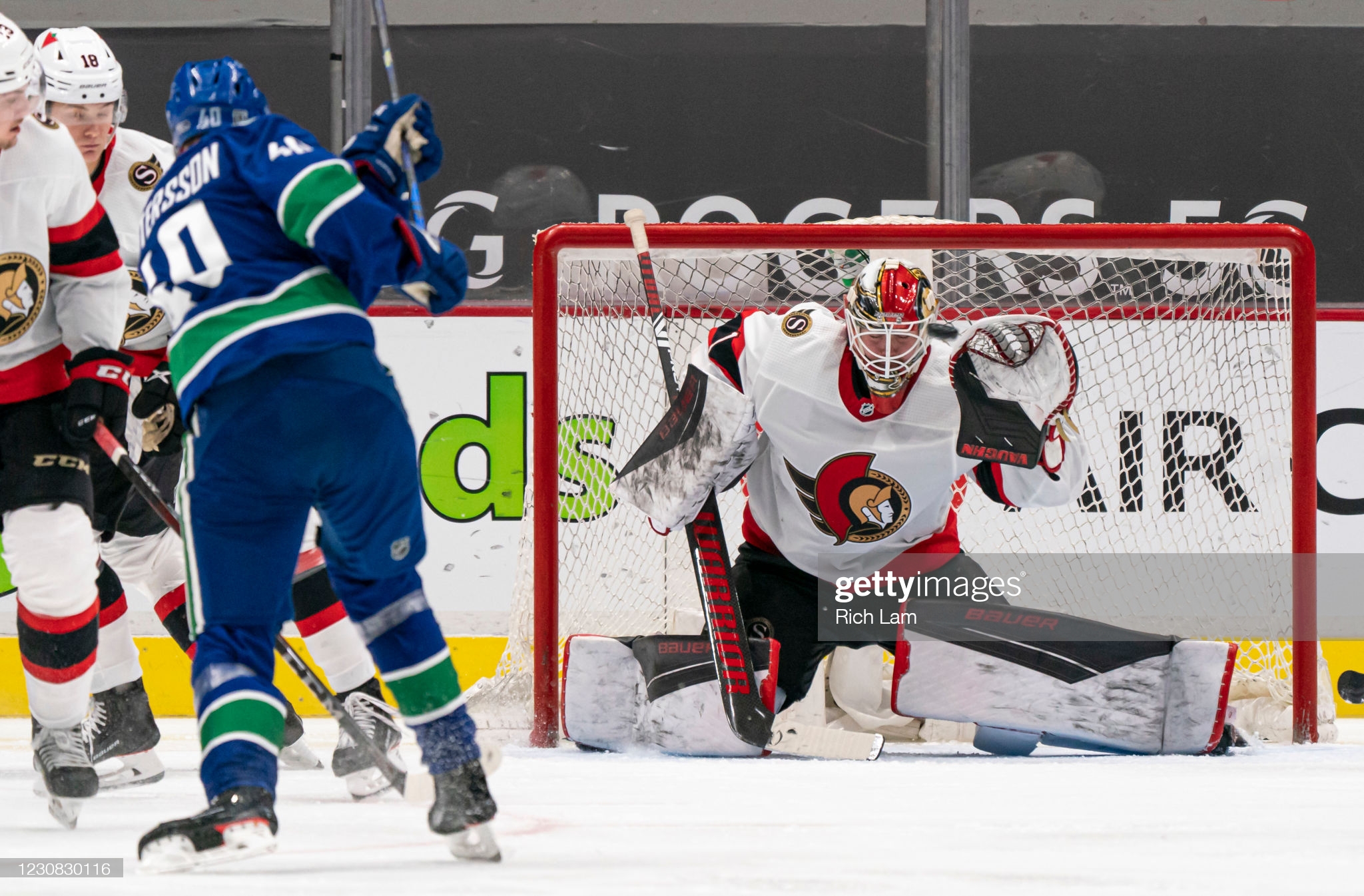 The Senators made some waves on social media Tuesday, when they announced the team would be “re-assigning” goaltending coach Pierre Groulx to a scouting and developmental role.

The team is replacing Groulx with Zac Bierk, who worked with head coach D.J. Smith during his time in Oshawa. In the announcement, Pierre Dorion cited a number of underwhelming goaltending performances this season and said they hope this change “could return some stability to our crease.”

It’s no secret the Senators’ goaltending has been shaky, at best, for the majority of this season. Let’s take a look at the numbers, not just from this season, but recent history with the Senators to see if this is a coaching problem or a personnel problem.

The Senators and their fans have been spoiled for the past decade, seeing elite goaltenders stopping pucks for the Senators such as Ben Bishop, Robin Lehner, and the best goalie in franchise history Craig Anderson. Groulx has been the Senators’ goaltending coach since the 2016-17 season. The goalies he’s coached for the most games in his time with the Senators are Anderson, Mike Condon, Anders Nilsson and Marcus Hogberg.

2016-17 was also the last season the Senators had a winning record, we all know how that season ended. So, this begs the question is the Senators goaltending dragging the team down? Is the team not doing enough to support its goaltenders? Is the answer a combination of both those things plus much more? I would say the third option is the most likely of these three.

Anyone analyzing the last few seasons of the Senators performance needs to take into account the monumental exodus of talent, that saw just about all NHL caliber players traded away by the Senators. The team has the second least points in the NHL since 2017-18, only Detroit has less. Since the team as a whole has struggled so much, we need to examine individual goaltender performances to really paint a larger picture of Groulx’s time with the Senators.

We all know 2017-18 was when the wheels fell off and the team spiraled to second last place. Almost the entire team finished as a substantial minus on the season. This of course isn’t a super important stat, but when it’s as significant as this it’s worth mentioning. Despite all this failure on the ice, Condon was still able to post a respectable 0.902 save percentage in 31 games. Anderson struggled mightily that season though, posting the second lowest save percentage of his entire career. This season can be considered the first knock against Groulx and not just all personnel blame.

The next season goaltending would bounce back even though the team finished in last place. This was the season the team would see the emergence of Nilsson who went from almost out of the league to posting one of the best statistical seasons of his career. Anderson also rebounded somewhat that season even with that dumpster fire of a lineup in front of them. That would be three goalies now who have had one of the best seasons of their career under Groulx, even with a subpar roster in front of them.

We all know how last season went. The Senators were destined for another bottom-three finish before COVID-19 cut the season short. This was probably one of the worst rosters the Senators have iced in a long time and all three goaltenders still somehow posted a save percentage over 0.900. This season was Hogberg’s turn to have the best year of his career statistically. Based on the performances we saw from him at the start of this season, this seems almost impossible to imagine now. Make that four different goaltenders to have one of the best years of their career under Groulx since 2016, I don’t know that seems pretty good to me.

Now that brings us to the current season and the disaster that has been the Matt Murray trade. As things stand, Murray is on pace for his worst year statistically since before he was in the OHL. However, aside from Hogberg and Murray the other three goalies who have played games for the Senators this season have actually been fairly successful considering their lack of NHL experience. So long story short, do the Senators have a goaltending issue or a Matt Murray issue?

The team gave up a second round pick to acquire Murray at the draft last fall and gave him a very significant contract shortly after. Murray hasn’t lived up to this at all so far. There were many, many games early in the season where Murray would give up awful goals that completely demoralized the team. Since the team has found some more consistent goaltending recently they’ve experienced increased success on the ice, getting points in seven of their last nine games.

Based on all things considered, I don’t think the Senators have a goaltending issue and demoting Groulx was a mistake. The Senators problem is their subpar pro scouting that has cost the team over and over again. This time it has cost them a second round pick and now possibly losing one of their young goaltenders in the expansion draft if they choose to protect Murray instead. Let’s hope Dorion can own up to his mistake and correct it before it’s too late.