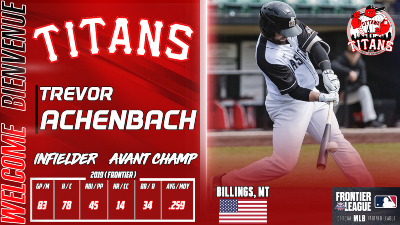 The Ottawa Titans just took care of a piece of their inner defence with the signing of 2B Trevor Achenbach for the 2021 Frontier League season.

Achenbach, 26, spent the 2018 and 2019 seasons under Titans manager Steve Brook with the River City Rascals, hitting a cumulative .287 with 19 home runs and 81 RBI’s, including a 2019 Frontier League All-Star nomination.

“Trevor is a major acquisition for the Titans in 2021,” said Brook. “He is an impact player, an elite defensive 2B, and a tremendous clubhouse addition. I’m thrilled to have him back with me this season and excited to see what he can accomplish in a Titans uniform.”

A graduate of the Oklahoma Wesleyan University (Bartlesville, OK), Achenbach had 19 multi-hit games with the Rascals in 2019.

The Billings, MT, native finished the 2019 campaign hitting .259, ranking tied for ninth in home runs with 14 and he racked up 45 RBIs.

He was acquired from the Sussex County Miners as part of a three-team trade on Dec. 14.

In the deal, the Titans sent Yeison Medina to the New Jersey Jackals along with a player to be named later to Sussex County. The Titans are scheduled to open the Frontier League season on May 27 at RCGT Park versus the Tri-City Valley-Cats. Tickets