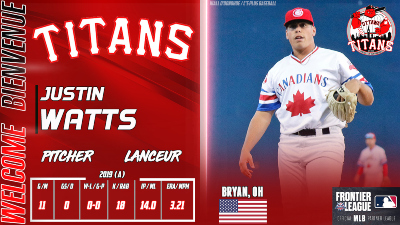 The Ottawa Titans report the ballclub has signed right-handed pitcher Justin Watts for the 2021 season.

The Bryan, OH, native was selected in the 37th round of the 2017 MLB Draft by the Toronto Blue Jays. He brings more depth to the Titans bullpen which already features righties Mateos Kekatos and Cody Mincey.

“Justin brings a lot of depth to our back end bullpen this season,” said Titans manager Steve Brook. “He’s had success with the Blue Jays lower-level affiliates and I’m excited to see what he can do with this opportunity in the Frontier League. I know he’s very excited to get to Ottawa and prove that he deserves to pitch at a high level.”

A graduate of the University of Northern Kentucky (Highland Heights, KY), Watts will enter his fourth full season of professional baseball in 2021.

Watts played alongside major leaguers Alejandro Kirk, Nate Pearson and Dany Jimenez during his time in the Blue Jays organization.

The Ottawa Titans are scheduled to hit the field in late spring of 2021 playing in the Frontier League, a partner league of Major League Baseball.