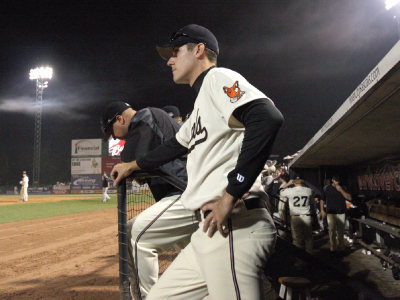 Ottawa Titans manager Steve Brook took time out from getting ready for the ballclub’s inaugural season to let fans get to know him and let them know how player recruiting is going.

Q. What is the best part of being a baseball manager?

A. I love the game of baseball. I love being on the field and competing to  win each night alongside a group of guys who are living out their dreams and playing professionally.

Q. For how many years and where have you been a field boss?

A. I entered pro ball in 2004 and have been managing in the Frontier League since 2010.

Q. What is your favourite memory while being a manager?

A. There are countless fond memories. Probably my absolute favourite would be winning the division series in 2010 on the road before eventually taking the championship in four games.

Q. Have you had a chance to check out Ottawa’s ballpark? What are your thoughts and what have you heard about the field, its dimensions and wind tendencies?

A. I have yet to physically be in the stadium, but I’ve heard stories for sure from players and other coaches/managers. I know it can be a defensive based ball park at times and can be quite windy.
(Steve: One thing to watch out for when getting snacks and drinks from the concessions is the concourse can turn into a chilly wind tunnel.)

A. I recruit pitchers who pound the strike zone. I love guys who have quality strikeout/walk ratios in their careers. With that being said, I recruit quality people above all else. Having a solid group of guys who work hard together and produce a positive clubhouse is extremely important. This helps you ride out the storms that come in a long season and keeps you together for a playoff push.

Q. Are there any players in the California Winter League you’ll be waiting to hear about?

A. I typically get information on players from the California Winter League directly from the Frontier League office in the early winter. I’ll be excited to take a look once this information is available and see who could potentially be selected.

Q. Local pitcher and fan favourite Phillippe Aumont had a successful run as a starter for the Ottawa Champions and he was in spring training with the 2020 Blue Jays. Have you thought about bringing him out of retirement?

A. I’ve been in contact with Phillippe and I am still awaiting a decision on his end.

Q. Are there players you’re in negotiations with that will sign with the club soon?

A. Yes there are always players who I am recruiting before, during and even after the season. I am happy with the start that we have thus far in the off season and am excited to complete the roster as we move into the spring.