Brooke Henderson to play at Diamond Resorts Tournament of Champions 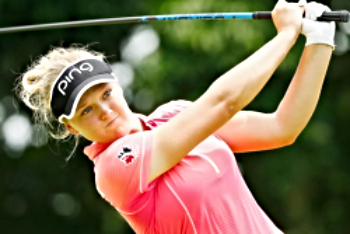 Brooke Henderson is about to join a field filled with LPGA winners, entertainment celebrities and superstars from the world of sports at the Diamond Resorts Tournament of Champions from Jan. 21-24.

Henderson qualified for the 2021 event by having won two titles in 2019 (the Meijer LPGA Classic for Simply Give and the 2019 LOTTE Championship). She finished T4 in the 2020 Diamond Resorts Tournament of Champions with Mi Jung Hur of the U.S. The women banked $74,933 each for their efforts.

Last year’s winner was Gaby Lopez ($180,000) who won in a playoff over Nasa Hataoka and Inbee Park. The 2020 Celebrity champion was former MLB pitcher John Smoltz of the Atlanta Braves.

As an official LPGA event, the tournament features LPGA winners from the previous two seasons competing for $1.2 million in official prize money.

While the LPGA pros play 72 holes of stroke play with no cut, they’re to be joined on the course by up to 50 sports and entertainment celebrities competing for their own $500,000 purse using a modified Stableford format. A group of amateur golfers, who qualify during the event’s pro-am, also play alongside the stars during official tournament rounds.

All four days of golf and entertainment from the Tranquilo Golf Course at Four Seasons Golf and Sports Club Orlando in Walt Disney World Resort will be televised, with Thursday and Friday on Golf Channel and Saturday and Sunday on NBC.

The celebrity and sports stars lineup features baseball legends Roger Clemens, Tom Glavine, Tim Wakefield, Phil Nevin, Brian McCann and Greg Maddux, football Hall of Famer Marcus Allen and TV personality Ben Higgins, who starred in season 20 of ABC’s The Bachelor. They are a few in the stellar lineup of athletes and celebrities.

-with files from Diamond Resorts Tournament of Champions