Ottawa 67’s week 24 Review, Week 25 Preview: Back into the Groove and Clinch the East Division 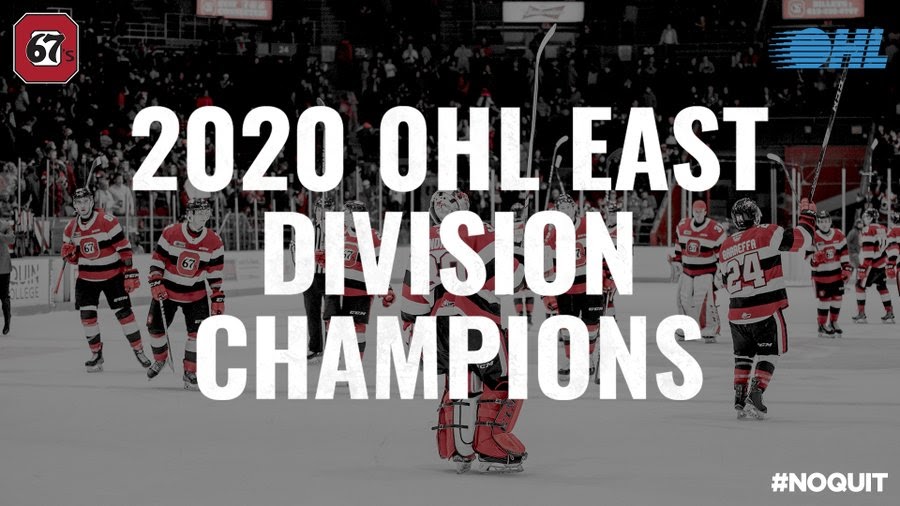 Vs. Oshawa: The 67’s opened the weekend with what would turn out to be their most dominant game. Despite the dominance, the 67’s would still be outshot 38-34 by the Generals who were looking to hold their place above the Peterborough Petes in the standings. The 67’s would kick the game off with a goal on the power play. For anyone who thinks Marco Rossi can’t shoot, this goal single-handedly proves you wrong. The shot touched some iron before banking behind Jordan Kooy to give the 67’s a 1-0 lead. That was the only goal of the period. Ottawa takes a 1-0 lead into the locker rooms. Cam Tolnai would give the 67’s their second goal of the game on a breakaway. The goal needed to be reviewed, but after review, the puck clearly crossed the line, it was 2-0 Ottawa. Towards the end of the third period, Brett Neumann would score on a shot that had eyes of its own, leaving little chance for Cedrick Andree to stop it. With 2:27 to go, it was a one-goal game. Despite the Generals scoring to make the game close, the 67’s would add two goals on the empty net and win the game by a score of 4-1. With the win, my predictions record improves to 44-13.

This game saw one of the best goaltending battles you will see. Both Cedrick Andree and Jordan Kooy were fantastic, but Cedrick Andree was thankfully able to get the better of the Generals and Kooy on the evening.

This game was also the Punjabi broadcast for the 67’s. Take a look at the call for the Marco Rossi goal early in the game.

Vs. Barrie: There was plenty of hype heading into the first-ever battle of the Clarkes, and the game was on Sportsnet to boot. The 67’s would have plenty of chances to score to start the game, but nothing would go. That is until Jack Beck tapped the puck into the wide-open cage after a great display of patience from Mitch Hoelscher. Just minutes later, the 67’s would take a two-goal lead after Daylon Groulx scored from behind the net. Midway through the second period, Evan Vierling would get one of the luckiest bounces you will ever see, and Will Cranley found himself on his butt on the wrong side of the crease after he barely got a piece of the deflected point shot. Vierling would put the puck in the open net to make it 2-1 Ottawa. One of the only weak spots on the night for Will Cranley came on the Colts’ second goal when Tyson Foerster scored five-hole on a one-timer. This would have been a tough save, but Cranley was in the right spot, he just couldn’t get into his butterfly fast enough. Just like that, we have a 2-2 hockey game. Just over a minute later, Joe Garreffa was in the right place at the right time to flick the loose puck into the net, restoring the lead for the 67’s. After one of the weakest slashing calls I have ever seen, the Colts scored just mere seconds after the power play ended. The Colts only had three shots in the third, but they made the most of them. The game headed to overtime. After a great individual play from Garreffa, Cam Tolnai let a laser go, beating Arturs Silvos, giving the 67’s the extra point and the victory over the Colts.

Once again, there was some great goaltending in this game. Will Cranley put on a show at times and looked sharp. It’s great to see him come alive after the struggles he had early this season. He could be turning the corner and becoming a reliable OHL caliber goalie. Only time will tell where he ends up, but he is making a case to get a look from NHL scouts in his draft year.

With the win, my predictions record has improved to 45-13. No bonus points for predicting overtime though.

@Oshawa: The Generals headed home after the game on Friday night and had the chance to have the day off Saturday while they waited for the 67’s to arrive in Oshawa. This game would start the same way the other did this weekend, with a 67’s goal. This time, it was Jack Quinn banging his 48th of the year home on the power play. The Generals would answer back early in the second period on the power play to make the game 1-1. Marco Rossi would fire another laser past Kooy to give the 67’s a 2-1 lead. Here is a look at the goal considering it was too good for you not to see!

Tye McSorley of the Generals would take a five minute major for slashing Jack Quinn in the undesirables, but the 67’s failed to capitalize on the power play. Despite the big kill for the Generals, that momentum was short-lived. Mitch Hoelscher was wide open on that the side of the net, and tapped the puck in to give Ottawa a 3-1 lead. Lleyton Moore would take over the game at this point, scoring two consecutive goals to tie the game at three and send the game to overtime.

In overtime, Marco Rossi crossed the Oshawa blue line and was hit in the face with a high stick, but there was no call. The Generals broke out the other way, but Marco Rossi was given an interference penalty. This was one of the worst calls ever made in the history of hockey, but the 67’s didn’t let that get to them. Here is what happened.

The 67’s take the win in overtime (like I predicted) improving my record to 46-13. The 67’s wouldn’t have won this game without Cedrick Andree, so let’s take a minute to appreciate his efforts on the night!

Here is a look at the overall standings.

The magic number for the 67’s is now nine points. The Knights can only get to 104 points, leaving the 67’s in the driver’s seat. Things are looking good for Ottawa to get it done, but London will not be going down without a fight.

@Barrie: The Barrie Colts just gave the 67’s all they could handle last week, but the two are going to meet again on Saturday night. I gave you the whole spiel about the Colts wanting to catch the Wolves for first place in the Central division. This week, I will take a look at the schedule for both teams in the days before the game.

For the 67’s, rest. Lot’s of rest. Ottawa will have almost a week of rest before this game. On the flip side of the coin, the Colts are in the last game of a three in three. The Colts will be playing the Wolves, the Rangers, and Ottawa. Not a single easy game for the Colts, in fact, they get harder as the three in three progresses.

Bus legs shouldn’t be an issue for the 67’s, and normally I talk about how travel could be harder for the 67’s, but this game is different. With the amount of hockey the Colts are playing, the 67’s should be able to take this one much easier than the contest last week. The Colts need this game, but they will give the Wolves all they can handle, and the Rangers are a fantastic hockey team as well.

After last weekend, the 67’s will be looking to come out of the gates hot, especially against the team who they played their weakest game against. I would expect to see Cedrick Andree in this game, and that should be a concern for the Colts. With all things considered, this is a very winnable game for the 67’s, and they will be able to get it done. Ottawa takes the game in Barrie by a score of 6-1.

@North Bay: Ah yes. The North Bay Battalion. I guess this time I can’t clown on the Battalion, but that doesn’t mean that I think the 67’s are going to do the unthinkable again. When these two teams last met, the 67’s were embarrassed by the Battalion who played harder. The Battalion certainly aren’t the best team in the OHL, but they are competing for the final playoff spot. They are chasing both the Niagara IceDogs and the Kingston Frontenacs for that number eight seed, but it is much more likely that they will have the number one pick in the draft this year.

With that being said, I can no longer say it would take a miracle for the Battalion to beat Ottawa unless you consider Ottawa playing a bad game a miracle. Ottawa will be seeking revenge, and they should be able to do it in a big way, but nothing is ever certain in the OHL. This time around, however, I expect the 67’s to play much better than the last time, and they should take this game by a large margin. I’ve got the 67’s by a score of 8-3.

Vs. Niagara: The IceDogs have been brutal since the trade deadline when they traded just about everyone worth anything on the roster. Thanks to that, the IceDogs are now fighting for the last playoff spot in the East with the Frontenacs and the Battalion, but are 1-8-1-0 in their last 10 games. They aren’t good enough to make any noise in the playoffs, but they don’t like the 67’s. There is a rivalry between the two teams that were developed over the years of meeting in the playoffs, so you can expect an amped-up Niagara team. This is the rescheduled game after the unfortunate events that happened with Niagara in December and will be played on Tuesday March 10th at 7 p.m. so don’t expect a huge crowd. That all being said, the 67’s will be coming off a light weekend and should be rested enough to beat Niagara, and convincingly. The IceDogs won’t be able to bring enough to beat Ottawa, especially not on their own ice. The last game was close, but this one won’t be. Ottawa wins this game 9-4.

Let’s take a look at the Knights schedule this weekend. They will meet Sarnia, Owen Sound, and Oshawa, so don’t expect them to have an off week. Ottawa should be able to get that magic number down to three, but maybe they can clinch the league championship this weekend. That’s wishful thinking on my part, but you never know. Keep this rolling and things will look after themselves. As always, be sure to follow me on Twitter @FrankieVideo for all things 67’s!