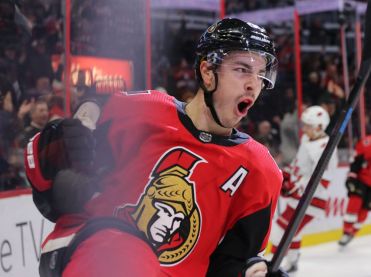 The trade deadline has come and gone and for the past 3 years, this has meant that Sens fans have had to let go of a beloved player. This year, this player is none other than Jean-Gabriel Pageau. The local boy was traded to the New York Islanders for a fantastic return that no Sens fan can complain about with this upcoming draft in front of them.

Pierre Dorion received a 2020 1st round pick (Top 3 Protected), a 2020 2nd round, and a conditional 3rd round pick in 2022 (If Islanders win the cup this year). That is a fantastic haul for a player who is at best a third liner.

Sens fans may be asking why Ottawa didn’t re-sign this veteran, according to reports Pageau was asking for a 5-6 year deal with an AAV of $5 million. He would later sign with the Islander to a 6-year extension with an AAV of $5 Million. No matter how much Sens love Pageau, Sens couldn’t afford to give that kind of extension to Pageau. However, Sens fans everywhere are glad he got his payday.

Jean-Gabriel Pageau is the definition of a local boy. Born in Ottawa, Pageau played his Junior Hockey right across the bridge for the Gatineau Olympiques before being drafted by the Senators in the 4th round of the 2011 Draft. He would then be a member of the club for 8 Years. Pageau played 428 games for the Sens finishing with 87 goals and 182 points. Pageau was a playoff legend for Ottawa, playing 35 games and finishing with 12 goals and 16 points.

His two most famous playoff games are the games against the Montreal Canadiens in 2013 where he scored a hat trick in a Sens 6-1 win at home. This was the game that created the now-famous Pageau Chant (In the tune of Ole Ole Ole). In 2017 Pageau topped that game by single-handedly leading the Sens to a comeback victory over the New York Rangers where Pageau scored 4 goals, with two of them being the game-tying goal with a minute left and the OT winner.

Jean-Gabriel Pageau was the definition of a local boy who captured the hearts of Sens fans everywhere. No matter what situation he was put in, he always worked his rear end off to make sure he gave his best effort. Even coming back from an Achilles injury, Pageau was able to have a career season which earned him a big payday. Pierre Dorion made the right decision in trading him as the return was much needed for the Sens future. However, in the future, Ottawa will need to start re-signing these players that mean so much to the club. Hopefully, after trading Karlsson, Stone and now Pageau, Ottawa will be able to re-sign all the young future stars they have on their team.

I’d like to thank Pageau for all the great memories he gave me. That New York playoff game is one I will never forget. I wish him nothing but the best and hopefully, he wins a cup with the Islanders because that man deserves it. I’m ending off this article with one last Pageau Chant…