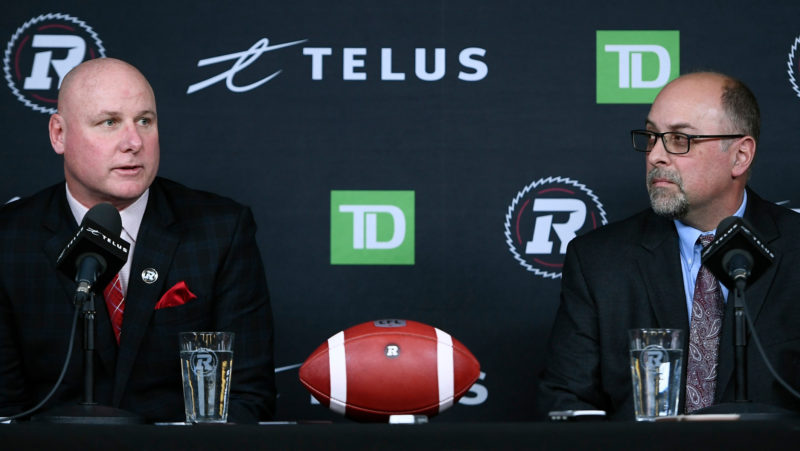 The initial wave of free agency has now passed. The REDBLACKS were very active on the first day, making many big signings to shore up the defense. However, there weren’t nearly as many moves made on the offensive side of the ball.

For those of you who are concerned about the lack of offensive talent, LaPolice has a plan. His offences aren’t usually built around the expensive receiver. Instead, he has a solid quarterback who can make all the throws, a solid running back, and a couple of receivers who step up and become threats on every given play. For LaPolice right now, you could say he has all of those things.

Arbuckle is a good quarterback and will find the receivers if they are able to get open. Arbuckle has a calming presence about him that will only help Ottawa, and Paul LaPolice wanted this kid for a reason. Trust in Nick Arbuckle. LaPolice knows what he is doing.

The REDBLACKS have a couple of solid running backs, including newly signed Anthony Coombs, who signed with the club on Tuesday. Coombs will supply LaPolice and his offence with a release valve, and be helpful for designed passes to the running back. Crockett will likely be the starting running back this year. In only seven games last year, Crockett rushed for 454 yards on 84 carries, but was unable to find the endzone. The REDBLACKS also have Akeem Hunt and Timothy Flanders.

“Lapolice is my guy. We really just talked about life and what his expectation was for the team and what he expected out of me. Talked about the offense and the identity he wanted to create within the offense,” said Flanders.

Flanders will be some depth for the REDBLACKS and could step up and help out the team if they get into injury troubles. The big name here is Anthony Coombs though. Coombs is the player LaPolice wanted, and he’s got him. There is talent at the running back position for Ottawa this year. It’s going to be interesting to see who becomes the starter and what kinds of rotations they use. Anthony Coombs could also end up as a receiver for Ottawa, but since he is technically considered a running back for now, he falls under this category.

Receiver is the biggest question mark going into the season as we stand right now. We could still see some depth players come in, but it looks like the core is going to be Brad Sinopoli and R.J. Harris. Devonte Dedmon and Rafeal Araujo-Lopes look to be ready to take the next step and become starter calibre players as well.

Devonte Dedmon could be the key piece for the REDBLACKS offence. We know Dedmon can be a dynamic player and the deep threat Ottawa needs. Now, the question will become can he make the transition from kick returner to deep threat receiver. If Dedmon is able to make the transition, Desjardins will look like one of the smartest general managers out there for not spending  on big names. However, if things fall flat, Marcel could be out of a job before seasons end.

The REDBLACKS offensive line last year was okay at best. Not much has changed about the unit, and no one has been signed. We should expect the same thing out of them this season. We will see an offensive line that can protect the QB, but will struggle with the league’s elite pass rushers. The line isn’t great, and they aren’t terrible either. They will get the job done, but Arbuckle should be prepared to take some hits during the season.

The offence could be better this season despite only adding a few pieces. If everything goes according to plan, the REDBLACKS will have an offence that can score some points and allow their defence the chance to win them the game. The offence won’t need to be dominant, they just need to be competent. If the REDBLACKS are able to score 25+ points per game this year, they should be able to win more games then they lose. Only time will tell, but the foundation is being built, and I like how it looks so far.