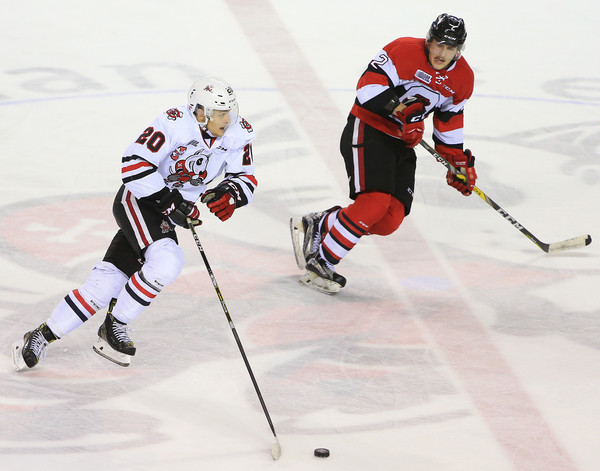 The Ottawa 67’s are coming off another good weekend if you only look at the scoreboard, but if you watch the games as closely as I do, you may have seen some things that are of concern. I won’t be tearing a strip off of anyone as no one deserves that right now, but I want to highlight some of the things that need to be corrected as soon as possible. I hope you enjoy this week’s review!

Vs. Flint: It took forever for the first goal of this game to be scored, but like so many other games this season when the 67’s are at home, it was the visiting side that scored the first goal of the game. It was a pass from Vladislav Kolyachonok that didn’t hit the ground before the Ottawa blue line to spring Brennan Othmann on a break away, and Othmann would bury it behind Cedrick Andree to give the Firebirds a 1-0 lead going into the intermission. It only took the 67’s 32 seconds to get on the board when the second period started. Mitch Hoelscher flicked on on net and beat Luke Cavallin somehow. The 67’s would also score the next two goals of the game. The first of the pair came from Jack Quinn on a beatuiful passing play, and the second from Marco Rossi on another great pass from Joey G. Just when it looked like the 67’s might be pulling away, Flint reminded us that they too are a solid hockey team. The Firebirds would score two quick goals to end the second period and send the game to intermission tied at three. With five minutes left in the game, Garreffa managed to put the 67’s up by one. The game was far from over however, and the Firebirds responded on a goal that Cedrick Andree would love to have back. As Jake Durham realized the puck was behind Andree and in the net, he celebrated down the ice and the crowd began to realize that this game was going to be intense right ’til the end. Overtime would solve nothing, and the game went to a shootout. I hate shootouts, but that’s a story for another time. Both shooters would score in the first round, and after the 67’s missed to begin the second round, the Firebirds scored to put the pressure on Ottawa. As Garreffa had done all game, he would bail the team out and score a clutch goal to keep the shootout alive. The goaltenders traded saves until Alec Belanger scored the game winning goal in the seventh round of the shootout.

Vs. Hamilton: The 67’s had a return to form of sorts in this game. There isn’t a whole lot to talk about as this game was 100% dominated by the 67’s. There were a couple of things that stood out to me about this game, and the most impressive of them was the 67’s special teams. All five of the 67’s goals in this game came with the special teams units on the ice. You may think they all came on the power play, but you would be wrong. Two of the 67’s goals were scored on the penalty kill, while three came on the power play. Only two members of the 67’s scored goals on the afternoon, and it was Mitch Hoelscher with two, and Jack Quinn with three.

Will Cranley was great for the most part. Other then an almost goal early and a goal after the buzzer at the end of the period, Cranley looked very comfortable in the net and managed to secure another shut out. It’s good to see the young kid bounce back after the rough game against the Guelph Storm in his last start. Cranley is becoming a better goalie every game we see him, and 67’s fans should be excited about his development. Here are some highlights of the game! With the 67’s win, my record improves to 31-9.

@Oshawa: After an outstanding performance against the Hamilton Bulldogs, the 67’s reverted back to the form of the Flint game. Nothing about this game was terrible, but the 67’s are better. We know they can be better. The 67’s would jump out to a 2-0 lead on goals from unlikely sources (Adam Varga and Alec Belanger). After goals from Ty Tullio for Oshawa, and Mitch Hoelscher for Ottawa, the game sat at 3-1 mid way through the second period. The Generals would score a goal that Cedrick Andree had no chance on, but the goal that bothered me was the third Generals goal to tie the game. The puck trickled through Andree. Much like the Flint game, Andree allowed a weak goal to tie the game. As much as I love Andree, the big save needs to be made when you are up by one goal. Cedrick has made some huge saves, but recently, he hasn’t been as sharp as I know he wants to be.

In the end however, the 67’s would add two more goals and win the game 5-3. My predictions record is now 32-9. Here are the game highlights!

To me, the 67’s haven’t looked like themselves since the Keating injury, and if you thought he was over rated, you have been proven wrong. Despite that, the 67’s have continued to win games and haven’t lost on home ice since November 8th when the Generals were gifted a win after a terrible missed call. Long story short, we have a fantastic hockey team here in Ottawa. Here’s a look at the standings.

Vs. Niagara: The 67’s and IceDogs rivalry goes back to the playoff series that the IceDogs dominated before the 67’s became a force in the OHL. The 67’s have won the only game they have played against the IceDogs this season. This was supposed to be the third meeting, but a previous game was postponed after an incident involving the IceDogs. Please note, this is NOT the make up game for the postponed game on December 15th. The Niagara IceDogs sold just about everything they had at the trade deadline including Akil Thomas, Philip Tomasino, and Kyen Sopa. There is just about nothing left on the Niagara roster and I would be shocked if the Kingston Frontenacs don’t end up catching the IceDogs for the final playoff spot when the season is over. I would expect to see Will Cranley get the start considering the next opponent is one of the better teams in the OHL, but I don’t think that’s going to make a huge difference. There is nothing about the Niagara side that scares me. Jack Quinn, who is the 67’s 5th leading scorer right now with 55 points would be the leading scorer on the IceDogs. This game should be won easily, and I expect a blowout. I’m taking Ottawa 8-1 in this game.

Vs. Saginaw: The Saginaw Spirit are currently the number six team in the entire OHL and are seriously pushing for a Western conference championship. Unlike the IceDogs, the Spirit are a good hockey team and scare me. The 67’s have more than enough horses to keep up with a very good Spirit team, but the Spirit will be looking to make a statement when they are in Ottawa on Sunday afternoon. The Spirit beat the 67’s in their last meeting, and I think the outcome for Sunday’s meeting will be the same kind of story. The game was very close and Ottawa didn’t shoot the puck very often. I think the way the 67’s have been playing for the last two weeks could continue, and if it does Saginaw is going to win this game. I’ve got the Spirit in this one by a score of 3-1 simply because I think they are going to want to win this game more.

So there we go. Another week in the books and a light weekend for the 67’s finally. Taking advantage of this weekend is going to be important as the long home stand is finally coming to an end. Starting next week, the 67’s will play four of their next five games away from home. We can only hope that the struggle turns out to be nothing and doesn’t develop into something worse.

As always, be sure to follow me on Twitter @FrankieVideo. Feel free to interact with me, especially about the 67’s!